The horror of shopping during the media-caused apocalypse! 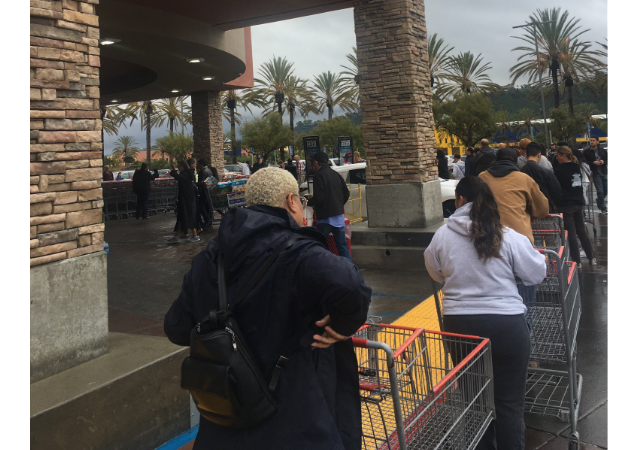 While President Donald Trump, his Coronavirus Task Force, and CEO’s of major retailers were holding the press conference to discuss the Wuhan Coronavirus national emergency, I was caught in a media-induced buying frenzy.

Normally, I shop on Friday mornings and buy enough groceries for the following week, as there is nobody shopping at that time. Not today.

We were out of toilet paper….and so was the store. 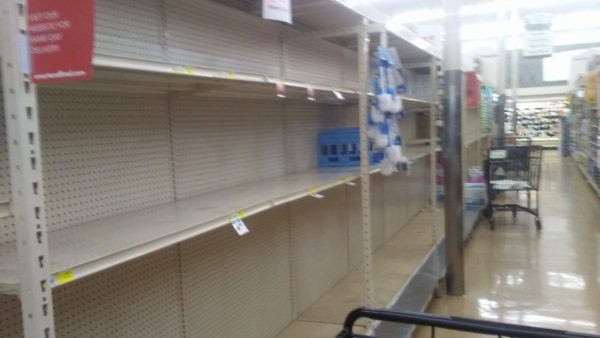 As I dodged other shoppers, searching for hand soap and toilet paper alternatives, I overheard a few comments of interest. A couple was shopping with their young son, who is now out of school because the San Diego school district is closed until April 6. The boy wondered what was wrong. The father’s answer: “The media has scared people, so they want to get stuff to feel safe.”

Another shopper used a string of expletives, directed at the American press, for the hectic crush at the grocery store today. However, on the whole, people were calm, polite, and helpful. I recall a similar sense of camaraderie in the aftermath of 9-11.

I endeavored to keep to my usual list, as I didn’t want to “panic purchase.” However, I did add a few extra non-perishables into my cart in the hope I could avoid going next Friday. Here is what the pasta aisle looked like: 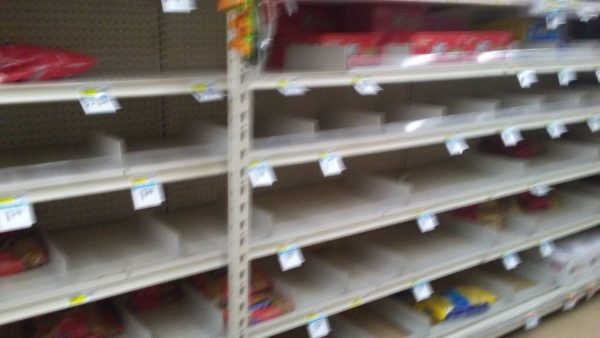 The only boxes left were the gluten-free items. Frankly, I would rather starve. As I reached for the last box of standard spaghetti, I overheard one man tell his wife that he blamed the CDC for this drama. His words, “If they weren’t so focused on lifestyle choices, they would have been more prepared to deal with the viruses that were suppose to be their mission in the first place.”

I was a bit worried about the toilet-paper situation at home, as we were down to our last rolls. Fortunately, a friend of mine had gotten extra at Target, after driving to Costco and seeing the line wrap around the building.

I traded her for AAA batteries, as I had bought extra last week. It is good to see the ancient ways of bartering can still work!

I caught some of the press conference Friday. I would argue that the most important portion of the conference was the public-private partnership that the Trump team had arranged to address various issues that have become a concern (e.g., testing, supply shortages).

The president ushered a lineup of “the biggest business people, the greatest retailers anywhere in the world,” Trump said on Friday, to address the spread of coronavirus—which has now become an official national emergency.

Walgreens, Walmart, Target, Becton Dickinson, Roche Diagnostics, Quest Diagnostics, CVS, LHC Group, and LabCorp all saw their stocks shoot up shortly before market close after their respective executives spoke alongside Trump during a White House press conference on Friday, addressing new measures to stem the spread of coronavirus in the U.S.

Walmart’s stock popped nearly 5% before market close, as CEO Doug McMillon addressed plans to keep parts of Walmart parking lots open per a request from the White House—giving Americans better access to its drive-through testing experience. Walgreens’ president Richard Ashworth also announced the company would continue to partner with the administration and the CDC—its stock popped 5%.

Other CEOs like Target’s Brian Cornell assured Americans the retailer would continue keeping stores open amid consumer efforts to stock up on household goods, and Becton Dickinson’s Tom Polen announced the medical device maker was “ramping up [its] manufacturing capacity” to ensure ample testing equipment was available. Quest Diagnostic’s Steve Rusckowski said the company has been working with the FDA and CDC and is “up and running” with tests in its facilities, while Roche’s Matt Sause said the company has partnered with laboratories to get a new coronavirus test approved and soon distributed.

My second-favorite president Calvin Coolidge once said, “After all, the chief business of the American people is business.” By stripping away needless regulations, by allowing innovation, and by treating companies as partners instead of punching-bags and piggy banks, Trump has created a critical alliance in the battle against the Wuhan Coronavirus pandemic.

It is clear from Wall Street’s reaction, as well as my husband’s (who raved about what a great press conference this was), people are happy with the president’s approach.

Hopefully, the media-caused apocalypse will soon be over.

How the Liberal Media Earned Their ‘Enemy of the People’ Title Today at Trump’s Wuhan Virus Presser
https://townhall.com/tipsheet/mattvespa/2020/03/13/point-and-laugh-why-this-nyt-reporter-had-to-quickly-delete-his-tweet-about-the-dow-jones-n2564928

The media doesn’t answer to America anymore, their handlers are the globalists… they will not cease

don’t come to florida when the hurricane watches are posted. very similar situations, it is a run on food, plywood and gasoline

Maybe average people should plan ahead, should conduct their personal business based on a longer term outlook rather than paycheck to paycheck.

And batteries and bottled water.

Why in the world bottled water??

I mean in the present situation, not a hurricane. Water will be the last thing to fail us, but people are grabbing all they can.

Storm season is approaching – tornado season and then hurricanes. It is very possible that electricity can go out, flooding occurs, and water systems can be damaged. Having a supply of water is a good thing.

None of which are likely in Central New York – ice storm season is (I hope) over. Yet, bottled water is selling like hotcakes. If worse comes to worse, I can drop a bucket in my well. But I prefer having a generator to run my pump.

Maybe the media, Hollywood and the Democrats are right. So maybe the 2020 Presidential election should be delayed until 2028 so President Trump can turn this corona virus thing around.

The comment about the CDC is spot on. They’ve been so worried about Liberal causes (gun control, tobacco control, food control) that they didn’t pay enough attention to doing actual medicine.

Time to changes that. If reelected Trump should give walking orders to the globalist crowd and replace them with people interested in medicine and not propaganda.

As I have said before, I buy almost everything one year supply, purchased at the lowest price. I have been doing this for over 40 years. I realize about a 35% return on investment by doing this.

I also have peace of mind knowing that I can weather most disruptions, while saving a lot of money.

I look at the worst case scenario, hope that it not that bad, but am prepared if it is.

I expect this disruption to last 3-6 months.I could ride out double that with little discomfort.

I find it entertaining that some people are totally dismissive of the ramifications, others go ape shit crazy, both have the wrong outlook. Be prepared for the worst and happy when it turns out better than it might have been.

Trump should announce and implement a Marshall-Plan-like initiative to reclaim our industrial and manufacturing capacities from the Chinese, Indians etc. Just from the rebuilding of the facilities and related assets alone we would see the biggest American economic boom ever.

Per Wiki (I know, not the best source)…

“The Marshall Plan required a reduction of interstate barriers, a dropping of many regulations, and encouraged an increase in productivity, as well as the adoption of modern business procedures.”

I don’t see a need to fund the construction, aside from the current tax rules. But, just easing the regs and speeding up the approval process for the drugs will be great.

The only “partnership” we need is for the government to get out of the way. Do you know that the only reason there’s a hand sanitizer shortage is because the FDA classifies it as an OTC drug and won’t let anybody but Purell to sell it without a ten year approval process?

It is rather easy to make hand sanitizer.

“The media has scared people, so they want to get stuff to feel safe.”

Hmmm. I never thought of toilet paper as a safety issue before.

Rome reached a pretty high level of civilization without any TP. Of course they thought of alternatives; if they couldn’t solve a problem they’d hire some Greeks to do it for them. Good managers, those Romans.

Hopefully, the media-caused apocalypse will soon be over.

They’re pros. They’ll turn on a dime to fluff up some other pseudo-crisis.

…and then the government will make the company give it away for free.

I learned a lesson when I went to Sams and Wal-Mart today. Before leaving home, go to the bathroom first.
.

On Tuesday, everything was normal in my state and my small town. Wednesday, we got our first confirmed cases. By Friday, everyone had lost their damned minds and had overrun the stores. We have 13 confirmed cases from people who traveled out of state or their family members and everyone is acting like this is the zombie apocalypse. Stores are closing early so they can restock overnight and I’m going to have to go shopping for the week at 7 AM.

People should be prepared. Have we not learned lessons from 9/11, Katrina Fukushima? People should have food and supplies for a minimum of two weeks after the normal one to two week shopping cycle. Like saving money, having an emergency fund. The typical grocery supply chain covers three days.
When this event passes, keep your shelves stocked, so the next one doesn’t catch you unprepared. Have fire extinguishers, flashlights, batteries, water (min 2 liters per person per day), long shelf food (20-35 years), canned and frozen food lasts six months to two years. Yes, you also need toilet paper. Try Amazon subscribe and save, you can get 36 roll cases sent on a regular basis. Going back to food, 1500 calories per person per day. Try MyPatriotSupply, you can store around 25,000 calories of freeze dried food in a 5 gallon food grade bucket with a gamma lid. If you don’t have lots of extra money, it takes a little time to get prepared. However, when you are, you only need to top off supplies when you have advanced warning like we have had with the Wuhan virus, and when the zombie apocalypse hits, you can get buy for a few weeks until things settle. We’ll get through this, Hopefully some of us will learn from it.

This is most definitely media induced, but based on my experiences, it’s hardly a panic.

Everyone I’ve talked to seems to think everyone else is panicking, so they’d better stock up on things before all the panickers buy everything up and the stores run out.

It’s become a self-fulfilling prophecy. Everyone thinks everyone else is panicking (because the media has told them so) and the reaction to that is to beat the rush and stock up.

Maybe there is legitimate panic in other places, but not where I live. All I see are a bunch of people who are disgusted with the media (even the liberals who generally treat everything they hear from the MSM as gospel) but are resigned to dealing with this for a while.

Sorry for the redundancy. I was having a hard time putting my thoughts into words and as a result, I repeated myself several times. Should have edited more before posting.