The Senate passed the bill on Monday. The House will vote on it on Friday. 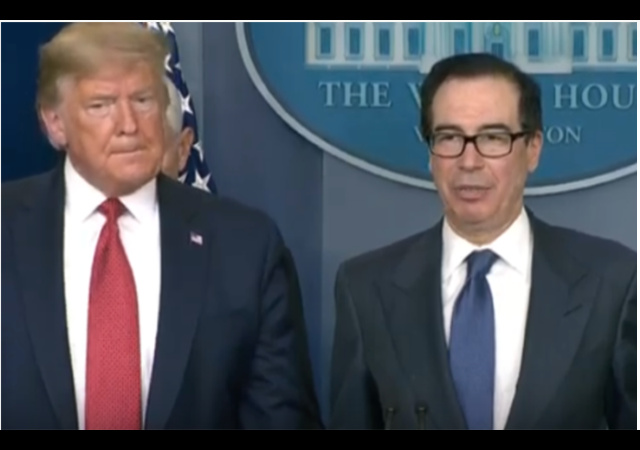 Today’s Coronavirus Task Force meeting focused on the coronavirus stimulus package. The Senate passed the $2 trillion bill Wednesday evening. The House will vote on it on Friday morning.

“I encourage the House to pass this vital legislation and send the bill to my desk for signature without delay. I will sign it immediately,” Trump said at a White House press briefing Wednesday evening.

The package includes the following:

Secretary of the Treasury Steve Mnuchin appeared at this briefing. He projects the Senate stimulus package will keep the economy afloat for about three months.

Mnuchin told reporters at the Coronavirus Task Force briefing Wednesday that small business retention loans would cover roughly 50% of private payroll, making loans that would supply eight weeks of salaries, as long as they keep workers employed, and overhead. The loans would be forgiven at the end of the eight-week period if the businesses keep their employees.

President Trump said he will sign the bill “immediately” after it reaches his desk. But it’s not yet completely clear when those payments to Americans will reach their wallets. Mnuchin said that in next three weeks direct payments would make it into most Americans’ bank accounts if they have direct deposit. For the rest, the checks will be mailed.

Of course, the press was eager to get in some “gotcha” questions after the main briefing concluded.

The questioning was so tasteless that even Coronavirus Task Force member Dr. Antony Fauci became annoyed.

Anthony Fauci bitch slaps reporter.
Reporter: “what do you think about the reports praising China for its leadership and response on the pandemic?
Dr. Fauci: “I don’t even know what your question is.”
Trump to Fauci: “welcome to the team”
pic.twitter.com/LgzP7LlSB6

Perhaps the most exciting part of the briefing today came when Dr. Deborah Birx asserted that some of the scientific models for coronavirus infections and deaths were alarmist and needlessly frightening the American people. She indicated that the worst-case scenarios assume no controls or containment efforts, whereas people are distancing and following other precautions.

“That is nowhere close to the numbers you see people putting out there. I think it has frightened the American people.” pic.twitter.com/nZdM5fSpeW

When the dust settles, the Chinese government’s role in creating the pandemic will be put under a microscope.

Five Las Vegas businesses have filed a federal lawsuit through an attorney seeking class-action status for 32 million small businesses to collect what he says could be trillions of dollars in damages from the Chinese government for lost income and profits due to the coronavirus outbreak.

Attorney Robert Eglet alleges China was reckless, negligent and covered up information about the respiratory illness instead of sharing information that might have prevented its spread.

Chinese Embassy officials in the U.S. didn’t immediately respond to requests for comment. Before the lawsuit was filed in U.S. District Court in Las Vegas, a China foreign ministry spokesman said people should stop making “wrongful remarks that stigmatize China.”

US sailors on aircraft carrier test positive for coronavirus at sea

Given how readily the contagion spreads on cruise ships, I hope the sailors recover quickly, and the decontamination is successful. A typical carrier can have 5000 crew members.

Three US sailors aboard an aircraft carrier stationed in the Philippine Sea tested positive for coronavirus and were flown from the ship, according to a report.

Acting Navy Secretary Thomas Modly told reporters at the Pentagon on Tuesday that the sailors, who were aboard the USS Theodore Roosevelt, are the Navy’s first confirmed cases among personnel at sea, Stars and Stripes reports.

The sailors were flown to a military hospital in the Pacific region, Adm. Michael Gidlay, chief of naval operations, told Stars and Stripes.

Dr. Birx isn’t the only one concerned about the doom-based models.

Oxford research suggests the pandemic is in a later stage than previously thought and estimates the virus has already infected at least millions of people worldwide. In the United Kingdom, which the study focuses on, half the population would have already been infected. If accurate, that would mean transmission began around mid-January and the vast majority of cases presented mild or no symptoms.

The head of the study, professor Sunetra Gupta, an Oxford theoretical epidemiologist, said she still supports the U.K.’s decision to shut down the country to suppress the virus even if her research winds up being proven correct. But she also doesn’t appear to be a big fan of the work done by the Imperial College team. “I am surprised that there has been such unqualified acceptance of the Imperial model,” she said.

If her work is accurate, that would likely mean a large swath of the population has built up resistance to the virus.

The hackneyed “elephant in the room” – chloroquin. It could change everything, but it is treated as an afterthought.

notamemberofanyorganizedpolicital in reply to Connivin Caniff. | March 27, 2020 at 8:35 pm

True Confessions: I have a Geek Crush on Mnunchin. The man is pure financial policy genius.

My wife was sick for nearly two weeks in mid-Feb. Headache, cough, fever as symptoms. Kids were home with her and I was out of town for a week of it. I got a sniffle a couple days after getting home, then we were all better. Makes me wonder if that was the Chinese Wuhan Coronavirus.

Bucky, I had similar symptoms in January and in fact the thing that stood out was that it was like nothing else I had ever experienced in my entire life!!

In fact after talking with friends last week quite a few of them had also experienced similar illnesses earlier in the year.

So yes, I think this has already been through our local community already.

notamemberofanyorganizedpolicital in reply to mailman. | March 27, 2020 at 8:37 pm

Mailman and Buckeye, I could believe it.

Don’t we get the most foreign college students from
Mainland China?