Sanders and his wife will “begin holding conversations with supporters to get input and assess the path forward for our campaign.” 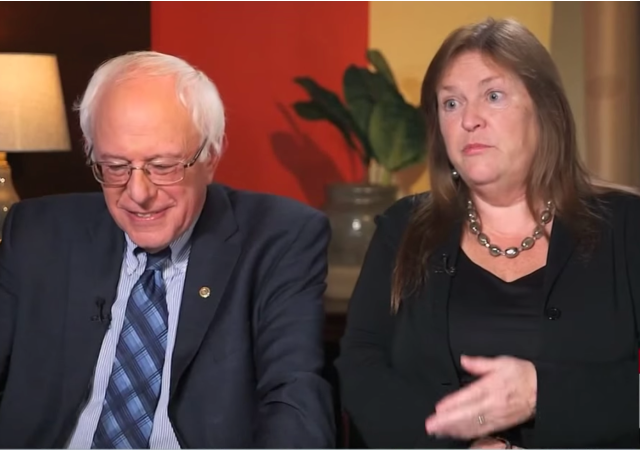 Reports say that Sanders will reassess his campaign, but not suspend it. He has suspending Facebook advertisements.

“The next primary contest is at least three weeks away. Sen. Sanders is going to be having conversations with supporters to assess his campaign,” Sanders campaign manager Faiz Shakir said in a statement Wednesday morning.

“In the immediate term, however, he is focused on the government response to the coronavirus outbreak and ensuring that we take care of working people and the most vulnerable,” Shakir added.

In a subsequent email to supporters, Shakir said: “No sugarcoating it, last night did not go the way we wanted.”

The campaign manager said that after the expected Senate vote on coronavirus relief later Wednesday, “Bernie and Jane are going to get on a plane back to Vermont. Once there, they’ll begin holding conversations with supporters to get input and assess the path forward for our campaign. We will keep you updated as those conversations progress.”

Sanders never made a statement after Biden swept the three states on Tuesday. Biden won so fast that the media called the states for him right after the polls closed.

Biden reached out to Sanders’ supporters in his speech Tuesday night. Who knows if it will work. One poll showed that a lot of those supporters do not know if they will support the Democratic nominee if it is not Sanders.

One Bloomberg advisor went all extreme, claiming that “voters will undeniably die if he [Sanders] doesn’t do the human thing and drop out now.”

“At this point it’s not wise to encourage people to head to the polls,” Yang said on CNN on Wednesday morning.

“This race is essentially frozen where it is. Everyone can see where it’s heading and I certainly don’t think Bernie and his supporters want to endanger anyone, but that’s the situation we’re in,” he said.

Axios mentioned that a candidate suspending Facebook ads has become a sign of them dropping out of the race. Mike Bloomberg and Pete Buttigieg both did this right before they dropped out.

Something tells me Sanders will not drop out.

Sanders may not have to because it’s doubtful he will catch up to Biden in terms of delegates.

Biden has 1,165 delegates while Sanders has 880. A candidate needs 1,991 delegates to secure the Democratic presidential nomination.

New York has 274 pledged delegates, which is the most out of the remaining states. That primary takes place on April 28.

He will siphon off as much cash as he can and demand another house from the DNC. A true Socialist

The campaign is suspended, but the money-grubbing & grabbing by family members will continue unabated.

Or, as he says to his snobby rich supporters, “Avast, ye haughtiest!”

I thought that was John Goodman sitting with Bernie!

Unattractive, greedy, and incompetent. Ask Burlington College which through her incompetence no longer exists.

No wonder she wants to be charge and on top of a political system that steals from the productive to give to the worthless.

notamemberofanyorganizedpolicital in reply to inspectorudy. | March 19, 2020 at 4:29 pm

I thought it was Bernie’s Husband.

So, it’s Trump vs the Alzheimer’s Man.

I knew Bernie didn’t really want it or had already been bought off when he acted so cordially toward Biden in the last debate.

If Bernie really wanted to win he would have gone after Biden aggressively and called him a liar or brought up any number of Biden’s relatives making big $$ off of the Biden name, particularly Hunter. As we have seen numerous times this likely would have set Biden off into one of his macho swearing and threatening tirades as he did with the autoworker in MI.

Scary times here beyond the Chinese virus as the current environment will allow the Dems to hide Biden, perhaps all the way to the general election and we could very likely end up with a senile old man as president.

By then, I’ll have probably completely lost my entire savings … but I know Trump is our only way forward

I knew they would through the book at him but I didn’t realize they were willing to kill everyone along with him.

I wonder how many of the media, politicians and billionaires made similar moves before the day they tried to destroy America?

notamemberofanyorganizedpolicital in reply to gonzotx. | March 19, 2020 at 4:33 pm

You know they knew about it and planned to profit.

I had a friend who was on the big board – the NYC stock exchange – options trader.

He made no qualms about how they “manipulated” stocks to their advantage and profit.

Their evil actions to kill people, let alone economies, doesn’t surprise me. Read this book – it’s not for the faint of heart.

Confessions of a D.C. Madam: The Politics of Sex, Lies, and Blackmail

Nasty, old, angry Marxist! Only the second descriptor is non-redundant.

If the democrat party was the Titanic, now is the moment when all the bernie bros have gathered in the a$$ end of the ship as it cracks off. tom perez is the Captain at the helm as the front end slices through the icy Atlantic water into the abyss. joe biden, citing his days as a lifeguard, displaces a steerage passenger and gets a seat on one of the lifeboats.

Joe Biden displaces more than just one steerage passenger. He wants to be able to lie down in the lifeboat, so he grabs a whole row.

What a shame!
I’m crying so hard, I might have to use up part of my hoard of TP.

So it’s the Biden/Hillary ticket, then.

The delivery date of the promised Gulfstream G3 has now been delayed. He’s not getting out till its delivered.

I don’t think the Democrat party wants HRC anymore than the rest of us do. I’d also point out that Obama still hasn’t endorsed his good buddy, Joe either.

notamemberofanyorganizedpolicital in reply to floridaman. | March 19, 2020 at 4:36 pm

Word on the street is the DNC will bring a dark horse.

The Friendly Grizzly in reply to notamemberofanyorganizedpolicital. | March 19, 2020 at 8:55 pm

Never forget what a corrupt POS this guy and his wife are:

Of course she was ‘cleared’ by the. The FBI is more corrupt.

That’s why he won’t drop just yet, there are still millions to be skimmed off all the ad buys by the shell ad broker company set up for his wife. Bernie has 3 house because he is worth millions despite the fact that he has never had a real job in his life.

Goodbye, Boynie,
Yes, goodbye, Boynie.
It’s so nice to see you get right outta here.
Fly of to NorK Boynie,
There’s no pork, Boynie,
‘Cause it’s cool to stand in line all day for bread!
…

I guess they are trying to decide what type of 4th home to get, perhaps something in the Caymans or the Bahamas? Also, Jane can’t be left out since she will no longer be Bernie’s media buyer, at a 15% commission rate. Maybe they can make her a college president again where she can enrich herself and bankrupt the college again.

In a subsequent email to supporters, Shakir said: “No sugarcoating it, last night did not go the way we wanted was a disaster to our campaign.”

There. Now it’s not sugarcoated.

The Burnmeister is assessing the pay-off amounts so he can purchase his newest matcha in Vermont.

Fuzzy, It always was ego. It takes an enormous ego to run for President, no matter if it’s Biden, Bernie, or The Donald.

Good lord she looks like a female version of Meatloaf.