Is Obama endorsing Biden behind the scenes so he can play uniter on the surface? 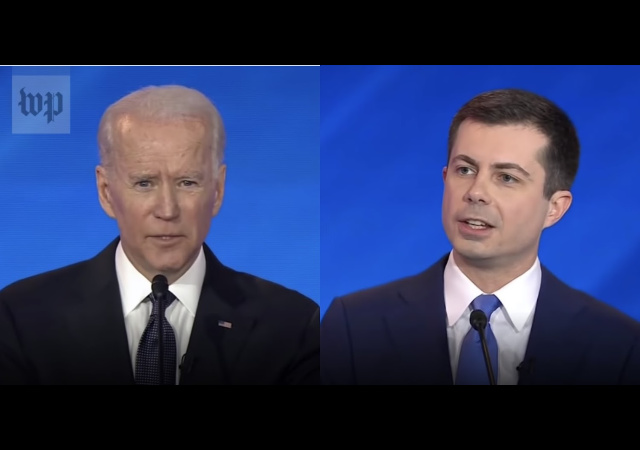 President Barack Obama has said over and over that he will not endorse a candidate in the 2020 Democratic primary.

But is he supporting his Vice President Joe Biden behind the scenes? Former South Bend Mayor Pete Buttigieg is supposedly mulling an endorsement of Biden after he spoke to both men after he dropped out of the race on Sunday.

Now reports say Buttigieg, along with Sen. Amy Klobuchar (D-MN), will endorse Biden Monday night at a rally in Dallas.

Buttigieg dropped out on Sunday, a day after the South Carolina primary. He won Iowa but did not gain more ground in the following states.

Buttigieg spoke on the phone with Biden and Obama, but not at the same time.

The New York Times reported the phone calls, but buried it within the article (emphasis mine):

Mr. Buttigieg talked with Mr. Biden and former President Barack Obama on Sunday night, according to a Democratic official familiar with the conversations. Mr. Biden asked for Mr. Buttigieg’s support and the former mayor indicated he would consider the request. Mr. Buttigieg wants to sleep on the decision, he told aides, some of whom believe he should move quickly to endorse Mr. Biden.

Mr. Obama did not specifically encourage Mr. Buttigieg to endorse Mr. Biden, said the official, who insisted on anonymity to discuss private conversations. But Mr. Obama did note that Mr. Buttigieg has considerable leverage at the moment and should think about how best to use it. Should Mr. Buttigieg endorse Mr. Biden on Monday, it could reshape the Democratic primary if many of his supporters shift to Mr. Biden, creating a more formidable centrist challenge to Mr. Sanders’s progressive movement.

It may have worked because Buttigieg centered his concession speech around Sen. Bernie Sanders (I-VT) (emphasis mine):

In his remarks, Mr. Buttigieg directed criticism toward Mr. Sanders, without naming him, that he has previously made on the debate stage and on the campaign trail.

“We need leadership to heal a divided nation, not drive us further apart,” he said. “We need a broad based agenda to truly deliver for the American people, not one that gets lost in ideology. We need an approach strong enough not only to win the White House, but hold the House, win the Senate and send Mitch McConnell into retirement.”

CNN reported that Buttigieg will attend a rally in Dallas, TX, Monday night to endorse Biden.

The self-avowed socialist has taken the lead in delegates and polling over Biden, which has caused fear and panic within the Democratic Party.

The New York Times reported last Thursday that desperation has taken over Democratic Party officials, including 93 superdelegates, in order to stop Sanders:

“We’re way, way, way past the day where party leaders can determine an outcome here, but I think there’s a vibrant conversation about whether there is anything that can be done,” said Jim Himes, a Connecticut congressman and superdelegate, who believe the nominee should have a majority of delegates.

Jay Jacobs, the New York State Democratic Party chairman and a superdelegate, echoing many others interviewed, said that superdelegates should choose a nominee they believed had the best chance of defeating Mr. Trump if no candidate wins a majority of delegates during the primaries. Mr. Sanders argued that he should become the nominee at the convention with a plurality of delegates, to reflect the will of voters, and that denying him the nomination would enrage his supporters and split the party for years to come.

“Bernie wants to redefine the rules and just say he just needs a plurality,” Mr. Jacobs said. “I don’t think we buy that. I don’t think the mainstream of the Democratic Party buys that. If he doesn’t have a majority, it stands to reason that he may not become the nominee.”

Paul in reply to notamemberofanyorganizedpolicital. | March 2, 2020 at 4:23 pm

notamemberofanyorganizedpolicital in reply to Paul. | March 2, 2020 at 6:49 pm

She’s on the cover of the “White House” Guide to Transgender issues,
and is hold a “book tour” (sure, sure) for a book that came out about 6 months ago……

Rush is reporting that Obama is making the calls.

Is tomorrow “Troll a Democrat Day?”

Hat tip to Ace of Spades.

It’s blatantly obvious that they the Dems are trying to save Obama for the general election.

Yeah, sure thing, b/c he’s helped so many.

“The Democratic Party suffered huge losses at every level during Obama’s West Wing tenure. The grand total: a net loss of 1,042 state and federal Democratic posts, including congressional and state legislative seats, governorships and the presidency.”

This can’t be true because all of the wall to wall Bloomberg ads we see 4-6 times/ hour in Florida say that Obama has endorsed Bloomberg. S/O

So….what was the name of the horse whose head Buttigieg awakened to find in his bed?

Plugs may not know what’s meant when Butt Boy says he’ll stand behind him.

Butthead got the booty-call from barry.

Let’s not forget how despised barry is.

notamemberofanyorganizedpolicital in reply to TheFineReport.com. | March 2, 2020 at 6:52 pm

Plus Barrack’s got the Reverse Midas Touch.

I think Bernie’s argument is reasonable. Id he goes to the convention with 40 percent, he could ask for 40 percent of the superdelegates. And that might put him over the top. It may not be convincing, but it’s reasonable.

Why should he get any of the superdelegates? They have their own opinions; why shouldn’t they vote on them?

“Hey, is this Pete?…”
“yeaaaah”
“hi, its Barry Obam… I mean Barack… Barack here…”
“um, hi!”
“2 things, 1, can you stop stealing my speeches and 2, um, the company says you need to back Biden… we can’t have the public knowing we’ve gone full communist… I’m sure you understand… oh, and we have the standard $$ and houses for you in compensation… ”
“um…ok, if you say so…”
“cool, hold the line for my secretary Michelle, she’ll hook you up with the cash my man…”
“sweeeeet”
“bye now”
“k buh bye…”

democrats are often (always?) guilty of what they accuse Republicans of doing. This has me thinking… PDJT was asked in a debate with hillary if she won, would he accept the results. I believe this was an indication that the democrats either subconsciously or consciously knew they themselves would never accept a PDJT win. The realization that PDJT will, in all likelihood, be re-elected in 2020 means the democrats want as much dissent, division, chaos and even violence injected into 2020. The democrats will blame PDJT for all of this while simultaneously claiming he is illegitimate, therefore must be “ignored.” pelosi has already telegraphed this strategy with her ‘We must not allow Trump a second term.’ They are going to lose anyway, so they are planning a scorched earth campaign. Rigging against bernie is lighting the fuse on this powder keg.

How many 2016 Republicans endorsed Kasich when they dropped out?

So last night it occurred to me that this whole election fiasco for them started the day that Occasionally Conscious camped out in Pelosi’s office and suffered no consequences. It was a direct provocation with no consequences, that served as a sign that either Pelosi was now politically weak or no longer had the will to defend her position. My guess is that pelosi was thinking the NGD twits would quickly burn themselves out as media darlings. But the lack of opposition just emboldened them instead. Now the old school dems have realized just how deep of a pile they are in and that people are bailing on them right and left. Even their supporters in the media are at risk, read Matthews. Milwaukee is going to make Chicago 68 look like cocktail hour.

The kids have to mov to the back seat