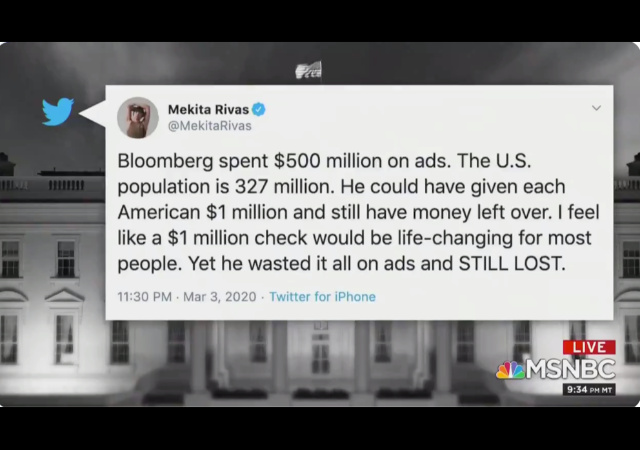 Mekita Rivers, a writer at Glamour and The Washington Post, posted that Michael Bloomberg could have used the $500 million he spent on ads on the American people. She said he could have given everyone $1 million and have money to spare. 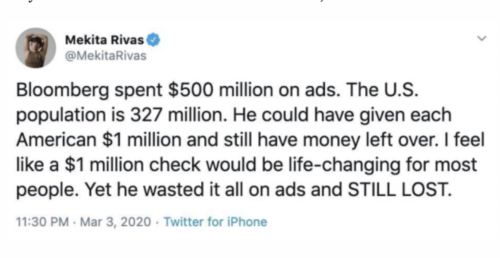 I guess you’d become a millionaire if Bloomberg gave you $1.53!

You’ll laugh at this. Rivas admits in her protected Twitter profile that she’s bad at math. 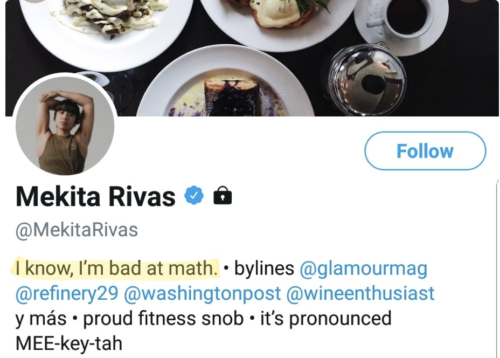 To make matters worse, Gay and Williams never caught the bad math. You know the producers and editors of the show saw the tweet, but no one said anything.

Thing is, it doesn’t take a genius to figure out that Rivers’ math was way off!

See if you can spot the math error. ?‍♂️ pic.twitter.com/V3b7pRqYUe

“You see it as a possibility, if he wants to spend a billion bucks beating this guy, he could do it?” Williams asked Gay in a discussion of Bloomberg’s primary ad spending and the billionaire’s promise to continue his political ad campaign through November to defeat President Donald Trump.

“Absolutely. Somebody tweeted recently that actually with the money he’s spent, he could have given every American a million dollars,” Gay said, as Rivas’ false claim appeared on screen.

“I’ve got it. Let’s put it on the screen,” Williams said, clearly not seeing the faulty math either. “When I read it tonight on social media, it kind of all became clear. Bloomberg spent $500 million on ads. U.S. Population, $327 million. Don’t tell us if you’re ahead of us on the math,” he added, not realizing that his viewers were ahead of him on the math, because he and his guest were botching it so badly.

“He could have given each American $1 million and have had lunch money left over. It’s an incredible way of putting it,” he added.

In fact, it’s an incredibly wrong way of putting it. But Gay certainly didn’t catch on.

“It’s an incredible way of putting it. It’s true,” Gay said incredibly, as, still, no one on the show stepped in to shut down this ongoing, embarrassing display of innumeracy. “It does suggest, you know, what we’re talking about here, which is there is too much money in politics. It makes it difficult because what we want in politics — the point is to have competition, and the point is to have the best candidates and have people from all backgrounds be able to run. So that gives people real choice, not just super PACS and dark money flooding elections or even just a single billionaire with good intentions.”

One way to get rich is to keep asking Brian Williams to give you two tens for a five. https://t.co/wOncG9FckQ

Is it any wonder we have a full movement of mathematical-illiterates who believe "the billionayas" can fund socialism?

Not even MSNBC and the NYT editorial board members can do basic arithmetic.

This little segment should serve as a reminder that Brian Williams is still doing the television.

At least people won't make fun of Brian Williams for pretending to be in a firefight anymore https://t.co/HSU7hUo1i7

Wow incredible math facts. This reminds me of the time when I won 75 dollars on a scratch off ticket so I gave everyone in my family 16 thousand dollars each.

how did this end up on tv? pic.twitter.com/xUYIOChhKv

Never forget that Brian Williams lied about getting a missile fired at him and kept his job https://t.co/Tk6y7lHC9D

I mean, it’s taxable income, some of it’s going to be lost.

It’s an inherited gift from a billionaire, so it is taxed at 90% plus a $10.00 processing fee. You now owe the government your bag lunch instead.

Yes, with that intuitive grasp of math, they must be Sanders supporters, for sure.

Personally, I’m holding out for a bribe from Hillary. Considering what she spent in 2016, I should get something close to $5.00.

Hillary’s idea of a bribe is, “Support me and you won’t have suicidal ideation.”

I suppose I should be amazed at the level of dumb but they’ve proven it so many times I’m numb to it now.

Maybe Sweetpea will have Barbie on for a hard hitting interview of the need to bring up our children’s math scores and what are their plans to bring this about.

Sort of puts their economic policies into context, doesn’t it?

Yes, completely feasible under their calculations!!

“All right, Brian, you’ve earned a raise so we’re going to increase your salary to $14.00 a week. Congratulations.”

And they both have college degrees.

Degrees which are apparently worth about $1.25 in the open market.

Overpriced even at that……..

And these people wake up every single day to go out there and tell us how much smarter than us they are, and they expect us to do, and say, and vote and live as they say, because you know, they’re so much smarter and stuff.
And it’s their job to do that.
And stuff.

“Stupid is as stupid does” — Forrest Gump

As this is a NYT editor, I would like to point out that if you consider the 1619 Project, the NYT is still better at math than it is history.

I and the NYT are still feeling that cut!!

It’s just a fool-the-eye thing, subtracting instead of dividing.

It’s more of an “eye of the fool” thing.

Sorry moon, fat fingers on a little phone, your thumb was supposed to be up.

All the billionaires in the US are only worth in the neighborhood of $3 trillion. If we confiscated every penny of their collective wealth, that would be less than $10,000 per person in the US, less than one year of current annual federal spending and less then 15% of the national debt.

Give the Dems time and the reins of government and Zimbabwe math will make that reference possible. The Dems can truthfully promise to make everyone in the USA not only a millionaire but a billionaire.

Well, if you subtract the 150 million who were killed by guns, the per person dollars go up.

And the two errors cancel each other out because they are of the same order of magnitude, so their libmath was correct all along, right?

I think I’m ready to go start a fight at Bernie rally.

Though, sometimes that last one moves into the order of magnitude defined as ‘REALLY BIG numbers’.

What did you expect from the ChopperWhopper?

This would only get one Pinocchio – mostly true if you use that alternative math. The same math that Leftists use when they calculate how much all their giveaways will cost.

charlie kirk does too and many conservatives pushing meme w/o checking the facts.
first, the commie said that was for people making 10 million or more but even IF the cutoff was 29K that would mean 2200 $ would be taxed at 52%. so tax on the 2200 would be approx 1144 $.
but people see a meme and just spread the fking thing w/o even looking.

and thats not taking into account we have that stupid progressive tax rate. if sanders ever released a plan that could be checked the numbers owed on that 2200 may even be less.
but again, its a meme and everything on da interwebs is true so gotta hurry up and repost it….

Clearly there is NOT ENOUGH money in politics, and wont be until candidates can pony up that $ 1,000,000.00 USD to each voter. If all candidates pay up equally the $$ will cancel and we can decide the election on its merits. 🙂

This says it all about our so-called education system….It’s no wonder we have to import talent to work in today’s commerce