I’m sure it was just an accident… 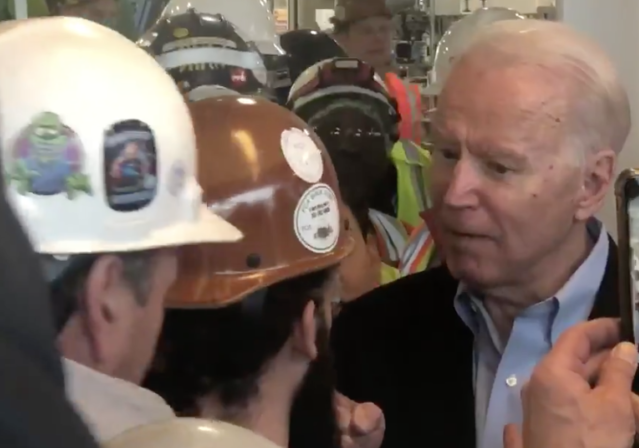 Tuesday, Biden got into a shouting match with an auto worker at a plant in Detroit. The worker confronted Biden about his gun confiscation rhetoric. It did not go well. Biden told the worker he was “full of shit,” shushed a female staffer, said he was going to slap the guy, pretended the second amendment was for hunting, and talked about AR-14s.

The full video is something else, which is probably why NBC left out all the best parts.

.@JamesOKeefeIII is always accused of "selectively editing" video when the non-story bits are cut, but when you leave the story on the cutting room floor, you are absolutely manipulating the story https://t.co/GtU5jBK2L5

The threat was omitted by all the broadcast networks (ABC, CBS, and NBC) and Univision, with CNNEE and Telemundo ignoring the incident altogether. But what NBC Nightly News did was particularly deceptive in that they completely cut around Biden’s threat of physical violence.

In the NBC coverage of the “tense confrontation,” correspondent Gabe Gutierrez actually noted that Biden did want to ban so-called “assault weapons” before boasting that the former Vice President “pulled no punches.” He then played the manipulated video:

AUTOWORKER (talking about Biden sticking a finger in his face): This is not okay. [Transition] You’re working for me, man.

BIDEN: I’m not working for you. Gimme a break, man. Don’t be such a horse’s ass.

The marked “transition” was where Biden can be heard in unedited video saying “Don’t tell me that, pal, or I’m going to go out and slap you in the face.” The whole confrontation can be watched here (or above, NBC’s report is below) with the edited portion starting at the 1:03-second mark. The edit was intentional because the comment only lasted less than four seconds (thus there was no time crunch), and NBC reporter Jonathan Allen noted the threat in an online report.

Both ABC’s World News Tonight and CBS Evening News didn’t dare get close to that portion of the video and downplayed Biden’s actions. CBS politics reporter Ed O’Keefe simply suggested: “Biden got testy when a man who asked why he wants to take away guns.”

Over on ABC, senior national correspondent Terry Moran reported that “along with the chants and cheers, an angry confrontation with one autoworker, who confronted Biden on guns.” Moran even included a sizable soundbite of Biden lying about his position on taking away guns.

WATCH: "You’re full of sh*t," @JoeBiden tells a man who accused him of "actively trying to end our Second Amendment right."

So it’s a MANIPULATED video? You might say FAKE NEWS

Just like the crap they pulled with George Zimmerman.

notamemberofanyorganizedpolicital in reply to JusticeDelivered. | March 11, 2020 at 9:34 pm

Time to Bury those FAKES with their own Crap.

Excellent Branco cartoon summing up the DNC Clown Show and the rest of this week.

I predict at some point down the road, there will be wide censorship and some kind of “social point” system like in the origination country of COVID-19.

In a few years, it’ll be like the MLK ‘I have a Dream’ speech – the selective broadcasts of which always seems to exclude the following passage:

“We must forever conduct our struggle on the high plane of dignity and discipline. We must not allow our creative protest to degenerate into physical violence. Again and again we must rise to
the majestic heights of meeting physical force with soul force. The marvelous new militancy which has engulfed the Negro community must not lead us to a distrust of all white people, for many of our white brothers, as evidenced by their presence here today, have come to realize that their destiny is tied up with our destiny. They have come to realize that their freedom is
inextricably bound to our freedom. We cannot walk alone.”

I hate the MSM. Their lying and manipulation knows no bounds.

actually biden is perfect candidate for dems: value destructive platforms and ideas being touted by a broken brain candidate. The dem ideological platform cancer is destroying its host joe.

… and they forget the parts that are …

No doubt some do have such venal motives, but many of them are zealous apparatchiks happy to do whatever they can to advance The Cause.

Joe has been mouthing off violence a lot lately. People who are in early stages of dementia typically exhibit more displays of anger and threaten violence against others from their frustrations over their diminishing cognitive issues.

Biden has always been a bully. People claim he is a nice person, well, yeah, they are the same people who claimed Herr Mueller was straight, even though there is plenty of evidence of his tactics to push his narrow views were not totally legal nor in the interests of justice.

The media seems they are more like fiction writers than those looking to expose the truth.

I am so disgusted with the left, the media, and the lies they keep pushing in their quest for power.

The cerebral cortex is inhibitory by nature. Many of our behaviors are hard-wired “go” responses in the lower brain areas, and the cortex is there to keep them in check. What Sleepy Joe might be exhibiting is a diminished cortical functioning such that the normal inhibitions are simply no longer present as functioning brain circuits, and thus he is more easily “triggered,” in this case, an appropriate use of the term. Or he just no longer cares.

I’m Shocked! Shocked, I tell you!

I think the guy is actually a construction worker not an auto worker.
Thought I read that the plant is being remodeled for EV’s. The hard hat might be for a skilled trades worker but it seems more of a construction thing going on by the looks of all the hard hats.

WTF? What difference does that make?

The worker is an autoworker and just made a great video with the NRA.https://www.weaselzippers.us/445448-union-worker-who-tussled-with-joe-biden-has-a-message-for-him-and-anyone-coming-for-the-ar-14s/ Watch it here.

Still hard to phathom, isn’t it?

Pat Caddell : The Media have become “Enemy of the American People”.

notamemberofanyorganizedpolicital in reply to Taxpayer. | March 11, 2020 at 9:37 pm

In 2012 93% of the media members where Democrats.
Even Chris Wallace on Fox News is a life-long DC Democrat!

Sure the percentage is even higher now, since that’s what happens in Cults!

I think that slow Joe’s problem is going to be like the coronavirus. The msm is going to try and contain it as much as they can but there is just too much exposure to other sources now. They will try their best to hide his gaffs but some are going to pop up that are so egregious and they will get aired and will look even worse because the left will not have been exposed to his daily mistakes. Think of the magnitude of their collusion! To put this sick man into the WH is a criminal act.

Yes, the guy is a construction worker. Auto workers typically wear small, lightweight bump caps. Construction hands wear the fiberglass hard hats with “outage” stickers on them. I’d sure like to see Biden “go outside” with an ironworker!

The MSM got their orders.
Biden is going to get the nomination, so protect him at alecosts.

I have news for the babbling Buffoon and his ilk, it’s all over the net and social mediator late.

What difference? Probably none. It is just this little thing called accuracy.

Wait for the explosions when he has to deal with Professional Hecklers.
Just from this one exchange I can see it being used as material for a Trump Advert as follows:
Voiceover of the key segment of the argument, unedited, just a sound byte clipped from the most confrontational portion.
Video of a Nuclear Explosion.
A similar commercial was run by the LBJ campaign, only it wasn’t a Goldwater voiceover but a child singing a rhyming song.
That one commercial was attributed to be a major contributor to Goldwater’s defeat.
Veritas Vincit

More proof of how thoroughly corrupt and dishonest the American media is. The trouble with tv from the start was to allow the networks to monopolize via their handpicked staffs news reporting. Under radio, any news commentator who could find a sponsor had access to the air waves

Because I missed the “slap…face” comment, I clicked on the “…can be watched here…” link. Guess what. The Twitter account has been suspended. Anyone who believes what big media publishes is a fool and grossly misinformed. That would be ABC, NBC, CBS, CNN, MSNBC, WaPo, NYT, SF Chron, Dallas Morning News, sometimes FOX and you know the rest. Believe them and you’re sorely indoctrinated.