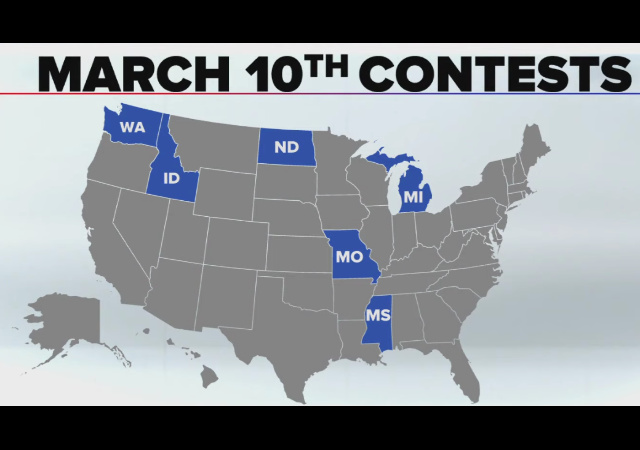 The Associated Press, Fox News, and CNN called the state for Biden. While Michigan said it may not have official results until Wednesday, Biden has a huge lead over Sen. Bernie Sanders (I-VT).

How did Biden win Michigan?

HOW DID BIDEN WIN MICHIGAN? He’s seen as best-equipped to defeat the president; won white voters with no college degrees; and labor union households, according to network exit polls. pic.twitter.com/nnqRNyyNOK

CNN also reported that groups in Michigan that supported Sanders in 2016 changed to Biden this year:

Around two-thirds or more of Biden’s core voter base, older voters, black voters, and moderates supported him in Michigan, as well as those who oppose a government-funded health program, voters whose top priority is race relations, and voters who prioritize beating President Trump over someone who agrees with them on policy.

Biden also performed much better than expected among groups Bernie Sanders won in 2016. The former vice president and the Vermont senator are currently neck and neck among men without a college degree, a group that Sanders won by 22 points in Michigan over Hillary Clinton in 2016.

It looks like Biden is starting to run away with Michigan:

Michigan Secretary of State Jocelyn Benson said that the state may not have a winner until Wednesday:

This is due to a constitutional amendment passed in 2018 that expanded access to voting – including not needing a reason to vote absentee and same-day voter registration.

“This means that across Michigan clerks and their teams will have significantly more work to do today than on previous election days, and that the results of today’s elections may not be known until well into Wednesday,” Benson said in an op-ed published Tuesday morning in USA Today.

Biden led in the latest poll over Sanders by 24 points. But in 2016, failed Democratic presidential Hillary Clinton also led Sanders.

Sanders ended up winning the state. Will it happen again?

“The US economic system needs…”

CNN and Fox News project that Biden will win Mississippi.

What a great start, CNN! Anyway, Biden is projected to win Mississippi.

IN MISSISSIPPI: Biden got a huge boost in Mississippi from African Americans voters who made up a majority of the electorate. Biden also won a majority of white voters. He was the top choice among voters who were looking for a candidate who can unite the country, exit polls show.

About 6 in 10 primary voters in Miss. would like to see the next president return to Obama’s policies; they went overwhelmingly for Biden. Biden (74%) widely seen among the majority Black electorate as candidate who best understands concerns of racial and ethnic minorities.

More of the Mississippi breakdown: pic.twitter.com/1ACgdU3POL

About 1/4 of Missouri Dem primary voters live in labor union households; 6 in 10 back Biden. Four years ago, Sanders won union households in Missouri. Biden widely seen as the candidate who has the best chance of beating Trump: 62% say Biden has the best shot, 32% say Sanders. pic.twitter.com/ZccskbyJ45

Michigan is an open primary. Just tell them which party you want to vote for and that’s the ballot you get.
So I went all in for bernie (PDJT faces no opposition). Hoping he can lose in a brokered convention in Wisconsin and his voters riot and loot.

I’m sure the people and businesses in the convention center area appreciate your wish.

“Women, labor, and households.”
What if you are a female union member, how is household defined?

Racial and ethnic minorities.
We ALL are of a race, and we are ALL of an ethnicity.
The division of/by identity will be the end of the Dem party.
I am white, female, of a German, Irish, English, and French descent, Christian, wife, mother, hetero, suburban, well-educated, and a homeschooler.
How would the Dem party identify me?
I am a Gordian knot of identities.

DNC just admitted publicly that Ol’ Joe is too Sick to Debate.

(But the stupid DNC is too un-self-aware to know that they confessed it!)

There is no doubt the DNC is apoplectic at the rapid and very visible decline of their leading candidate for president. …. no-one seriously thinks that Biden is making the decisions any longer…. party control agents …are scripting everything.

Either CNN is going to have a heavily manipulated debate with taped-delays, leaked questions and a framework of total control to protect Joe Biden…. or they’ll cancel it.

WHOLE WORLD LAUGHING AT THE DNC
AND BIDEN!

Jim Clyburn: Shut Down Primaries, Debates To Protect Biden From Saying Something He ‘Cannot Overcome’

How can a union person. It’s for Biden?

They won’t have a job if he would win

Obama polices, what exactly were those?

Where every cop and white person was guilty?

He stirred up racist hatred that still is rampant today.

I never felt uncomfortable around Blacks, went to school with them, daughter played D1 basketball and was a star so many of her friend are black and they and their families became my friends

But now, I am very uncomfortable around Blacks I do not know
I recently saw a black man misconstrue something a woman walking by him in a grocery store said and he wanted to actually hit her but the female with him stopped him.

Dang, I was ready to call 911 and support the woman, there appears no boundary’s anymore. It’s open season on white people

Yeah, I definitely do not want to go back to that crap

Great analysis of the briar patch the DNC put themselves into (from down under).

Race to 2020: The Democrats are heading for ‘civil war’ after Super Tuesday

Bernie has a limited window of support, Bloomberg flopping so bad was his ultimate downfall. He need a party divided more than just two ways and it didn’t happen for him.

Makes sense. The club kneecapped Bernie in Ohio with a prohibition of rallies. He can’t win Florida. Bernie had one card left to play…. The Debate Card. Not exposing Biden 3/15 was worth $$. Bernie is cashing out… https://twitter.com/donwinslow/status/1237546517893799937 …
Don Winslow New book BROKEN on sale APRIL 7
✔
@donwinslow

I’ve just been informed by someone who would DEFINITELY know that @BernieSanders will announce that he will suspend his campaign on Wednesday or Thursday.

Here in Wa, The machine went for Biden- it was obvious when Durkin declared for Biden (Durkin is Seattle mayor and ambulance chaser who defended Gregoire in stolen Governors election in 2004)

So it is stolen from Bernie here. Rest assured voter enthusiasm on the left will be low in November especially with the crap that Gov Inslee is pulling (forcing Sex ed on first graders and the car tab tax). He is NOT popular, even on the left now.

We did our best to make it close and contested.

“It doesn’t matter who votes, what matters is who counts the votes”!

I can see the DNC kneecapping Bernie, take him out to make it a sure thing for Biden, then they won’t have a Bernie Bros to contend with in the convention. Biden will end up being out because of health, so the DNC can put in the candidate they want, limiting exposure and opposition research time.

Biden is mentally failing, he is a place holder, as I see it.

He would be a worse choice for the DNC than the RNC gave with McLame.

I don’t think Bernie would have done well in a National election either, but the DNC saw the AOC wing was gaining in power, and they weren’t going to have that lingering issue. Taking out Bernie in fixed elections like these primaries is easier to do, and it diminishes the power of Squat, a two-fer for the DNC.

Biden is breaking down, far quicker than they hoped. Bernie is a crazy Marxist, but Biden is just plain crazy. Neither are acceptable to go nationwide with. Biden dropping out after taking out Bernie was the only way to salvage this mess for the DNC.

I’m wondering about Tulsi Gabbard in all this. Why is she still in the race? No money, no network, no support. It makes no sense to me unless she is part of the Dims plan all along. The DNC had to know months ago that ole Joe was losing it but they had no one else to run. He is the least unpleasant of the group of unpleasant candidates. It will be a miracle if ole Joe can make it physically to November, much less mentally. When they get to the convention and Joe has to fall out who will be left? Gabbard, a woman of color, as progressive as the rest, veteran and well-spoken. Biden gives her all his delegates and it’s all over.

So the voters voted NO on socialism?