“Got married! From partners in politics to life partners, so blessed. Alhamdulillah” 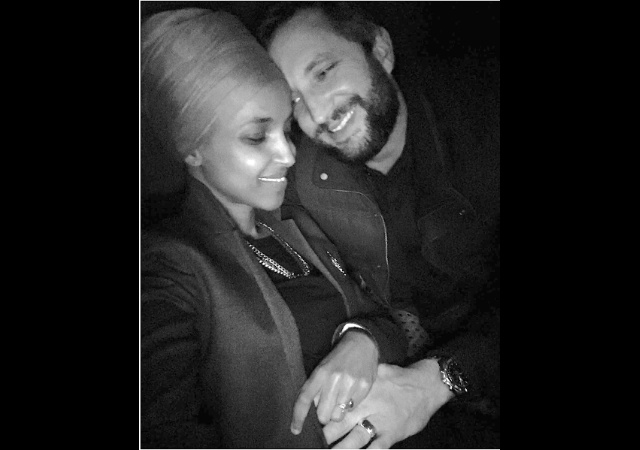 Rep. Ilhan Omar (D-MN) announced on Instagram that she got married. She didn’t say his name or tagged the photo. 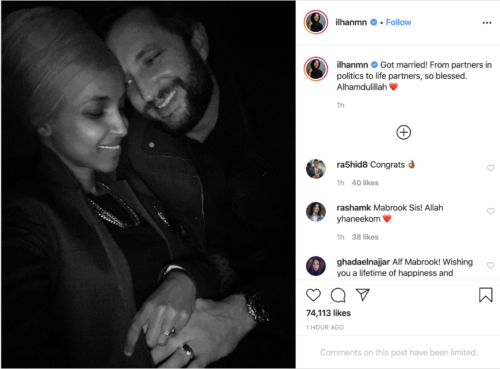 I got so confused because the man does not look like Tim Mynett.

I discussed with Kemberlee, who reminded me of the contrast setting on Instagram. Others confirmed it like KSTP:

On Wednesday, Rep. Ilhan Omar announced on her Instagram account she is married. The photo attached to the post shows her and political consultant Tim Mynett, who she has been romantically linked to.

Omar did not name her spouse in the social media post.

In her divorce filing, Mynett’s ex-wife alleged that he was having an affair with Omar. Omar refused to comment on those claims while Mynett denied them.

A spokesman for U.S. Rep. @IlhanMN confirms what my source told me: The man in the photo is indeed Timothy Mynett. Adds no further comment beyond her Instagram post.

ONE MORE THING: The spokesman tells me Omar and Mynett were also married Islamically.

Mynett’s wife claimed in the divorce papers that Omar wrecked the marriage:

The physician, 55, and her 38-year-old husband — who has worked for left-wing Democrats such as Omar and her Minnesota predecessor, Keith Ellison — have a 13-year-old son together.

“The parties physically separated on or about April 7, 2019, when Defendant told Plaintiff that he was romantically involved with and in love with another woman, Ilhan Omar,” the court papers say.

Beth Mynett told her husband that she still loved him and was “willing to fight for the marriage” even after his admission, according to the court papers. The pair had been living together for six years before marrying in 2012, the filing said.

But Tim Mynett told her he was through, the suit says.

At the beginning of August, DailyMailTV reported Omar “dining and holding hands with a mystery man at a secluded restaurant outside of Los Angeles back in March.”

A week later, The Daily Mail revealed the man as Mynett. A source told the publication that Omar “has been carrying on with Mynett, 38, a campaign fundraising strategist, for several months.” The journalists confirmed then that Mynett and his wife split up and he moved to a DC apartment.

Omar and Mynett have a relationship that goes back to 2018. She has paid him “and his E. Street Group approximately $230,000 through her campaign since 2018 for fundraising consulting, digital communications, internet advertising, and travel expenses.”

Is he her Brother also?

Anchor marriage for whom? They’re both US citizens.

Her alleged immigration fraud cannot affect her citizenship. She was already a citizen when (and if) she committed it. Her father’s fraud, if any, is not her responsibility. Nor would she be responsible for any misstatements she may have made in good faith on her naturalization application, based on what her father had told her.

However if Matthew Kolken’s assumption is correct that she got her citizenship automatically on her father’s naturalization, and it is then proven that that naturalization was invalid, then it would turn out that she, through no fault of her own, was never a citizen either. This is all supposition, though. If she applied for naturalization herself then her father’s fraud would be unlikely to affect it.

All based on hearsay, of course, but if she entered the US through perpetrating a fraud, that would certainly call into question her naturalization under a fraudulent identity.

As I understand it she came to the USA with her real father and some siblings, and a fake mother and her children, while her mother with the rest of the siblings went to the UK. I assume the fake mother’s real husband was dead, so she let Ilhan’s father play the role.

Lighten up Milhouse, it was a VERY obvious joke.

And miss the opportunity to be the answer to the question nobody asked???

Why is this picture in black and white? Is this a trend in wedding/engagement photos? Just curious.

Black and white photos look classy. Besides he looks less white that way, how his hair, which is blonde, became black is a puzzle I attribute to filters.

I can’t believe you used the word “classy” with respect to omar, but I accept your comment related to racial politics.

It must be devastating to be dumped for the likes of Omar. Does this mean Omar outsmarted him?

If he has children with his first wife, does he think they are infidels now?

One does not have to look very far to find Islamic hypocrites.

But did she divorce her other two husbands first?

“… until the end of love.” Congratulations!

Assuming she committed immigration fraud (which seems likely but has not yet been proven) she will be indicted if and when the FBI can prove it. But even if she is convicted she can never be deported because nobody is even alleging that her naturalization was obtained fraudulently.

Actually, there is fairly strong evidence that her naturalization was obtained fraudulently. See David Steinberg’s reporting on the issue or powerlineblog.org. The best defense of it is probably that since she was a minor when she came to the US, she might not have been aware of it and as a minor might not be held responsible.

To clarify, specifically because the immigration was fraudulent that made the naturalization also fraudulent.

Additionally, her and her father are not named Omar. They migrated to the US falsely under the name of the Omar which was the name of another family migrating here at the same time.

Reportedly, Ilhan Omar was naturalized under her father’s naturalization, but she was over 18 at the time

Reported by whom? Nobody’s reporting it, it’s just supposition, based entirely on the unverified reports that she was under 18 at the time.

That’s exactly what they are alleging.

Feds have a 95% success rate revoking naturalization for immigration frauds similar to hers.

And, yes, they do deport when they win those cases.

DOJ is engaged in so many of these that they just recently announced they are setting up a separate division just for this.

As usual, the Milhouse post above is complete disinformation. Just absolute garbage.

But Milhouse once got accepted into MENSA and owns lots of books. He can’t be wrong!

Oh, yes, that is exactly what is alleged.

I look forward to you telling me, who spent days in the federal building in Sandy Eggo (yes that’s sarcastic) filling out the paperwork to get the woman who was then my wife legally into this country.

Talk about a melting pot. I’m the racist? There I was with a bunch of Mexicans trying to legalize there presence and the immigration officials have an official policy of not telling anyone what documents you need to fill out.

And none of the documents are what any normal human being could discern is what they need. They are all written in government. So there we were, pawing through the documents, in the vain hope one of us would get something right. And if one of did, we would come back and tell the others.

I must have bonded with half the population of the states of Sinaloa and Chihuahua. I have invites to Quinceañeras from here to eternity. I won’t be able to live so long.

But I’m the racist.

Sympathetic note from a friend of gomarus here…

I also filled out the immigration paperwork for my spouse (but in Taiwan, while we were living there), and translated all the documents from Chinese. I work teaching mostly Central American and African kids English, and have been evaluated by numerous school administrators as having good rapport and strong abilities in getting along with diverse populations. Yet people near and dear to me accuse me of racism, too.

“But even if [Omar] is convicted [of immigration fraud] she can never be deported because nobody is even alleging that her naturalization was obtained fraudulently.” –Milhouse

But, Milhouse, if Omar entered the country fraudulently to begin with, then how could she legitimately become a naturalized US citizen?

Even if she’s convicted of immigration fraud, that has nothing to do with how she entered the country, so it could not possibly affect her citizenship.

Now if her entry to the country was also obtained by fraud, which is a completely separate allegation that may or may not prove to be true, she could of course not be charged with that because she did nothing wrong. The only question is whether it would affect her naturalization some 5-6 years later, for which we would need to know more about how that happened. If she applied for it herself, and made no knowing and material misrepresentations, then it seems to me that it would not be affected. If, on the other hand, she automatically became a citizen by virtue of her parents’ naturalization, and that turns out to have been obtained fraudulently, then it may turn out that she is not a citizen after all.

I feel sorry for her children and the father of her children. Technically, under Islam, I think Ilhan is supposed to be stoned for infidelity.

No, at least according to reports Hirsi had divorced her by then. Also, there are not four witnesses who saw her in flagrante delicto.

If he didn’t convert to Islam, then she will be in hot water. I wonder if the Muslims back home in Minnesota will stand behind her?

She’s only in hot water if the marriage doesn’t serve the political interests of Islam. If it does, then any rule may be violated.

Has the IL-Hand married Jim Acosta yet?

ANY TRIAL LAWYER KNOWS WHAT THIS IS ALL ABOUT–PRIVILEGE AGAINST TESTIMONY FROM SPOUSE. Look at MN law:

Marital partners (1) cannot testify against each other during their marriage, and (2) after the dissolution of a marriage, the ex-partners cannot testify against each other regarding interspousal communications made during the marriage.[7] The privilege does not extend to conduct not intended to communicate a message (non-assertive conduct),[8] nor to communications made prior to the marriage, or after the dissolution.[9] The privilege also does not apply in intra-familial disputes.[10] The privilege does not apply to a civil action or proceeding by one against the other, nor to a criminal action or proceeding for a crime committed by one against the other or against a child of either or against a child under the care of either spouse. Unless the non-testifying spouse objects and absent special circumstances failure to object to the spouse testifying is a waiver of the privilege.[11]

My first thought as well.

His converting was necessary in order to comply with Islam; it is forbidden for a Muslim female to marry a non-Muslim. A Muslim male may have non-Muslim wives, and all the non-Muslim female slaves he can acquire. The children of such non-Muslim women are considered born Muslim, and it is of course forbidden, once Muslim, to ever leave Islam.

It takes only a basic understanding of human reproduction, and of why females of our species are more biologically valuable than males, to see the strategy behind Islam’s restrictions.

Those family reunions will be really awkward with her ex being there.

She sure does get around.

If she had been acting like this in Somalia, she would have been dead a couple of marriages ago.

America’s great, and she’s an ingrate.

from my vantage point – it would take a pole much longer than 10 feet to consumate that marriage.

I don’t think there are any Poles involved. Though with these people one never knows.

Poor guy. Marrying a malignant narcissist is a horror.

Hey, nobody forced him. He abandoned his wife and children for her. He deserves whatever comes to him.