Using a mass-infection and -death event in your own country so you could issue a snarky tweet is not politics, that’s a bad person.

Hillary Clinton is a bitter woman, to put it mildly. Put aside her relationship problems.

Politically, Hillary saw herself as destined for the presidency. 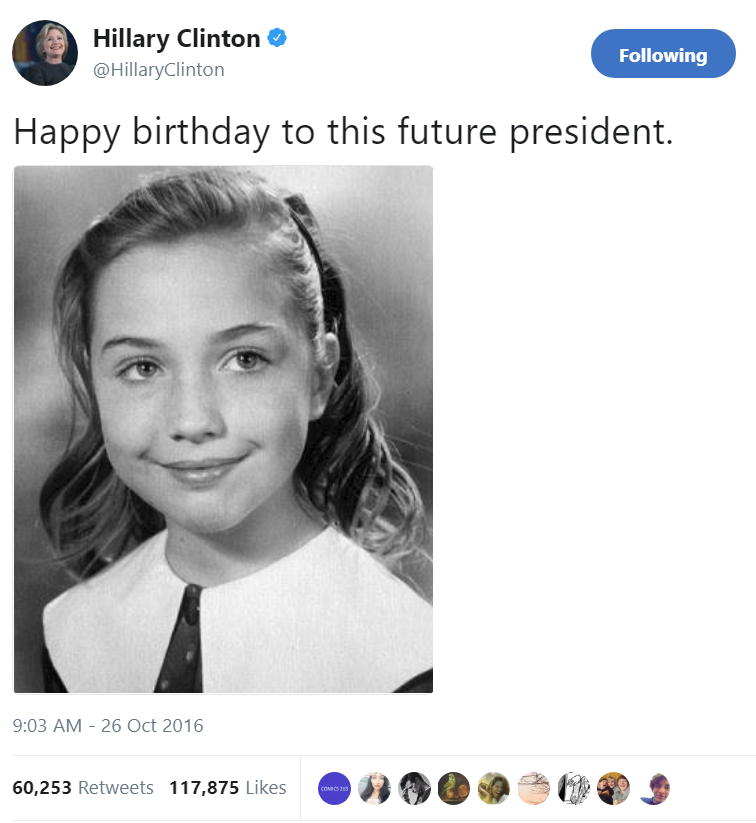 That life ambition came crashing down on election night 2016, when the deplorables somehow managed to elect Donald Trump. She couldn’t even bring herself to give a concession speech or appear in front of her forlorn supporters.

I have watched various versions of this video a gazillion times. I can’t get enough.

No matter what form of pestilence ravages the land, we’ll still have that night.

So we are not beneath mocking Hillary’s defeat. Or liberals. That’s politics.

Hillary, though, seeks to exploit the nation’s misfortune with the Wuhan coronavirus to try to dunk on Trump. Taking joy in a mass-infection and -death event in your own country so you could issue a snarky tweet is not politics, that’s a bad person.

Hillary tweeted, referencing an NY Times report that the U.S. has the highest number of confirmed coronavirus cases:

He did promise “America First.” 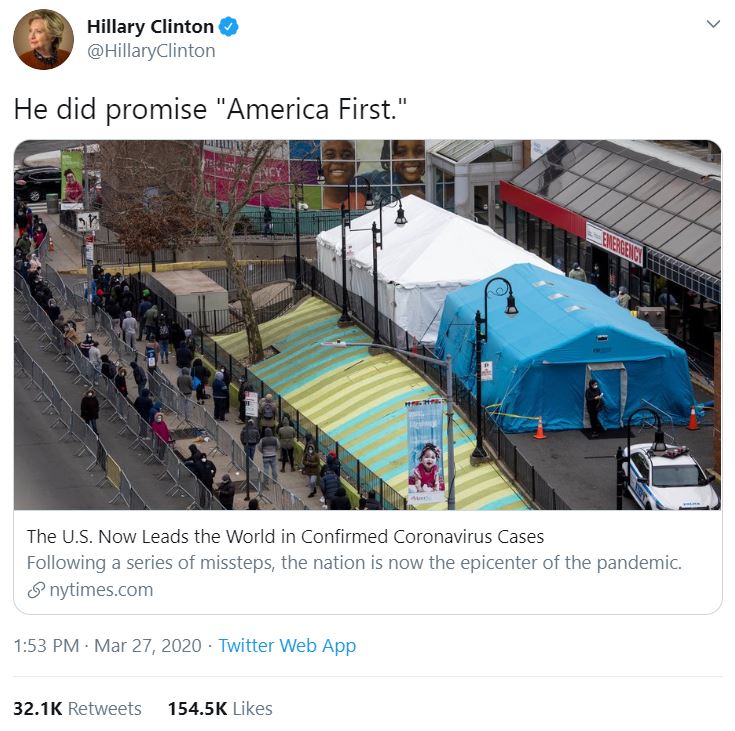 Put aside the misleading math. The U.S. may have the highest number of confirmed cases, but that’s only if you believe China’s phony numbers, where the spread supposedly stopped cold weeks ago; no one actually believes that. When you compare the per capita number of cases and deaths, we’re actually doing well compared to nations in Europe.

Hillary’s tweet wasn’t about math. It about her personality defect. And uncontrollable bitterness.

Delete your account. This isn’t the time. This can’t be the new normal, where American tragedy is applauded for the sake of political opportunism. https://t.co/7aYatlS8jV

The only good news, if there is any, is that fewer people, and indeed fewer Democrats, listen to her. The reason is simple: she’s a loser, and Democrats don’t tolerate losers forever.

The put up with the community organizer for 8 fk years.

notamemberofanyorganizedpolicital in reply to Buffalobob. | March 30, 2020 at 4:14 pm

If the LOSERS PAY DEM enough, the Dems just Love them up forever!

Hillary and Nancy are in a race for the most wretched woman in America.

Perhaps the time has come to reinstate the burning of Witches again.

Pretty sad when you have to wish yourself a Happy Birthday.

Wonder if her fate will be like that of Herod (Acts 12:21-23)? Something’s eating the old buzzard.

Let this crazy woman steal the nomination from Biden, by him dropping out before or at the convention, and Bernie Sanders so that Trump can slap her down again in 2020.

I liked video so much I just watched it again. Another of my favorites shows Pres Clinton jumping around like a ten year old with joy when they thought they would win in 2016. Traitorous grifters both of them should be in prison.

Barr is a VERY mixed bag. The EARN act will make it impossible as a legal matter to encrypt messages.

What a useless pernicious douchebag.

I think at this point, we should understand Barr has sold-out. Even if he were to prosecute clinton and gang to the fullest extent of the law, it’s become too far removed from most the minds of most dummies who vote.

Upon relection, look for PDJT to sh-tcan Barr.

Barr being a Bushy,did anyone expect anything different from him.

Bear in mind that this manifestly vicious, miserable, contemptible and vile crone has the brazen gall to criticize Trump, when it is her own Dhimmi-crat Party that indefensibly and foolishly opposed the common-sense China travel ban that undoubtedly saved countless American lives, which opposition was grounded in the utterly laughable and idiotic notion that it was allegedly “racist.”

Shut up, you worthless, embittered and imperially arrogant nag/scold/shrew/harridan/termagant — no one outside of your coastal, Dhimmi-crat lemming worshipers gives a damn what you think about anything under the Sun.

Guy Jones you nailed it and I learned a new word!

notamemberofanyorganizedpolicital in reply to JimWoo. | March 30, 2020 at 4:18 pm

“Termagant” fits most of DEM men too…..

The Dems are now the party of “open borders.” Imagine how well that may have worked out for the country in an situation such as we are experiencing now (even with out controlled borders). Something else Trump should play when campaigning.
BTW, he just declared the firearms industry (stem to stern, including retailers and their employees) an essential industry. He may have just assured his re-election.

notamemberofanyorganizedpolicital in reply to DaveGinOly. | March 30, 2020 at 4:21 pm

RE: President Trump “just declared the firearms industry (stem to stern, including retailers and their employees) an essential industry.”

And it is too.

Needed to fight out domestic tyrants!!!!!

I really try to avoid words like “Dhimmi-crat” because they seem to suggest that I have to resort to name calling instead of pointing out exactly how idiotic their positions/policies are, but if you correct that single typo, this exactly describes how I feel.

I’m Jewish, and, over the past several years I have been enormously disturbed/offended/appalled by the Dhimmi-crats’ open embrace and enabling of prominent Jew-haters and Israel-vilifiers/slanderers in their Party and outside of it (e.g., Farrakhan; Sharpton; Ellison; Talib; Omar), as well as their decades-long whitewashing/obfuscations/rationalizations of the sundry and intrinsic pathologies of ideology of “Submission,” to wit, supremacism, totalitarianism, belligerence and hatred of non-Muslims.

Thus, I have made a conscious decision to call these reprobates “Dhimmi-crats,” which I submit is a totally accurate moniker that points out their allegiance to, and, their enabling of, the Islamic supremacist agenda and its concomitant, brazen and unabashed Jew-hatred.

In defense of the democrats and muzzies, they hate EVERYONE.

notamemberofanyorganizedpolicital in reply to guyjones. | March 30, 2020 at 4:22 pm

WE WILL Learn from the History of the 1930s!

Fear of racism labeling led to Italy’s downfall in this crisis…never forget.

Yeah, I don’t get this. It’s a shame in some ways that everyone else tries to copy the U.S.A. We’re great, no doubt, but Italy didn’t have a civil war over slavery, so they should abandon the whole penitence schtick.

notamemberofanyorganizedpolicital in reply to Close The Fed. | March 30, 2020 at 4:24 pm

We need a break out of how many middle east illegal aliens Italy was forced to take, unlike their imported Chinese Government slave labor……

Direct Quote of Hillary Clinton as reported by the NYT (I think it was).

“When I was little my mother told me I could be someone different every day!”

“I have watched various versions of this video a gazillion times. I can’t get enough.”

“Huma, you have one job, keep the hag from drunk tweeting before noon.” Bill Clinton

Which video is my favorite?

It’s so hard to choose, guess I’ll just have to watch them again.

Ugh. I am verklempt.

Out of the top 30 countries that have 1,000 or more coronavirus cases, the US is number 16. We are not “No. 1.” In fact, most of western Europe leads in this particular contest, along with Israel and Iran.
Streaming stats, infographics, headlines, and more:
https://www.youtube.com/watch?v=qgylp3Td1Bw

I’m no holy roller, but it’s hard not to see divine intervention in Trump’s 2016 victory over the Evil One.

The US does lead the world but not per population. Europe has many countries that overtake us in that regard.

What are the biggest factors in spread? Population density and tourism/immigration.

Also, China is lying about their numbers anyway.

First of all, must you use 20 year old photos of this drunk? What is she, the new trayvon martin?

Second, this POS is not in orison because of jeff sessions (another POS) and now Barr. After all this, it seems it will be Barr who will bear the greatest stain for letting this vile traitor go unpunished.

Poor crooked Hillary. She may be fearful of a dry wall specking compound shortage. She may have to go into hiding as the old crust peals from her face.

There is evil in this world. It is brought out by particularly evil people. Soros is in a class by himself, but Hillary isn’t as far behind him as one would think.

The death count can’t all be coincidental. Not possible.
The countless crimes masterminded by her with enough deniability to get away with it, regardless of who is hurt by her crimes. Her work to destroy other people because they dared to go against the Clinton Crime Family.

Hillary sold her soul long ago.

Punch-drunk? She says it with almost gay satisfaction, celebratory glee.

Hillary showed the full content of her character all the way back to Watergate:

May she come to a greater understanding of the COVID19 experience.

notamemberofanyorganizedpolicital in reply to NotKennedy. | March 30, 2020 at 4:31 pm

Sounds 100% identical to Nancy Pelosi now too doesn’t it.

If she only had a Global Initiative to help in times of need, oh that’s right, she did but they spent all the money and all the sources of funds dried up.

Hillary rejoicing in American deaths from Wuhan flu reminds me of a story from the Vietnam War, when a U.S. Army general was ecstatic that the weekly number of combat deaths for U.S. Army soldiers exceeded those of a much-smaller Marine Corps force. I guess he believed in the adage, “A big butcher’s bill is evidence of good tactics.”

Hillary’s stand-up comedy tour is just as successful and relevant as her presidential campaign.

Ya can’t sell what you never had. Hillary, thy name is Lucifer.

Folks, let us not forget where the ENTIRE Chi-Comm corruption of the US (and later the world and the UN) began.

It began with traitor bill clinton:

Hillary clinton saw how easy it was to betray the nation, so went into overdrive stealing everything in sight.

Sessions and Barr must bear full responsibility for this wicked beast going unpunished. In doing so, they are sending the message that this kind of corruption and treason is perfectly ok.

What a couple of assholes.

Have to cut Bill some slack. Can’t imagine what hell he went through married to this wretched, vile life form.

notamemberofanyorganizedpolicital in reply to Buffalobob. | March 30, 2020 at 4:39 pm

Bill is so corrupt I can’t imagine he had any grief from her.

Hillary was his sexual predator enabler,
just as Jacqueline Kennedy’s was Jack’s.