“Of all the groups they polled, nothing rates lower than the news media, and Trump beats them by 16% in approval” 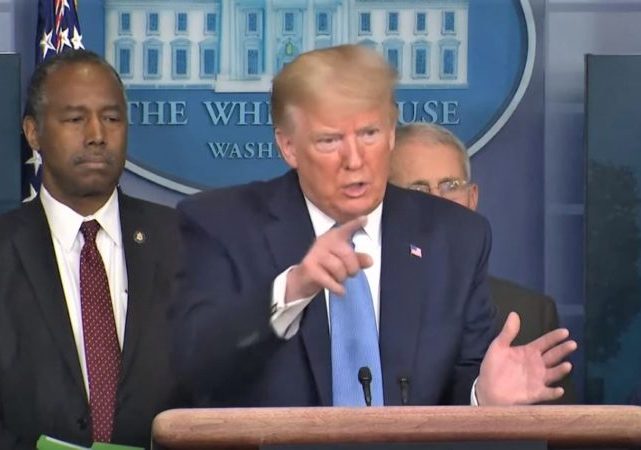 Gallup released a poll earlier this week that showed that President Trump’s handling of the coronavirus was supported by 60% and that his overall approval had surged to 49%.

On Wednesday, Gallup released an additional poll that shows that the American people trust the American media least of all on Wuhan coronavirus coverage.

Gallup – approval of their handling of the coronavirus:

Of all the groups they polled, nothing rates lower than the news media, and Trump beats them by 16% in approval.

Americans are generally positive in their evaluations of how each of nine leaders and institutions has handled the response to the coronavirus situation. Eight of the nine receive majority positive ratings — led by U.S. hospitals, at 88% approval. Only the news media gets a more negative than positive review.

These data are from a March 13-22 Gallup poll, with the field period starting on the same day President Donald Trump declared a national emergency over the coronavirus outbreak, and spanning sharp increases in the number of documented cases in the U.S., as well as the number of deaths.

About four in five Americans approve of the way their state government and government agencies such as the Centers for Disease Control and Prevention and the National Institutes of Health are handling the coronavirus outbreak. Similarly, 83% of parents of children younger than 18 rate their children’s school or daycare positively for its handling of the situation. And 82% of U.S. workers rate their employer’s response positively.

Meanwhile, about six in 10 U.S. adults approve of the response by their elected leaders in Washington: President Donald Trump, Vice President Mike Pence and the U.S. Congress as a whole.

I’m pretty sure this won’t be a surprise to regular LI readers who are privy to the despicable anti-Trump spin the media has engaged in since before President Trump even took office, but it probably is a surprise to the media.

They appear to be living in some kind of weird pre-internet and pre-social media time warp in which they were the only purveyors of news and they could freely script the narrative—and the minds of the American people—in any way they liked.

It’s the dream world they very much envision recapturing, as we have seen with their plaintive pleas to stop showing Trump’s daily pressers in their entirety because they are helping Trump in the polls.

But Ted Koppel told me he's concerned about the unfiltered coverage by TV networks:

"Training a camera on a live event, and just letting it play out, is technology, not journalism; journalism requires editing and context."

The media is slipping in every possible way, and they truly don’t seem to understand why.   Maybe that’s the saddest part?

The Press, Media, and Social platforms are spreaders of social contagion.

Gallup has conducted an annual media trust survey since the mid-1970s. A majority of Americans have not trusted the media since 2005.

“ Training a camera on a live event, and just letting it play out, is technology, not journalism; journalism requires editing and contextL.

“Who are you going to believe – me or your own lying eyes?”

Actually, I kinda like the idea of what Koppel is calling mere technology.

But I can see how lefties like him would prefer to not just show us what’s happening but also to “edit” out the parts that don’t fit the narrative (aka “context”).

They don’t want to inform us and let us draw our own conclusions, they want to tell us what and how to think — including what words and phrases we’re allowed to use.

Sorry to tell you, Ted, but YOU just told US why we don’t want or need you. Step aside. We’ll figure it out for ourselves.
.

Watching PDJT crush these propagandists live has been the highlight of his live press conferences, at least for me. “You write fake news and so does she.” “Cutie Pie.” “That’s a nasty question.” “Zero deaths.” I thought they would have learned after maybe the second presser and played it straight but they just can’t help themselves.

It’s a little depressing to see how popular this suspension/overthrow of the Constitution is among the very people who are losing their basic rights.

The “press” (meaning effort) is on heavily by the left/soros/etc. in funding trolls to trash PDJT on social media.

Check out a site like http://www.9gag.com, geared at young men internationally. It’s often funny, sophomorically sexy and animal-loving, but the anti-Trump trolls (or simple dumbasses) posting the most ingorant statements relating to PDJT are stunning.

Until we take back our schools, FORGET about taking back our country.

I am hoping, and seeing some anecdotal evidence, that these 2 months of forced homeschooling/public school from home will change the way many people view homeschool. I see my neighbors who would “never” homeschool talk about how they enjoy being with their kids at this time. That the kids are not fighting “school” as much as they thought they would, that they are able to get all the assigned work done in half the time the kids are at school (so why spend so much time there?).

I am hopeful that next school year will see a whole lot more of the public-school-at-home if not more traditional homeschooling. At least in my neck of the woods.

Does anyone know of a source for a time schedule of the President’s press conferences? The time seems to change. For a while it was 1:00 Eastern, then it started showing earlier in the day.
.

The corrupt bastards infesting most of our media are the biggest toilet-lickers of all.