Democrats’ Rescue Bill Plan: “This is a tremendous opportunity to restructure things to fit our vision”

Democrats’ Rescue Bill Plan: “This is a tremendous opportunity to restructure things to fit our vision”

“On a Thursday conference call featuring more than 200 members of the House Democratic caucus, lawmakers one by one laid out a sweeping wish list of provisions they want to see included in the nascent package.” 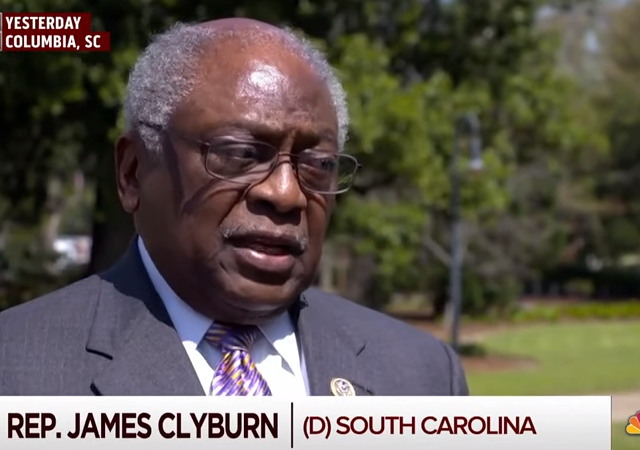 Nancy Pelosi didn’t just swoop in out of nowhere to kill the bipartisan Senate bill.

It was part of the plan since at least last Thursday, when Senate negotiations kicked off with the Republican goal of a vote on the bill today.

How crazy is it that less than 24 hours ago Schumer was talking about how *delighted* he was with the “bipartisan cooperation” on Coronavirus aid negotiations.

Then Pelosi got back into town, Schumer immediately flipped, and Democrats unanimously voted to block a critical bill. pic.twitter.com/gESFOstpm1

Last Thursday, after a session when Democrats in the House loaded up a list of liberal agenda items they wanted in a final bill, House Majority Whip James Clyburn, who almost singlehandedly won the Democrat primary for Joe Biden, revealed the extortion that was to come (emphasis added), via The Hill:

On a Thursday conference call featuring more than 200 members of the House Democratic caucus, lawmakers one by one laid out a sweeping wish list of provisions they want to see included in the nascent package, including a boost in infrastructure spending, an expansion of Social Security benefits and funding for states to set up an all-mail voting system in the event the pandemic extends into November’s elections.

“This is a tremendous opportunity to restructure things to fit our vision,” Majority Whip James Clyburn (D-S.C.) told lawmakers, according to a source on the call.

None of what is happening is by mistake or spontaneous.

BTW, Clyburn also is the person who recently Compared Trump to Hitler, Warns U.S. ‘Could Very Well Go the Way of Germany in the 1930s’.

Source writes, “not only are these completely unrelated to the coronavirus epidemic, they could prevent companies from participating in the loan programs altogether—directly causing unnecessary layoffs.”

This test run on our civil liberties has turned into beta-testing.

Time we conservatives take advantage of the DEMS Panic and
Un-Do them!

“Pluck the DEMS and thier MSM!”

Sadly, I understand what that means. This kinda says the same thing.. almost.

Please share Professor Jacobson’s news about this to everyone you know.

JusticeDelivered in reply to notamemberofanyorganizedpolicital. | March 23, 2020 at 11:34 am

Michelle, more like big, fat and wide. Rear view of tush looks like a cow, come to think of it, so does her face. A cow face who thinks she has style.

The Dems can barely conceal the drool dripping off their chins as they plot to seize power.

Trump is the only thing standing between them and another takeover.

Expect everything to be a life or death crisis if they ever take power again. With only Trump appointed judges standing between us and them if they do

Dems see an opportunity. Never let a crisis go to waste eh? Leftist ideology ahead of the nation’s well being. These people are trash.

notamemberofanyorganizedpolicital in reply to Whitewall. | March 23, 2020 at 10:26 am

And just think of all their constituents have “forced” to stay home and OBSERVE their Lyin’ DEM MSM……..

Democrats stab Unemployed Americans in the back to get money for Abortion.

notamemberofanyorganizedpolicital in reply to MattMusson. | March 23, 2020 at 11:00 am

notamemberofanyorganizedpolicital in reply to DouglasJBender. | March 23, 2020 at 11:17 am

Selfishness and greed are the essence of Evil
and of course represent the core values of DEMS.

I am absolutely opposed to dropping $100 bills from helicopters.

The Manchurian Party in action.

Seems the Fabin society is alive and well. WE DON’T NEED YOUR VISION

Trump should go on TV and tell people how sorry he is that their aid is being held up by Dems. Tell the dems to either take the deal as negotiated, not.

Dems rank and file are increasingly becoming disillusioned with Democratic party leadership. Their current actions are a great way to really piss off people, and cause many more defections.

notamemberofanyorganizedpolicital in reply to JusticeDelivered. | March 23, 2020 at 11:04 am

Their current actions are a great way to really piss off people, and cause many more defections….”

POTUS has called sate of emergency and needs to get help from SCOTUS to get things done – senile Nancy needs to be impeached.

I would rather see a lightening strike, or anything else with a similar outcome.

“None of what is happening is by mistake or spontaneous.”

I don’t think any conservatives think that. And this is not a binary choice of either

1. Pelousy’s arrival caused the Senate Socialist-Democrats to vote against cloture on the Senate bill; or,

Those two are the obverse and reverse of the same coin.

Makes you wonder who she got her marching orders from. With all the leftists falling in line, as they always do, you know it had to be a Daddy Warbucks for their causes that issued this dictate.

None of this is a surprise. The party of infinite spending was always going to have more of a spending plan than the stupid party. This approach to solving problems plays to the Democrat’s strength.

And the Republicans walked right into it.

Let me guess what is on the democrat wish list: green new deal featuring the resurrection of solyndra? 768 new tax payer funded planned parenthood centers? Force nuns to distribute condoms? Close all physical polling stations in favor of ballot harvested mail in only elections? Single payer healthcare run by the 2020 democrat Iowa Caucus staff? I know I’m missing a lot of what they want to stick in there…

“funding for states to set up an all-mail voting system”.. Yeah, I can see why that is on the Democrats’ wish list. They can’t win an election on their platform, so they want to steal the election. California was their test run for this scam and the Republicans somehow managed to lose a number of seat – after all the mail-in ballots were counted.

Planned Parenthood has announced they will be spending $45 million to elect Democrats in 2020… If they’re spending that kind of money—why do they need a single cent of taxpayer money?

Great question. ANY organization of any type that spends one red cent on political contributions should be exempt from receiving ANY government aid.

notamemberofanyorganizedpolicital in reply to Taxpayer. | March 23, 2020 at 11:01 am

Time to Sue Planned P out of Life as they know it.

Don’t average Democrat base types have 401ks, or IRAs?

Probably not. As a group, they tend to have a very high time preference.

even gop onboard with a (yeah coached as temporary) UBI now, once enacted want to bet stopping it will be close to impossible?

An attempt can be made to tie it directly to this current situation, with a non-renewable expiration. This sort of kicks the can down the road, but would mean it would have to be renegotiated for a renewed UBI.

This could help slow the decline of the economy, along with helping to stimulate buying which is falling off due to the uncertainty of how long the state governments can continue to impose stay at home policies.

I’m not comfortable with it, but so many people, including myself right now, are limited with what they can do for income. Some places are hanging on, for now, but how long would they be able to pay wages for no work being done? Maybe a thought could be given to a pay it forward type deal, meaning people will have to work longer hours later to pay for time off now. Anything the government doles out now won’t equal most jobs regular pay.

Trump should show the Senate republicans who have lost their spine how they should be screaming for that “clean bill” that their friends on the other side of the isle scream for when they are sticking to Americans. in this case, the screaming can include showing the obstructionist Democrats trying to steal power from hurting Americans.

Kill the damn thing! Kill it with fire, spread the ashes to the wind and kill anyone bitching about its death.

If this isn’t a Kung Flu only bill, don’t let it live!

Past time for stand alone bills.
Should be able to fit on 1-2 pages.
No more pork and stuffings!