Bolsonaro and his press secretary, who also tested positive, spent time with Trump over the weekend. 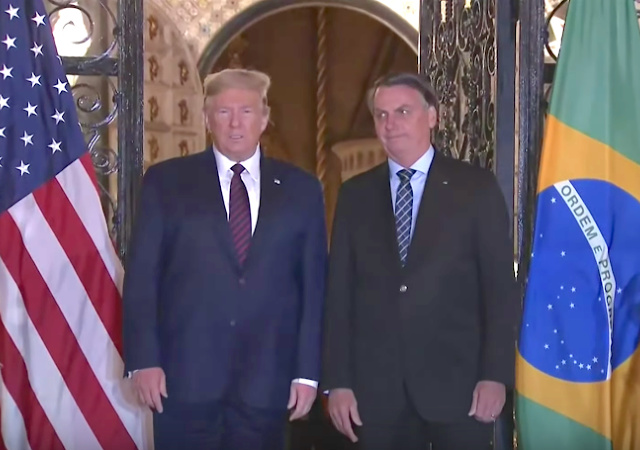 Now he is adamantly denying he tested positive and insists he does not have the virus.

I blogged yesterday that Bolsonaro’s press secretary already tested positive. The news raised concerns because Bolsonaro and the secretary spent time with President Donald Trump at Mar-a-Lago over the weekend.

So the reports of a positive test came out a few hours ago. Bolsonaro’s son Eduardo at first “appeared to confirm this to Fox News earlier Friday, adding that further testing was being done to confirm the diagnosis and the second set of testing was expected later in the day.”

But now Eduardo is denying everything:

Host Sandra Smith asked Bolsonaro if he could confirm his father had first tested positive for the virus and what had happened in between then.

“I don’t have this information,” he replied. “The information I have is the results that just came up telling that he is negative for coronavirus. I never listened that it was positive in the first exam. This is something that I don’t know. But, uh, everything’s good now.”

Bolsonaro then told Smith, to his knowledge, this was his first test for the virus.

“I have to get more information about what is going on because together with Bolsonaro, there were other guys, other people in the same team that went to the U.S. So, we are also waiting for the exams about the other guys.”

He denied his father was showing any symptoms. “He is okay,” he confirmed.

“They have to see what they are going to do. I think the best thing to do is everybody who was involved there, everybody who was there, should do the tests,” Bolsonaro advised, referring to the Brazilian president’s meeting with President Trump.

Bolsonaro then told Smith, to his knowledge, this was his first test for the virus.

“I have to get more information about everything — what is going on. Because, together with President Bolsonaro, there were other guys, other people in the same team that went to the U.S. So, we are also waiting for the exams about the other guys.”He denied his father was showing any symptoms.

“No. He is okay,” he confirmed. However, he said he believed his father was taking extra precautions after an aide that went on the trip tested positive.

If the President and VP Pence have CV, just shoot me now. If Pelosi is put in charge, I am buying a gun and a guard dog.

(not an incitement of violence)

Get a grip! What is going to happen to 99.9% of the people who test positive for the virus is that they are going to have a fever for a day or two, a runny nose, and then a cough with possibly some shortness of breath for a couple weeks. Then they will be fine.

Actually, only 85% will experience mild or moderate symptoms, with 15% requiring hospitalization. 60 year olds (Pence) have a mortality rate around 3.6% and 70 year olds (Trump) have a mortality rate of around 8%. These numbers are subject to change as more data is gathered, but that appears to be the consensus as of now. It’s one thing to be inciting panic like the media, and it’s another to be carelessly ignorant.

However this disease is known to be worse for old people. The older you are the worse it is.

I hope nothing happens to them either but I do have to say I’m a bit worried given it seems a lot of people they’ve met recently are infected.

The only saving grace is that Nancy Pelosi is herself 79.

notamemberofanyorganizedpolicital in reply to Tom Servo. | March 13, 2020 at 2:36 pm

We already know now with real facts (not the Communist Chinese Government Collusion with the DEMS lyin’ facts) that the Wahun-Media Virus is less lethal then the “Common Cold.”

If the President and VP Pence have CV, just shoot me now. If Pelosi is put in charge, I am buying a gun and a guard dog.

notamemberofanyorganizedpolicital in reply to MattMusson. | March 13, 2020 at 2:38 pm

Those only help if Pelosi is breaking into your house……

I wouldn’t wish the virus on anybody, but if Trump did test positive and quickly recovered (like most COVID-19 patients do), maybe Americans would finally settle the F down a little and get back to business

notamemberofanyorganizedpolicital in reply to Calypso Facto. | March 13, 2020 at 2:39 pm

Not if the Democrats and their Media/Communists have anything to say about it.

Twitter has now virtually confessed they are OWNED by
Communist China!

The mayor of Miami, who was at the meeting with Trump & the Brazilian president, has tested positive for the virus.

You will need to update the headline. His son already denied it, and the second test was negative.

This disease is not easy to spread. There is no known case of transmission on public transport. Even in families, fewer than half get it.

Why is there so much of it? Well, in Italy, a restaurant worker who broke quarantine spread it. In Washington, there were lots of cases in a nursing home. Almost all American deaths have been in that one nursing home.

The reason for the spike in Italy should be more widely publicized. In response to a call for cheap labor, the Milanese fabrics industry brought in 100,000 Chinese laborers some years ago, most of them from the Wuhan area which also has a large garment industry. Northern Italy was having direct flights back and forth to Wuhan ever after the outbreak in China had taken place.

Breitbart is reporting THIS IS A FALSE REPORT – NOT TRUE.

So, after more than 12 trimesters of failed witch hunts and warlock trials, they couldn’t dunk him, they couldn’t burn him, and they couldn’t hang him, but there may be progress to force social distancing through an agent that either originated or was made in China. Billions of dollars in collusion with leftists to influence our politics and elections and now this. Given the diverse precedents, and following the good rule established by ancient Jewish philosophers, we should wait for independent confirmation before deferring to the judgment and reporting of interests that may or may not be hostile to our interests.

BREAKING:
CNN’s Jim Acosta was accused of publishing a “real journalistic tangent and waste of time” on Thursday.

Source: Trump is concerned about coming into contact with people infected with coronavirus

“Known Germophobe is concerned about germs.”

When this all plays out it will have been a huge boomerang on the left. This exposes our China problem like nothing else could have. Every American is going to see how past administrations have sold us out to China. People will also see the actual numbers and compare/contrast with previous outbreaks and ask why the msm incited such a high level of panic and fear. And as time goes on, it will become evident that PDJT’s handling of the crisis plus all of his policies are geared towards protecting Americans, while democrat policies invites more of the same.

notamemberofanyorganizedpolicital in reply to CKYoung. | March 13, 2020 at 2:46 pm

RE: “When this all plays out it will have been a huge boomerang on the left.”

You’re darn right. Already Americans are HOPPING MAD at the MEDIA. And it’s only going to get worse for the Lyin’ Media.

Have you heard this?

Thursday’s podcast is riddled with obscenities as we cover the liberal reaction to President Donald Trump’s address to the nation about the government’s response to coronavirus.

People are currently losing their minds.I’m a manager at a grocery store where I live and once they declared this a pandemic, all hell broke loose.Toilet paper, paper towels,disinfectant wipes, bleach, totally out. Empty barren shelves. Canned goods, pasta, frozen vegetables, very low. It’s totally stupid.