Biden’s lead in polls have jumped since Sanders praised Castro on 60 Minutes. 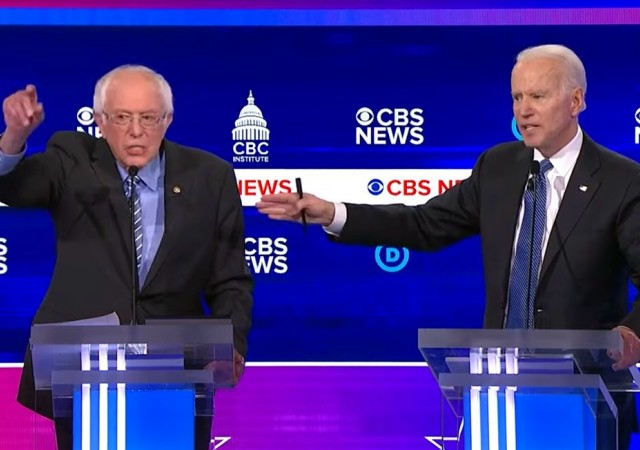 Arizona, Florida, Illinois, and Ohio vote on Tuesday. Florida is the big trophy due to the delegates. It has 248 delegates with 219 of them being pledged delegates.

After stomping Sen. Bernie Sanders (I-VT) two weeks in a row it looks like former Vice President Joe Biden will once again claim victory in a top delegate state.

The University of North Florida took a poll from March 5 to 10. It found that “66 percent of likely Democratic primary voters” prefer Biden. Only 22% chose Sanders:

“This is down to a two-man race and Biden is looking toward a blowout in Florida,” said Michael Binder, the director of UNF’s Public Opinion Research Lab. Sanders, he said, “is facing a do-or-die debate on Sunday if he hopes to swing the momentum.”

The poll of 1,339 Democratic likely voters “paints a bleak picture for the Sanders campaign.”

A Florida Atlantic University poll found that Biden leads Sanders 61% to 25%. He gained 19 points since January in that poll. Among those polled 10% remain undecided while 3% chose Rep. Tulsi Gabbard (D-HI).

Biden probably gained a huge lead due to his support with Latinos. A Mason-Dixon Polling & Strategy poll showed Biden leading with Latino voters in Florida, 48% to 37%.

Why did this happen?

“We’re very opposed to the authoritarian nature of Cuba but you know, it’s unfair to simply say everything is bad. You know?” Sanders said at the time. “When Fidel Castro came into office, you know what he did? He had a massive literacy program. Is that a bad thing? Even though Fidel Castro did it?”

Democratic State Rep. Javier Fernandez warned Sanders that he would lose Florida if he is the Democratic nominee:

“Donald Trump wins Florida if Bernie is our nominee,” warned State Representative Javier Fernandez, a Miami Democrat. “If Bernie Sanders is atop the ticket, it’s going to make it tougher for all of us to win in Florida.”

notamemberofanyorganizedpolicital in reply to TheFineReport.com. | March 12, 2020 at 3:59 pm

Just like the entire Corrupt DNC and the Democrat Leaders.

That DNC Rigging is Amazing!!!!

Look Ma! I can Rig the Elections hands free!!!!!

“Democrats Are So Serious About the Coronavirus Threat…

TheFineReport.com in reply to notamemberofanyorganizedpolicital. | March 12, 2020 at 8:35 pm

The GOPe is right there with them.

notamemberofanyorganizedpolicital in reply to TheFineReport.com. | March 12, 2020 at 9:33 pm

Mittens has been the life long poster child for spoiled rich brats.

OK, let’s be clear on something.

There’s some of the so call “Latinos” that also sing Castro’s praises.
I honestly can not say “many” or “most”, but the thing is notable enough. I’ve gotten the “but you guys had free healthcare and free education” argument countless times. I’ve also gotten other, worse pro-Castro expressions.
Also, during the times when Cubans had all those generous benefits, (undeserved in many cases, I know), I heard more than enough downright hateful comments toward us from other “Latinos”, comments that can only originate from envy. Furthermore, don’t forget that Miami Dade, Broward and Palm Beach usually vote Democrat.
Just wanted to point it out.

Guess those literate Cubans also know BS when they hear it.

I wonder if some Florida voters wish there was a “None Of The Above” choice on the ballot. They want neither a communist who will confiscate their retirement savings nor an Alzheimers sufferer who painfully reminds them of their friends.
.

I am looking forward to seeing Bernie Sanders and Michael Moore ride off into the sunset, arm in arm.

notamemberofanyorganizedpolicital in reply to JusticeDelivered. | March 12, 2020 at 4:03 pm

I thought the Democrat/Progressive/Leftist/Communists were against gay conversion therapy?

There is no horse large enough to carry that fat-ass moore.

notamemberofanyorganizedpolicital in reply to The Friendly Grizzly. | March 12, 2020 at 4:31 pm

TheFineReport.com in reply to notamemberofanyorganizedpolicital. | March 12, 2020 at 8:39 pm

You mean 120%, don’t you? At least that’s what Constitutional law professor odumbo probably said – and in each and every 57 states.

Obama Sutra – An Illustrated Guide To 57 States of Ecstasy:
https://www.amazon.com/Obama-Sutra-Illustrated-States-Ecstasy-ebook/dp/B006GWYG0Q

“Donald Trump wins Florida if Bernie is our nominee…”

notamemberofanyorganizedpolicital in reply to McGehee. | March 12, 2020 at 9:34 pm

What scares me more than Pelosi is the state of FL and how the snowbirds have almost ruined it. They came within two percentage points of electing a lying liberal crook, but I repeat myself, over DeSantis in the last election. That means they simply do not care about the facts or competence of the person running. All they care about is the “D” after their name. I do not believe it would matter if it were Sanders or Biden. The North East liberals would vote for either.

Here is the Demorat who came within two percentage points of being elected the governor of FL!

I am telling you that the Dems will elect anyone with a “D” behind their name.