We are humbled, thankful, and incredibly grateful for God’s unending favor and grace in our family. 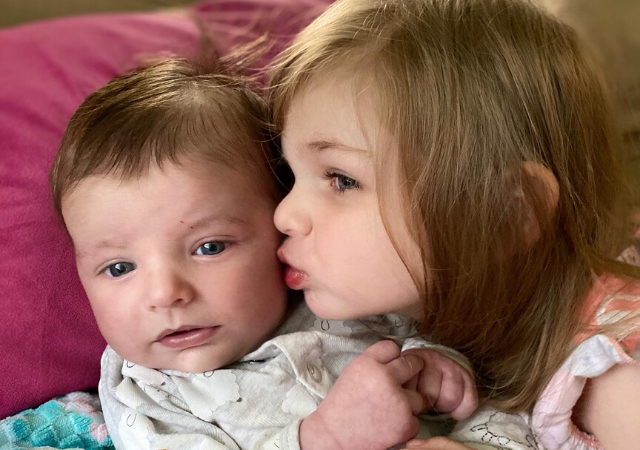 Baby Walt turned four months old yesterday, though it feels like he’s been with us always. And seems impossible that it’s only been four months.

For those new to Baby Walt’s incredible and dramatic story, our little boy Walter was born November 24th via emergency c-section. Immediately after birth, he was diagnosed with an extremely rare heart condition and life flighted to Houston’s medical center.

After a few horrifying weeks in the NICU, things took a turn for the worse and his doctors moved him to the PICU. On December 9th, Walt had heart surgery. Surgery which could not have gone better (according to the surgical team). He then had to learn to breathe on his own and then feed. Miracle after miracle after miracle and he came home December 30th.

Two pediatric cardiology appointments later and Walt couldn’t be healthier or more well, in their opinion.

God has been with us and with Walt through this entire ordeal and months later, we are still seeing his provision and his providence in our lives and in the life of our son. Walt has rearranged our life and our priorities and shifted our view of… everything. In the best of ways. We’ve been and continue to be abundantly blessed by the prayers of so many people all over the world. Many we know, even more we do not. People earnestly and diligently praying for our son and our family. Easily the most amazing thing I’ve yet to experience in life. God is always and forever faithful.

Walt looooooooves Mommy and Me workouts. Though he spits up. A lot. 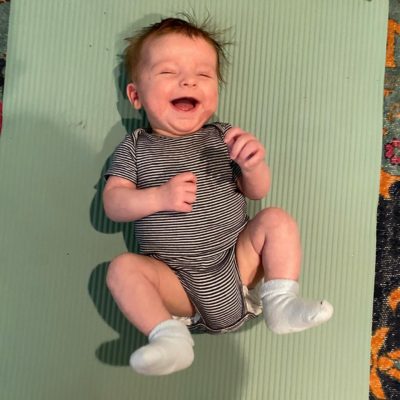 He’s suddenly decided he doesn’t want to sleep at night and thoroughly enjoys baby sweet potatoes. Is a snuggle bug. He’s happiest when he’s being sung or read to. He coos and bats his eyes. Such a little charmer, this guy. And like his little, big sister, is not a child that is willing to be ignored. I love that about him already.

Walt’s strong (super strong for a baby) and is already bored of babyhood. He never sits still and is always eyeing his sisters when they’re up and running around. There was a time when we were concerned about the potential for developmental delays. We have zero reason to believe he’ll have any issue in that department given his current progress.

We are humbled, thankful, and incredibly grateful for God’s unending favor and grace in our family. God is always and forever faithful. A huge thank you to each and every one of you who has prayed and continued to pray for our son and our family. You have given us hope and brought peace to us when we needed it most. We thank you and we love you. The Legal Insurrection family is truly special.

As we continue on our journey, I hold on to this (and others daily), “Let us hold fast the confession of our hope without wavering, for He who promised is faithful.” Hebrews 10:23

Thanks for the update, a ray of light.

Where did all of that hair suddenly come from!?!?!?!

Great to read that he’s doing so well!

Beautiful photos, nothing less than wonderful news! All the best, always.

I like a good laugh and cry at the same time.

Thanks for posting the update and the really sweet photos!

I canNOT beloevemhow alert he is!
What a glorious head of hair.
As always, PRAISE GOD for miracles.

Really, proofreading is my friend. But, not today.

Kimberlee, I believe he looked more like you right after he was born…. Funny how that changes…

Very happy for you, Walt and your family!

Your children are adorable!

This is such great news, Kemberlee. I have to believe that God is looking our for you, your husband, baby walt,and his big sister (Sorry, I don’t recall her name).

Kemberlee, thanks for the update. Blessings to all in Walt’s world!

Ah to be blessed with a new child. My oldest daughter didn’t have severe health problems when born–but she did have an abdominal hernia which a pediatric surgeon repaired when she was five weeks old. It’s amazing how quickly young babies can heal. But count your blessings and look to the future with your precious child.

Thrilled that he is such a big, healthy, happy baby boy. Prayers continuing!

Leslie you are blessed as is baby Walt…he is just beautiful
Keep loving on him enjoy this fleeting time.

What Covid-19?? Little Walt is thriving.. such wonderful news…

He is the future.. and it is bright. Thank you.

God bless him, and your family. Looks like he had just watched a recent Joe Biden “briefing”.

Great news. Thanks for sharing.

Beautiful. Thanks for the reminder that life is good.

Wonderful News! Answer to Prayer. Lord, let anything bad happen to me, not my kids.

though it feels like he’s been with us always

Been there and Amen, sister.

I didn’t know how much I needed baby fix! Lovely children.

Congratulations to Walt, and to you for earning the full quota of parental chores yet again.

Great news and such a cutie to boot! America has the best healthcare in the World

If I ever learn to download a picture I will send you one of little Mila.

PTL Thank you for the update! They’re both beautiful children and I am so happy for you! ♥️

PTL Thank you for the update! They’re both beautiful children and I am so happy for you!

Does he look unhappy with the lack of social distancing in that first pic?
j/k 🙂

A handsome boy with a fantastic smile. Praise God!

It won’t be long now before he is scooting around on all fours on “seek and destroy” missions through the house.

Baby Walt is like “Why are you kissing me?” 🙂

Oh my goodness he is adorable! All that hair! (My babies were bald for forever.) He has so much personality in your photos!

Thank you for the update. You made the sun shine on my day! May God continue to watch over Baby Walt and your family.

May God continue to bless your family.

So wonderful to know.
Thank you for sharing with us all throughout.

Look at that little dude! He already has cute girls wanting to kiss him.

So happy for you with this good news. God Bless!

What a blessing. May this family stay well, and grow and prosper.

Forgot to add yesterday that from this:

“Is a snuggle bug. He’s happiest when he’s being sung or read to. He coos and bats his eyes. Such a little charmer, this guy.”

He is an unapologetic flirt.

When your angels grow up this will just be another flu they plan for. Or better yet, medical science has erased flus as something to worry about. I envy them. And you. God bless!

I am so happy for you and your family and so glad that the little one is doing so well.

However, pictures as cute and precious as the one at the top require a warning label, lol.

What wonderful news!! Love the pics.
THANK YOU for this great news.
We all needed it.
Looking forward to next update

Your latest post and photo’s of Walt and his sister are absolutely AWESOME. Walt is going
to become a ‘chick magnet’ one day and he doesnt’ even know it yet. However, as a grandmother with three grandson’s I have become an expert in identifing these things. I am so happy and thrillled that Walt is showing all of us the Power of Our Lord. The doctors and all of those that have supported you and. your family through these many months are miracle workers in their own way. God has His way of making all that is good in life happen for the right reasons. He knew from the beginning that Walt was the essence of a true fighter and He has shown you, your family and all of us who follow this miraculous story that as the saying goes…’Babies are Gods way of saying that life must go on’. Walt is here amongst us to deliver that message. I am blessed to be able to follow your families journey down this road of miracles. WALT is so very precious and I continue to pray for your miracles with WALT to continue!