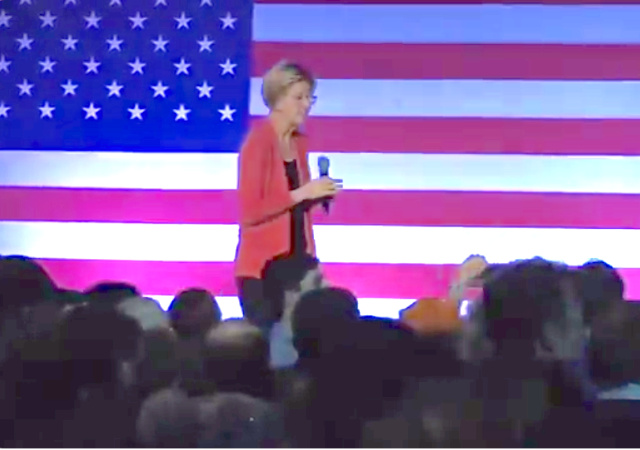 Warren then agreed to boycott the next AIPAC conference on March 1-3.

“I’m an American Jew and I’m terrified by the unholy alliance that AIPAC is forming with Islamaphobes and anti-Semites and white nationalists. And no Democrat should legitimize that kind of bigotry by attending their annual policy conference. I’m really grateful you skipped the AIPAC conference last year, so my question is if you’ll join me in committing to skip the AIPAC conference this march?” the audience member asked.

Tonight, Elizabeth Warren nodded along and smiled as a questioner slandered AIPAC as “an unholy alliance” of “Islamophobes,” “anti-semites, and white nationalists” that perpetuates “bigotry”

Without blinking, Warren then agreed to boycott next year’s AIPAC conference pic.twitter.com/U2MJ6DCTdZ

I thought Warren considered herself pro-Israel? She said in the past, “Israel has the right to defend herself.”

2/ Since Warren nodded along as this questioner said Democrats who attended AIPAC were “legitimiz[ing]…bigotry,” it’s worth noting that Warren has previously spoken at or attended at least 4 AIPAC events as a Senator pic.twitter.com/QoV8twr77m

However, Warren has not said anything nice about President Donald Trump’s peace proposal between Israel and the Palestinians. She has never condemned the anti-Semitic rants by Reps. Rashida Tlaib and Ilhan Omar.

Warren said five days ago in New Hampshire, “For America to be a good ally of Israel and the Palestinians, we need to get both parties to the table. We’re not getting that if we just stand with one party.”

Someone caught a tweet from IfNotNow pushing Warren to skip AIPAC.

Why did IfNotNow delete their tweet showing their members bird-dogging Elizabeth Warren to skip the AIPAC convention? Is it because they recorded her saying that both parties must negotiate and she didn't just focus on pressuring Israel? Here's a screenshot: pic.twitter.com/HL4Y9XO5Be

Samantha Mandeles has written extensively on this anti-Israel group. One of her investigations found that IfNotNow developed the supposed grassroots anti-ICE “Never Again Action”

“Those are my principles,” she said. “If you don’t like them, I have others.”

Warren, obnoxious, with head stuck up her ass. I have a neighbor who is a classic TDS case, she is rather slow and in total TDS meltdown.

notamemberofanyorganizedpolicital in reply to JusticeDelivered. | February 7, 2020 at 4:56 pm

I don’t THINK she is…but Warren strikes me as being very stupid…..

3 months ago, I thought Warren was going to be the nominee. I severely underestimated her ability to annoy and aggravate everyone who ever hears her speak.

She lacks even a scintilla of self-awareness.

I think she just takes it that everyone else is pretty stupid and will fall for this crap.

That sounds exactly right. We will know more when she is down South Carolina at the end of the month. I will be looking to see if she pulls a bottle of hot sauce out of her purse or not. HRC has had her ear and it will be interesting to see how far in she has climbed.

She isn’t that smart: she’s just COMPLETELY sociopathic: meaning, she gets away with crazy things because no one would normally suspect she would be doing such crazy things, or perpetrating such outrageous lies.

Further, she faced oppositio from the corrupt wimps of the GOP – until Prof. William Jacobson, and PDJT.

She was easy to expose, but it took guts to face the wrath of the corrupt scumbags in the democrat media in doing so.

The corrupt scumbags in the democrat media have been neutered. PDJT did it. Don’t EVER give them back a scintila of credibity, respect or responsibilty. EVER.

Claiming you’re an Indian when you are obviously not and making not even a miniscule effort to pretend to be is not the move of a genius. Neither is openly insulting the Chief Justice during an impeachment trial, thus ensuring a majority vote to acquit on both charges.

She was very likely vying for the least intelligent professor at Harvard.

The DNC primaries push bigoty. Muh It’s worth a shot.

Just a thought here, but is it possible that she smiled and nodded because she’s so stupid or was paying so little attention that the name “AIPAC” didn’t register with her, and she wasn’t sure who or what the person was talking about?

Since fauxcahontas has appeared more than once at AIPAC, she knows exactly who she’s avoiding. She’s clearly pandering to the Israel-hating base.

Are you willing to give her a pass, so that she can excuse herself from supporting the animals that wish for the genocide of all Jews? Why don’t you give a pass to the holocaust deniers as well? While you’re at it, why not join the dems in accusing President Trump of anti-semitism? Your comment, among many others you have posited, is a joke.

BTW, I dare you, as a rags wannabe, to call me an “idiot,” as you have many others on this site. I’ll wear it on my sleeve, and wear it on my way to buy more popcorn. You have self-inundated yourself with down-votes more than anyone (and deservedly so) since the famous rags.

notamemberofanyorganizedpolicital in reply to bear. | February 7, 2020 at 5:28 pm

RE: “..Are you willing to give her a pass, so that she can excuse herself…”

Isn’t that sort of like how the 1920’s Wiemar Republic got the Third Reich?

tom_swift in reply to notamemberofanyorganizedpolicital. | February 7, 2020 at 9:18 pm

The perversion of the Weimar government is a very instructive lesson . . . or it would be if anyone actually studied it.

Unfortunately today the NSDAP (“Nazi”) is reduced to a boogey-man, an amorphous and essentially meaningless smear to be thrown at political opponents and something to frighten naughty children (i.e., college students). The idea that anyone might study it seriously is too often regarded as comedy. Imagine what your neighbors would say behind your back once word got out that you were seriously “studying Hitler.”

And ignorance spells big trouble. It can happen here.

Pointing out that the evidence could be showing that Warren may be almost totally stupid is hardly a ringing endorsement.

Warren is not stupid. She is two faced. During Obama’s Administration, Warren ran point on TARP and not only spoke regularly with every top CEO in the country, she did so with such frequency that she had all of the Top CEOs personal cell phone numbers. Let us not be blinded here. Prior to that, she worked with all the top CEOs to shape the nation’s bankruptcy laws. Warren is very well-connected and does not need a playbill to know who has influence and who has money. Warren, like seemingly all the leftist elite, take it for granted that they can say one thing in mid-town, another thing downtown and never in the MSM be held accountable. The Leftists are confident in #GruberStupid voters.

AS Warren did with the top CEOs daily during TARP, it would not surprise me if after this particular Q&A her staff was on the phone with AIPAC spelling out her particular Green Room accommodations for next month. We could not get Hillary’s Wall Street speeches released during the 2016 campaign where she loved them to death behind closed doors and lambasted Wall Street in front of the cameras at campaign stops to prove this duplicity. As if that would add up to a hill of beans to the MSM anyway. Those of us that pay attention and are not distracted by shiny objects and squirrels see this and are rightly outraged by this affront to our sensibilities.

You know what, you are an idiot. Just because she’s been to AIPAC’s conference a few times doesn’t mean the name automatically registers with her.

Bernie has the “squad at his back.” Warren is attempting to slip in between the jihad-loving, anti-semitic squad and bernie to gain ground in NH. Sorry lizzy, you can’t co-opt the bernie-bots. They’re all in, and not for you.

notamemberofanyorganizedpolicital in reply to bear. | February 7, 2020 at 6:14 pm

Aren’t they suppose to have their 50 trillionth DNC Debate tonight?

It is tonight with the 7 Dwarfs…….

In what way is AIPAC snuggling up to anti-Semites or White nationalists?

So if I claim that the Democratic party is an unholy alliance of Islamic terrorists, Hispanic invaders, anti-Semites, and White communists, would Lizzie leave the party based on my claims?

Lizzie is doing her stand up comedy act again tonight!

Elizabeth Warren Thanks Illegal Immigrants Who Helped Her Iowa Campaign

Wrong kind of Jews, I guess.

The senator is so desperate that she’ll do anything to win the favor of the anti-Semitic left wing of the Democrat Party.

This is the New Democrat campaign strategy: Telling large groups of voters that they aren’t good enough to vote for you.