“No justice! No peace! No racist police!” 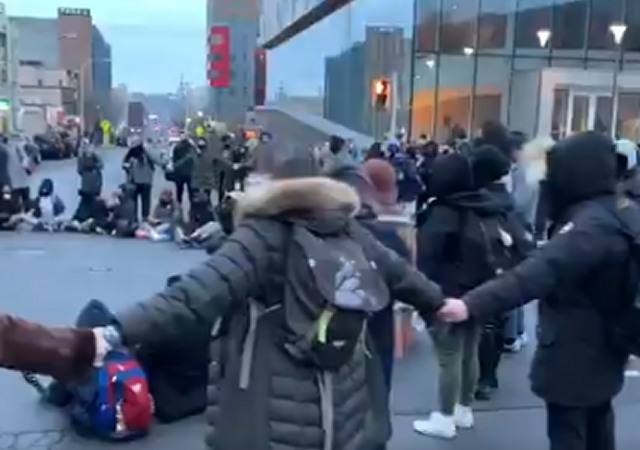 These students recently said they are in fear for their lives yet now they’re blocking traffic.

Leftist protesters at Syracuse University blocked off at least two city blocks Wednesday night in what is the latest development in the months-long standoff between the school administration and protesters who have named their movement “Not Again SU,” a reference to a string of reported racist and anti-semitic incidents on campus.

Syracuse.com reported Wednesday that 100 students, faculty, and other leftists protesters took to the streets of Syracuse, New York, near the university campus, and staged a sit-in, blocking and holding up traffic for at least two city blocks. Protesters chanted, some of whom wore black masks, chanted, “No justice! No peace! No racist police!” and “SU puts the ‘S’ in White Supremacy.”

Protestors at @SyracuseU blocking the intersection of Waverly and Crouse chanting phrases like “SU puts the ‘S’ in White Supremacy.” @CNYCentral pic.twitter.com/YHhzcu9UAd

I would hope that someone has some traffic cones handy….

(There was a twitter video of someone blocking a lane of traffic and maddening the drivers. From off-screen comes flying a traffic cone, nailing them in the head and knocking them out of the lane and down onto the shoulder. I laughed.)

Rioters blocked the streets in West Hollywood in the Rodney King riots. They were stopping all traffic and allowing one car at a time to pass. I refused to stop after they let the car in front of me go through and just drove through, brtushing past the rioters who tried to stop me. I lost a windshield wiper, but when I brandished a pistol, they decided to let me through.

Yet another reason that I am reluctant to identify myself as a NY resident.

Where are some firehouses and CS-laced water when they’re needed most?

As a parent, if I knew my child was doing something this foolish, I’d yank him out for a semester at least.
Seems administrators are simply doormats now. Pitiful.

I looked at the Syracuse student newspaper story about this, and the comments are blistering. Ordinary students hate what these troublemakers are doing and that they’re being allowed to disrupt the normal functioning of the university. Not a single letter supporting this “protest”.