“Defendant Sanders is clearly an independent and is clearly not a Democrat, by his own definition.” 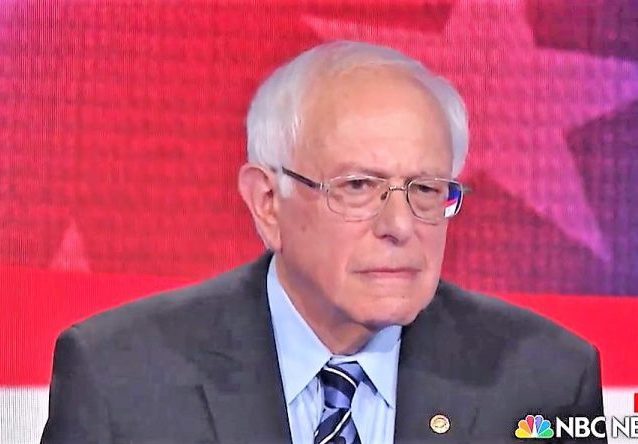 Now two Florida residents, who are registered Democrats, sued to keep Sanders off the Democratic primary ballot since he is an Independent.

The primary takes place on March 17.

The suit lists the following as defendants:

The plaintiffs claim in the lawsuit that they “have the right to cast their March 17 Democratic presidential preference primary votes for those who are really Democrats, not independents, and are entitled to this court’s protection of their right to vote for a Democrat, with the results not diluted by Defendant Sanders’ unlawful participation as an independent interloping improperly in the (primary).”

From the Tallahassee Democrat:

The complaint asserts there is no basis in Florida law for an independent to run in the Democratic primary. It also notes that Sanders has raised nearly a million dollars as an independent running for re-election to his U.S. Senate seat in 2024.

“Defendant Sanders is clearly an independent and is clearly not a Democrat, by his own definition,” the lawsuit says. “His current ‘day job’ is as a United States senator and he has consistently, proudly asserted his service in that role as independent.”

The Vermont senator appeared on Florida ballots in 2016 during his first bid for president. He finished a distant second to former Secretary of State Hillary Clinton.

It’s too late to actually remove Sanders from the ballot. Thousands of Florida voters have already returned mail ballots in the Democratic primary, a fact mentioned in the complaint.

Florida has a closed primary, but the law allows the state party to decide who can appear on the ballot.

The Florida Democratic Party voted in 2019 “to include major candidates with national attention and national reach.” This is why the party’s executive director Juan Penalosa described the lawsuit as “ridiculous.”

Too bad for Warren that Old Crow Medicine Show has already been taken.

Zero Standing – case will be dismissed.

That was my first thought as well. Further, what actual damage does it do them if he appears on the ballot? was someone else left off due to that? on top of all that, the ballots are very near to being printed. It’ll be decided on a summary judgement against the plaintiffs.

The damage done is to Democrat voters in the primary by diluting their vote through the inclusion of a candidate who is only running as a Democrat for convenience. The whole purpose of a closed priimary is to allow members of the party represented vote for candidates from that party, not simply anyone, regardless of party affiliation.

In this case, though, state statute allows a political party to include anyone that it wishes in the primary. The Democrat Party allowed Bernie to participate in the primary campaigns and, therefor, he is also entitled to be on the Democrat primary ballot. even if he is not a Democrat.

This lawsuit should have been filed directly after the Party decided to allow anyone, with “national standing” to run on the Democrat primary ballot and before the Iowa caucuses.

The ballots have already been printed. Mail-in ballots have been distributed; I got mine a couple of weeks ago.

Gee – a down vote for pointing out a basic issue under Article III of the US Constitution.

Welcome to the club. I get those all the time, for simply citing the constitution, the law, court decisions, or simple uncontroversial facts.

Zero standing – plus too late.

This lawsuit should get all the sanctions applicable to nuisance lawsuits.

If the courts won’t remove hin, is that an acknowledgement that Bernie Sanders, the Communist, IS A DEMOCRAT?

Labels are slippery things. Warren is an American Indian. Bloomberg was a Democrat, then a Republican, and is now a Democrat. Buttigieg Is gay but either very or not much depending on the audience.

Bernie is not a Democrat? The Democratic Party has consistently permitted him to appear on the Democratic ballot sheet over many years in many places. That is their decision to make and I would be scared to death of the Courts deciding who is permitted to be a candidate and who is not. That just happened in Iran.

So, I don’t think the Courts have any right to make a ruling about who is permitted to run for office and I am a little concerned that someone even thinks it a good idea to go there.

The court’s not being asked to decide if Bernie’s a candidate, only if he’s qualified to be the Democratic candidate.

Which under the first amendment (as interpreted by the courts so far) is the business of the Democratic Party and nobody else.

The plaintiffs claim in the lawsuit that they “have the right to cast their March 17 Democratic presidential preference primary votes for those who are really Democrats, not independents, and are entitled to this court’s protection of their right to vote for a Democrat,

Well, they can still do that, but no, they’re not entitled to the court’s protection of that right.

with the results not diluted by Defendant Sanders’ unlawful participation as an independent interloping improperly in the (primary).”

And they’re definitely not entitled to this.

In any case, Sanders shouldn’t be a defendant; he has no control over whether he appears on the ballot.

Since you love to argue semantics, I’d point out that Bernie has some control over whether he appears on the ballot or not since he did apply to be on that ballot.

However, what you probably meant was that he has control but no authority over the decision to include him on the ballot or not, which is why he isn’t liable.

MIght be a clue where your party is going.

The only reason the DNC lets Bolshevik Bernie run for their nomination is to keep him from running as a third party and siphoning votes from their nominee. Bernie plays the game because he rakes in millions of dollars.

“Defendant Sanders is clearly an independent and is clearly not a Democrat, by his own definition.”

This is the wrong argument. Bernie is a self-confessed Marxist which, by definition, is antithetical to our Constitutonal Republic.

Most of those Democrat primary candidates on that stage cannot – simply cannot – truthfully swear to defend the Constitution against all enemies – because they self-indentify as the enemy!

The Federal Election Commission should remove them all from ballots nationwide.

It’s an interesting question, though. If you’re not even allowed to vote in the Democratic party primary without being a registered Democrat, why should you be allowed to run for President in that same primary?

I can offer the judge some latitude: Bernie is an undocumented Democrat.

I used to be active in the Republican party in suburban Cook County, IL (the Chicago suburbs.) In every primary, some of our suburban Republican officeholders were primaried by Democrats from the city of Chicago. The reason was (at the time) the Daley Machine required new vendors, those without any clout (read: connections), to perform some service to the Democratic Party to ensure they were loyal if they wanted to get a city contract. Running a false primary against a Republican was considered that kind of service, because the crook actually had to go out in the community and collect signatures in order to appear on the ballot. I remember one guy I did the oppo research on. He donated $40,000 to the Daley Machine the day after he filed to run as a Republican.

So I’m laughing at this Bernie thing.

How long before Bernie is decried by the liberal village idiots as a Russian plant to undermine our elections and allow Trump to win?

A socialist by any other name still stinks.

Pretty sure Bernie is a self identified “Communist”…

Bernie claims he’s not a Commie, but a Denmarkratic Socialist, which has Denmark upset.

Political Parties are voluntary associations with their own rules.

Each Party is entirely free to decide, but whatever process they choose to use, who can or cannot run as a candidate – or vote in a primary. It can, and does, vary by State – as each State’s Party leadership can make their own rules.

So, this case is going nowhere – there are no laws governing the process – only rules that are created by the Party itself.

These two would have more of a chance if they got some State level Party leaders to push the Democrat Party in their State to exclude Bernie for not being a Democrat. At least there is a process along this route that could conceivably work, however unlikely.