The Russians want Trump! and Bernie! and the media is manipulating the election again

The Russians want Trump! and Bernie! and the media is manipulating the election again

We’re back to Russia collusion accusations, it’s like deja vu all over again. 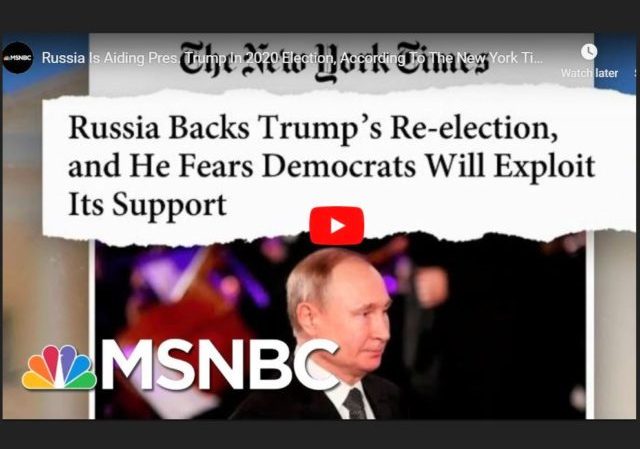 If you are not yet furious at the way our elections are being manipulated by and through the mainstream anti-Trump media, then you haven’t been paying attention.

We saw the pattern from 2016-2019 with allegations of Trump-Russia collusion. Vague accusations based on anonymous sources were launched one after the other by the NY Times, CNN, MSNBC and many other outlets to create a permanent crisis news cycle. It all fell apart with the release of the Mueller Report, but it never went away. There have been insistent insinuations post-Mueller that Trump remained a Russian asset.

And now it’s back again.

Yesterday, the NY Times and WaPo almost simultaneously (funny how that works) broke stories suggesting the Russians are intervening in the 2020 election to help Trump and that Trump was trying to cover it up. There were no details to the stories, no named sources. but it was enough to kick off another media frenzy.

Two tweets caught my attention that reflect the utter depravity of the accusations.

The first was by Harvard Law School Professor Laurence Tribe, someone who has disgraced himself and sullied his reputation with deranged hatred for Trump. Tribe accused Trump of treason and being an enemy of the nation. Tribe, of course, couched it as “if confirmed” as an out when called out on it:

This truly looks like TREASON in all but the narrowest possible sense. If confirmed, it’s utterly devastating. It points to an enemy of the nation sitting in the White House. This cannot stand if we are to survive as a sovereign constitutional republic.

This truly looks like TREASON in all but the narrowest possible sense. If confirmed, it’s utterly devastating. It points to an enemy of the nation sitting in the White House. This cannot stand if we are to survive as a sovereign constitutional republic. https://t.co/oWexilPnao

The other tweet was by the most bitter woman on earth, Hillary Clinton, who referred to Trump as “Putin’s Puppet”:

Putin’s Puppet is at it again, taking Russian help for himself.

He knows he can’t win without it. And we can’t let it happen.

Putin’s Puppet is at it again, taking Russian help for himself.

He knows he can’t win without it. And we can’t let it happen. https://t.co/10Z2YIipOI

As always happens, the story falls apart after a day or two. Jake Tapper now is tweeting that the original anti-Trump reporting is faulty and wrong.

4/ “It's more that they understand the president is someone they can work with, he's a dealmaker. But not that they prefer him over Sanders or Buttigieg or anyone else. So it may have been mischaracterized by Shelby" at the House Intel briefing last week…

Now WaPo also is reporting that the Russians want Bernie and the Bernie’s campaign was briefed on it weeks ago. Why wasn’t this released at the same time as the Trump news?

The election is being manipulated. It’s not clear the original source of the manipulation, but the manipulation is enabled by a media desperate for scoops and clicks and driven by Trump hatred.

Hey, if Pooty is indeed colluding with Trump, Boys keep on doing it! You two are doing a great job running this wonderful Country!

notamemberofanyorganizedpolicital in reply to Connivin Caniff. | February 22, 2020 at 12:25 pm

I’m starting to love mother Russia more than Bernie does!

RE: “This truly looks like TREASON in all but the narrowest possible sense. If confirmed, it’s utterly devastating. It points to an enemy of the nation sitting in the White House. This cannot stand if we are to survive as a sovereign constitutional republic.”

Devin Nunes: “I Have to Sue To Get Their Lies to Stop”- reacts to reports of Russia trying to help Trump

“If you are not yet furious at the way our elections are being manipulated by and through the mainstream anti-Trump media, then you haven’t been paying attention.”

I am not furious – precisely because I no longer pay any attention whatsoever to the propaganda arm of the Democrat Party. They get none of my attention, and none of my money.

notamemberofanyorganizedpolicital in reply to Aggie. | February 21, 2020 at 9:43 pm

The “media” have been illegally interfering and manipulating for more than 60 years……….

amwick in reply to notamemberofanyorganizedpolicital. | February 22, 2020 at 7:28 am

Excellent point, but doesn’t it just seem more flagrant than ever before? They don’t even pretend to be unbiased.

notamemberofanyorganizedpolicital in reply to amwick. | February 22, 2020 at 8:56 am

You just know they go around bragging about it every night on their drunken binges.

Milhouse in reply to notamemberofanyorganizedpolicital. | February 22, 2020 at 9:39 pm

Hillary must as Lizzie Warren has absolutely zero self awareness.

RE: ‘The other tweet was by the most bitter woman on earth, Hillary Clinton, who referred to Trump as “Putin’s Puppet”…..

The good news is that the media has lied so poorly, so often, that a majority of people do not believe what they say anymore.

There are so many alternative news sources now, and ones that lay out not only facts that they back up, but display the omissions that the propaganda media push to change the narratives.

The media has been exposed as a propaganda network beholden to the DNC and all things leftist. A majority of people are angry for being lied to, and manipulated for politics. Just look at the ratings numbers the big “networks” have, those numbers are pathetic. Heck, comedy shows that push “news” are more believed than these hacks. People who want to know about things are finding they have to go to the original sources, say a speech given, and hear the whole thing because the news media edit and opine which changes the meaning entirely.

The lowering of trust is not going well for them. So, they double and triple down with the same lies. These journalists today are lazy, they are not after the truth, not in any form, but in shaping the narrative for their political agenda. Journalist schools site the main reasons given for why people go to study there is to change the world. Yet, while shining light on hidden facts can change the world, their goal is to shape the world in their image to fit their politics. That is propaganda.

I agree with you, but I don’t understand it. Why are they so luridly over-the-top? This has been going on, literally for years, and it started backfiring immediately. We were talking about this in 2015.

And what, in the name of all that’s holy, is Laurence Tribe doing? He KNOWS better. He has no excuse for this latest blather.

notamemberofanyorganizedpolicital in reply to Valerie. | February 22, 2020 at 10:16 am

What’s different now is they are not in “control.”

We are on to these frauds and they are panicked!

Now let me really tell you what I think of them.

I find myself making this point too often, but can’t resist. Those who are smart in some areas, can be drooling stupid in others. These people, journalists and and alleged intellectuals like Tribe, just are not that bright. They may have high IQ’s but their personality and character flaws make them stupid. Think of it in terms of cars. Sports cars can have great power and actually make turns. Power cars have that power, but can’t make the turn and end up as wrecks on the side of the road. Tribe is a power car. This point is important not because stupid people can’t do damage. They can get you killed as easily as a smart person can. To remain alive, however, you must acknowledge who is smart and who is stupid and treat them differently. The approach that works with the smart person can get you killed with the stupid one. President Trump has recognized this. His predecessors have treated the stupid as if they are smart.

Milhouse in reply to notamemberofanyorganizedpolicital. | February 22, 2020 at 9:43 pm

LOL, Bernie and Russians actually make sense. Bernie also has zero power while Trump does, so while Bernie can grandstand and make claims Trump and the do something branch of government can take actions.

It’s really true this time, those Russkies are up to no good. Trust us.”

Whatever the leaked “news” is out of that briefing, it came directly from Adam Schitts evil, perverted imagination

Of that, I would put money on

The Sander’s briefing that Russia was attempting to aid Sanders was two days before. The Congressional testimony that Russia was NOT aiding Trump was also at approximately at the same time. This is a planted story by Schiff and the NYT to distract that the Russian’s prefer a Democrat.

Sometimes I wish Hillary Clinton would finally just shut up. I know that’s kind of rude and crude, but haven’t I suffered enough?

All Putin has to do to sow discord and distrust in the 2020 election is pretend to back one or the other party. The chaos that ensues will be more than he could manipulate on his own.

All Putin has to do is nothing…the media are willing to give him credit for whatever they think advances their agenda.

That’s more or less what Mueller concluded Putin did in 2016.

There are three purposes for this fake news story.

The first is to establish, the minds of Dems, that the Russians are actually meddling in the election. This is to lend credence to the charge that Sanders is being supported and, possibly, assisted by the Russians.

Second, the same predicate is going to be used to tar Trump as a Russian agent, to hhurt his election chances.

Finally, even with Dem vote fraud, the Dems are pretty sure that none of their candidates can beat Trump in November. So, the stage is being set to claim that Trump was illegally elected due to Russian “meddling”.

Noow, Russia might prefer Trump to a Dem ideologue, as Trump is a known quantity and can be negotiated with. The same was true in 2016, with regard to HRC. The Russians KNEW they could deal with her, in the White House. And, the bulk of the evidence supports the Russians supporting HRC, rather tyhan Trump and actually assisting her campaign in harming Trump [Steele Dossier].

So the “MSM” would have us believe that they, the “MSM” media are all owned by Russia and that Russia is their slave master…….

If we can keep in mind that Lt. Col. Vindman and Eric Ciaramella were Senior intel officials; the veil will drop from our eyes.

But barely any attention is given to our true enemy, China.

Russians knew they could never win a hot war with the USA – as it would have meant MAD – so their commitment has to been to destroy us from within.

Looks like they’re doing a pretty good job as Putin’s living rent-free in so many heads.

notamemberofanyorganizedpolicital in reply to DuxRedux. | February 22, 2020 at 11:05 am

The more the lyin’ Media tells me about Russia and Putin trying to help re-elect President Trump, the more I’m liking Mother Russia!

so….the russians are supposed to make me not vote for someone (clintons) I have detested for multiple decades..
man those russians are some powerful people.

notamemberofanyorganizedpolicital in reply to dmacleo. | February 22, 2020 at 12:19 pm