The coronavirus of halftime shows. 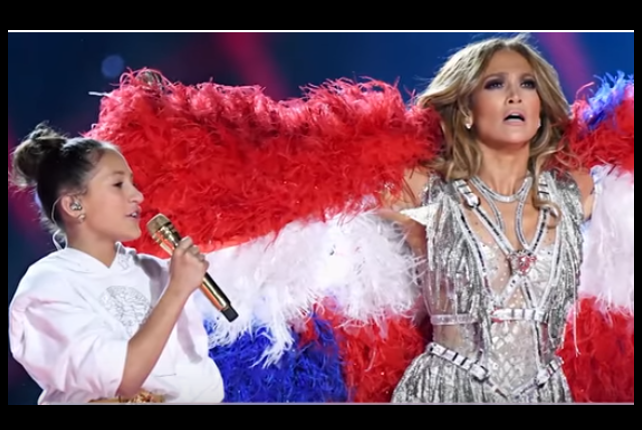 Legal Insurrection readers may recall that Super Bowl 2017’s halftime show featured Lady Gaga, who put on an entertaining, patriotic extravaganza that resulted in a YUGE uptick in her album sales.

Who would have thought hat Lady Gaga’s performance would represent the height of good taste and respect for country? However, it’s 2020, and the year being what it is, I will make the case that 2020’s Super Bowl halftime show will also be remembered for being hot.

A big, hot mess. The coronavirus of halftime shows.

The performances of Shakira and Jennifer Lopez (J Lo) were masterpieces of mixed-message wokeness. What was suppose to be a sexy statement about “female empowerment” devolved into a display more suited to Pure Platinum.

Shakira gamely began dancing and singing to her greatest hits, which was just fine. And while belly-dancing might not be to everyone’s taste, if it had been paired with a set by a classic rock band, then this may have been a worthy presentation.

Shakira’s biggest mistake was getting caught in a close-up with an odd-looking mic, in a suggestive clip that made the rounds on social media.

If I ain’t seen anything ever that’s more meme-worthy, I give you Shakira tongue lol pic.twitter.com/6HcOGBa7Mx

However, it really took off when J Lo took the stage. When the actress/singer slid across the stage exposing most of her assets, many parents hustled the kids out of the room.

But, wait, there was even more female empowerment to behold! Those viewers who remained were treated to a fairly exotic routine using a stripper’s pole!

Yeah if Shakira’s crotch shot wasn’t enough, J Lo is on a stripper pole. Actually got up and left the restaurant I was trying to watch it in. On a ski trip with my kids So I went back to the condo and never turned any of it back on.

One of the biggest messages that progressive women promote in the #MeToo era is that they don’t want to be treated as sex objects. Yet, here are two pop queens doing the very thing for 14 straight minutes during the biggest game of the year. Even Janet Jackson’s “wardrobe malfunction” lasted less than a minute, and the perpetrators had the grace to apologize for the “mistake”.

In addition to all that female empowerment, Americans were also subjected to more virtue signaling on immigration policy! Behold..Latina schoolgirls in cages, singing “Born in the USA”.

Was Obama watching?
He must of been insulted…https://t.co/fQ1GWaIcFX

And while the Puerto Rican flag cape was an interesting touch, I guess I should be grateful J Lo didn’t really try and send an even more provocative message to the millions of Americans by donning a Mexican or Cuban flag.

J Lo pulls out the Puerto Rican/American flag during her performance at the super bowl. #SuperBowl #JLo #JenniferLopez pic.twitter.com/oo4RiDxJYl

The fact that the show was so poorly received is proven by the fact social media mavens are attacking all the criticism.

I, for one, was SHOCKED and APPALLED at the nudity in the Super Bowl halftime show. This was supposed to be a family-friendly event. I didn’t need to see that much skin.

Well, I for one, didn’t want to see Adam Levine half-naked, either.

Now, as I am a fan of capitalism, I would like to give a shout out to the Jeep ad. with Bill Murray reprising his Groundhog’s Day role:

The ad didn’t insult the audience, had a clear message, and was the most entertaining aspect of the Super Bowl LIV…aside from the fact the Kansas City Chiefs beat the San Francisco team.

Chiefs player Frank Clark wore a Kanye/Trump shirt to a press conference saying it was a “very historical moment in our history” pic.twitter.com/1ui2OqujgO

I hope that those planning the 2021 halftime show learn from the Jeep ad: Respect the viewers, keep virtue signaling to a minimum, and hire for talent instead of wokeness.

Why would Jennifer Lopez don a Mexican or Cuban flag?