On the other hand, the Atlanta Falcons were not the only losers. 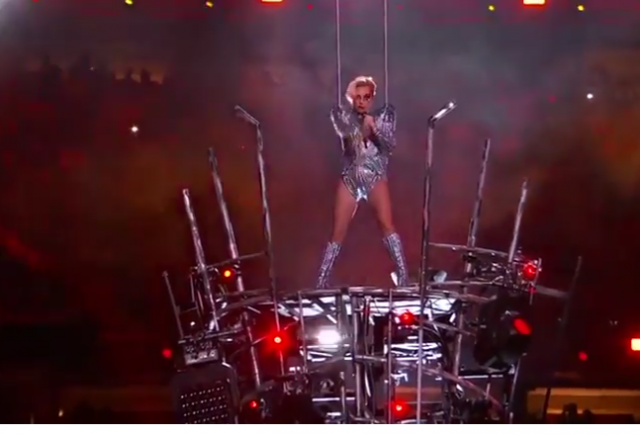 It is hard to say who the biggest winner was Sunday night.

The overtime, comeback victory of the Patriots and its famous quarterback Tom Brady would likely top everyone’s list.

However, in the wake of an entertaining, well-executed performance devoid of blatant politicization, Lady Gaga is probably giving the Patriots a run for their money. Her sales exploded the day after Super Bowl Sunday.

I must admit that I just purchased 5 of her songs, grateful that we weren’t “Streeped“.

On the other hand, there were clear entertainment failures. The Audi commercial, which featured “girl power” in an homage to gender justice, failed to showcase the product.

Instead, the ad’s downbeat message turned off more people than it inspired. It also drew attention to Audi’s own record on gender equality, which is mixed at best. And it highlighted the perils that come with an attempt to hitch a corporate identity to a controversial social issue. The YouTube video of the ad has logged more dislikes (59,000) than likes (47,000). “Some of that [negative reaction] comes from a perception of a manufacturer and seller of products trying to grab an issue and align with it for their own gain,” says Julie Hennessy, a marketing professor at Northwestern’s Kellogg School of Management.

What do I tell my son? Not to buy Audi.

Finally, who was the biggest loser of the night? While the Atlanta Falcons are a leading contender, Lumber 84 dominated with its overtly political and controversial ad.

…Maggie Hardy Magerko, 84 Lumber’s CEO and the daughter of its founder, is having second thoughts after her ad’s “unexpectedly” negative response: The owner of the company insists that she voted for Trump and that the ad was inspired by his campaign chatter about a “big beautiful door” in the border wall, but that reeks of damage control in light of the outcry this spot would surely cause on the right. I’d be mighty curious to know from the Border Patrol how many legal immigrants (on a “journey toward becoming legal American citizens”) whose visas and work permits are in order typically enter the United States by wandering through the desert towards the border instead of showing up at a point of entry and presenting their papers. These two are very obviously illegal immigrants.

This marketing tip is ever-green: Insulting potential customers with your political grand-standing is never a good idea.

AirBnB sent out a mass email after the SB bragging about their ad and signaling their virtue.

I immediately unsubscribed. Like most things, the original idea was great. They have one job. Just STFU & rent places.

Start a commercial with seemingly hesitant travelers all over the world waiting at airports or buses or on ships… tickets in hand and paperwork… passing Lady Liberty.. a tear in their eye…. and then shift to going through customs … and at the end .. a smile from the customs agent saying “Welcome to America … so happy to see you come this way….”

There is “coming to America” and “sneaking in to America”… a big difference missed by the Left.

Thanks for the new word Leslie.

Maybe Ray Stevens can do a parody song of it, say “The Streep.”

Leslie Eastman in reply to notamemberofanyorganizedpolicital. | February 7, 2017 at 5:20 pm

Having your last name become a fun, new verb is rarely a good thing.

You really have to wonder if all the pre-game hype about Lady Gaga going political was part of the marketing plan.

notamemberofanyorganizedpolicital in reply to Neo. | February 7, 2017 at 4:48 pm

In other words, spot on, you know it was all PR hype.

Just like Budweiser’s tearjerker of how Adolphus Busch came to St. Louis…never let the facts get in the way of a fabulous fable.

Maggie Hardy Magerko, 84 Lumber’s CEO should have just said she got too busy to watch over the ad agency properly.

Personally, I like the Alfa Romeo ad that had both boys and girls wanting to “ride the dragon”.

If she will give a spectacular and non-insulting 1/2 time, I’m her newest fan.

Sorry but Gaga did try to streep us.
You may have missed it because it went by quickly at the very beginning. After singing a couple of lines of God Bless America she sang This Land is our Land. Aside from the obvious streeping if you interpret “our” in certain ways, there is the history of the song as being antithetical to God Bless America , as well as the generally omitted lyric about a wall.

notamemberofanyorganizedpolicital in reply to RodFC. | February 7, 2017 at 4:46 pm

That’s more in line with what I would expect from
Grannie-Ga-Ga, and Grannie-Donna………..

Singing an American standard is truly subtle, as it is open to interpretation based on how someone wants to view her performance. She had to choose something to appeal to a wide spectrum of fans with differing political beliefs.

I’d say the opposite. Singing a little bit of both God Bless America and This Land is Our Land together is inspired and is about as “in the middle” politically as you can get. Remember this is an entertainer who has been trying to soften her image by doing duets with Tony Bennett – which earned her a Grammy – so I think the last thing she wanted was any controversy.

One other thing too, Lady Gaga is just 30 years old, which puts her in a completely different generation from entertainers like Madonna and Meryl Streep. Like most young people, she probably has very little interest in being told by other female entertainers in their 50s and 60s what her political views should be.

What I saw with that opening was a ‘right’ wing song (God Bless America), a left wing song (This Land Is My Land) followed by a snippet of the Pledge of Allegiance (One Nation, Under God, indivisible, with Liberty and Justice for all). Followed by the dive in.

Frankly, it was universal, the only ‘politics’ I took away from it was that left, right, we’re all still Americans. I was actually impressed with how she emphasised the ‘Under God’ part as well, that was a very nice touch.

And, of course, later on the shout out to her mom and dad was great too.

You know, I’m in the market for a new car and Audi was on my list for serious consideration. WAS.

Gaga is as political as they come. She performed well, though.

My favorite was the KIA ad with the eco-whacko nut.

Congratulations to the Atlanta Falcons, winners of the Popular Vote for Superbowl LI.

I was really hoping my Patriots would win their 5th, but they just couldn’t overcome the ill will from so much negative press over the past several years.