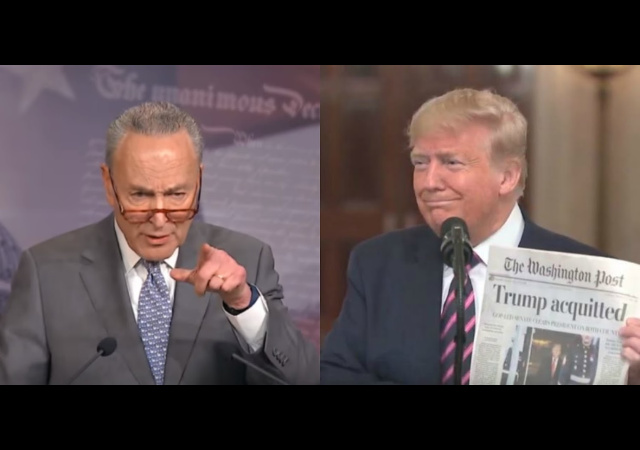 President Donald Trump took to Twitter to continue celebrating his impeachment acquittal by the Senate.

The president made his predictions on Sunday but repeated them this morning.

Trump also noted the high approval rating for the Republican Party and his own personal best job approval.

So good to see that Republicans will be winning the Great State of Alabama Senate Seat back, now that lightweight Senator @DougJones cast a partisan vote for the Impeachment Hoax. Thought his boss, Cryin’ Chuck, would have forced him to vote against the Hoax. A Do Nothing Stiff!

Because of how badly they did with the Impeachment Hoax, AOC will primary Cryin’ Chuck Schumer, and win, and Jerry Nadler has a good chance of losing to his far left primary opponent! It is all getting quite interesting. Pelosi will lose the House, AGAIN! My poll numbers great.

95% Approval Rating in the Republican Party, a Record! 53% overall (plus add 9 points?). Corrupt Democrat politicians have brought me to highest polling numbers ever with the Impeachment Hoax. Thank you Nancy!

Thank you to @mirandadevine of the New York Post for your interesting (and correct) column today. “Trump has gained 20 points since Impeachment began in October. He gets 67% on economy. Nonwhite approval of Trump is also at a high: 28%, up 10 points in a year. Nice one, Nancy.”

I don’t think AOC will primary Schumer or Nadler will lose his primary. I do think Jones will lose his Alabama Senate seat in November if the Republicans do not run Roy Moore.

But Trump has every reason to continue celebrating. The Democrats had a week from hell with the impeachment acquittal and the Iowa caucus fiasco.

Not to mention the fact that despite the impeachment inquiry and vote, Trump’s job approval kept going up.

Trump needs to tout these numbers. I watched C-SPAN during the impeachment trial. The network received a lot of callers on the “not guilty” line. When asked why they feel that way the majority didn’t talk about the articles of impeachment.

The majority of those callers expressed their relief and joy at the strong economy.

People vote with their wallets.

President Trump is the ultimate pitchman – he never stops. Calling him out on it, simply will not work. Trying to beat him at his own game, will not work. The best approach is to take him at his word and demand that he deliver on it – which means legitimating the issues. I really want immigration reform even if it means building that “terrific” wall.

AOC has a huge ego and little thought to go with it. Pumping her ego is bound to cause trouble for Dems.

One of the few things worse than AOC in the House would be AOC in the Senate.

The Old GOP didn’t want to win Alabama. They wanted to hold the Senate BUT with enough RINO’s to guarantee Trump couldn’t do fuck all (well, they fucked that up didn’t they but it was a close run thing!).

I see RINO’s as being the old GOP’s insurance policy to stop a genuine “conservative” from doing anything to drastic like getting America back working again.

To say they are poison is an understatement: they are traitors to their voter, and they are complicit with people who are trying to destroy our freedom.

If the fit hits the shan, GOPe rats are no different an enemy as the loons of swamp/left/islamic axis.

Who’s a RINO? Democrats use that term in an effort to deter Trump supporters from appreciating our friends and allies. Oh, yes, and Barr and Durham are “do-nothings.”

RINOS are ‘way down on my list of problems, when there is a Senate to keep and a House to take.

Have you noticed that Trump hasn’t made a single recess appointment in his 3+ years as President? The reason is that the Republican-held Senate has been continuously playing parliamentary tricks to remain “in session” even when they are on vacation. And they do it by unanimous consent decrees, so every single senator of both parties are complicit. My guess is that they are all dirty, and are working together to ensure that Trump can’t appoint a non-swamp creature to critical positions like Attorney General, NSA, or FBI, in order to keep their own crimes hidden.

Remember when Trump said that he’d appoint Rep. Ratcliffe to head the DNI? He withdrew it within a few days after the Senate Republicans said no.

RINOs have to go. And that includes some folks that I once thought were good guys, like Cruz and Paul. Every single senator is corrupt, and is resisting Trump. Only a few House members can be trusted, like Jim Jordan.

And be cautious of anyone who’s been approved by the Senate, including Mike Pompeo and Bill Barr. Trust but verfiy.

The senate has not been in recess in many years. It established the tradition during the 0bama years of not going into recess so as not to let him make recess appointments. It has continued that tradition for two reasons:

First of all, under the constitution the senate CANNOT adjourn for more than three days without the House’s permission. And of course Pelosi is not about to give permission. So the whole thing is impossible.

Second, even if the house were to give permission, under the senate rules to adjourn requires unanimous consent. To change that rule would require a motion that the Dems could filibuster. But it would be unlikely to get even a majority, because enough R senators would be against breaking the precedent.

Milhouse,
Obama only made a few recess appointments after his 2nd year because the opposition party took over congress for his last 6 years, so of course they obstructed him. The republican had control of both houses for Trump’s first two years and they still blocked him. Like I said, RINOs all around.

As I already wrote and you ignored, during Trump’s first two years the senate could have got the House’s permission to adjourn, but it would still require either unanimous consent or a vote on a motion to adjourn, which (a) the Dems would have filibustered, and (b) would probably have failed because of R senators who would have thought it unfair to suddenly drop what had by then become the senate’s standing practice, just because it was politically convenient. Since the Dems took the House the whole issue became irrelevant because the House will not give permission for an adjournment.

If NYers are STUPID enough to elected Cortez to anything after witnessing her joke of an intellect, a pea of a brain and her malignant ideas, they deserve her.

But we other Americans don’t.

I think that the only reason she was not a Democratic Presidential Candidate was her age. She will be 35 as of Oct, 2024. Hope that doesn’t happen.

I assume you mean her nomination and not her birthday.

Do you think her constituents care whether her IQ is 80 or 180?

And their “week from hell” comes right after other big Trump victories like the signing of the USMCA and China trade deals.

But I’m not tired of winning yet.

Such is the state of TDS in this country that in order to get rid of AOC, Trump should campaign for her right there in her own district. She’d probably beg people not to vote for her just because, well, hate!!!
Then presto, no more AOC. She’s so stupid, she’d probably glory in the whole loss thing.

Jezebel Pelosi is SCREECHING about doing it to the Children Again!!!!!!!

Pelosi: ‘You Gotta Be Ready To Throw A Punch — For The Children’

From the woman that has to prepare paper for ripping.

DEMS’ week shaping up to be WORSE than last week.

The White House has identified and will soon part ways with the “anonymous” official behind a recently released book and a “resistance” focused editorial published in the New York Times, former U.S. attorney Joe diGenova claimed Monday morning.

DiGenova made his claim on WMAL’s “Mornings on the Mall,” but senior White House officials declined to comment on the topic when asked by the Daily Caller.

JusticeDelivered in reply to notamemberofanyorganizedpolicital. | February 10, 2020 at 8:12 pm

This sounds like a nice bit of swamp cleaning. More, much more please.

She wouldn’t stand a chance of beating Schmuckie, but it would take her out of running for re-election to her House seat

And if anybody on this planet knows how to keep people entertained, it’s Donald J. Trump

Roy Moore is the candidate for Alabama Senator. Of course, Trump will be crossing paths with ‘The Turtle’ who engineered Moore’s initial defeat because Moore wouldn’t kiss his ass. I think enough time has gone by now the people of Alabama see what really happened to Moore. He was successfully ‘Kavanaughed’.