Impeachment Verdict: Trump NOT GUILTY on Both Counts

Impeachment Verdict: Trump NOT GUILTY on Both Counts 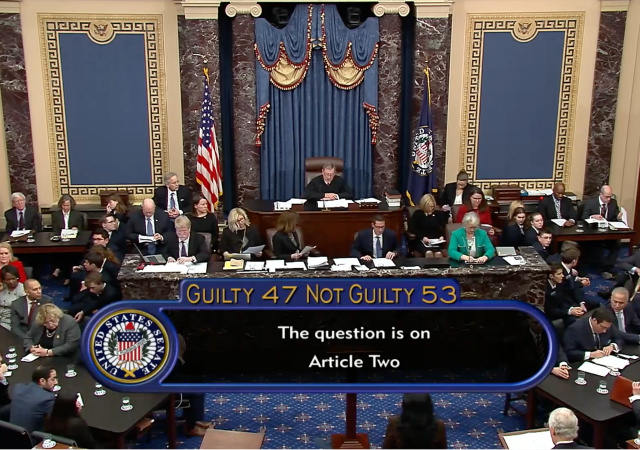 The Senate will vote on two articles of impeachment against President Donald Trump at 4 p.m. ET.

We know Sen. Mitt Romney (R-UT) will vote to convict Trump on the abuse of power charge, but not the obstruction of Congress charge.

As expected, Romney voted yes to abuse of power. He voted no on obstruction of Congress.

Romney is the only one who crossed the aisle. Vulnerable Sen. Doug Jones (D-AL) voted yes on both counts.

I expect all Democrats to vote to convict Trump, including Mittens (D, Utah).

A few Dems have already said they’ll vote against…

The second Romney announced he was going to give their bullshit the ‘bipartisan’ seal of approval their permission to vote against The Party was revoked.

Sinema Jones and Manchin all suddenly made up their minds and announced they were going to convict.

Indeed they did. All but Mittens

Hey Mitt, the 2010s called, they want my vote for you returned.

In the aftermath, watch the press blow right by the “67 votes” requirement and pretend it was actually “close” because it ends up 52 to 48 (or something like that) in favor of acquittal.

Did Romney just vote NOT GUILTY on second charge?

Flinched a little too late…. 50/50. Middle of the Road Mittens….joining white stripes and dead skunks.

It’s just a bullshit screen to try and claim his ‘principles’ required that he vote to convict because this charge was proven.

Even when he’s stabbing somebody in the back he doesn’t have the balls to admit what he’s doing.

I believe, for Manchin’s self-interest, that was a very bad vote.

Gov’nr offered to 2A Va. counties to secede to W.Va.

I believe Manchin has made an error.

Obviously he’s counting on the fact that a different President will be on the ballot when he’s up for re-election in 2024.

Before everyone celebrates, let me remind everybody that this is just the end of act 3. Until people are held accountable for their actions they just change costumes rewrite the script and go to the next act.

They are completely oblivious to the fact that their audience is leaving the theater in mass.

What a week! Romney revealed for the snake that he is, impeachment over, and the Dems in Iowa just found out they blew millions on a deficient app connected to Hillary Rodham Clinton’s ‘Brain Trust’!

Wouldnt a more accurate headline be its Wed and the left is 0-3. The lost Iowa, STOU and impeachment

A Nancy-Boy in more than one meaning of the phrase.

Turtle talked of hope that impeachment fever is abating. I hope not. I want to see Nadler, Schiff, and Pelosi so consumed with TDS that they, in short order, start hearings for Impeachment II. Have another go at it. Put some gas in that clown car and start the engine.

I expect they’ll continue the same arguments they used in the impeachment, but on the campaign trail and with the additional complaint that a “fair trial” was impossible in the Republican-controlled Senate.

It’s a losing hand, but they seem determined to play it.

That Romney fellow sure is a Grade A jackass.

Romney is just a chip off his dad’s block.

And I would say something about Doug Jones, but since Alabama will almost certainly give Jeff Sessions his seat back, there’s no point.

Surprised at Sinema, however you spell her name.

If Doug bucked the party line, he would likely not get DNC $$$ for re-election campaign. Now he’ll get the money, but he’ll still lose the election.

Any money the DNC spends in Alabama will be wasted.

Good. I hope they go all in.

It’s simply outrageous that this transparently contrived and coordinated Dhimmi-crat Hoaxpeachment effort very nearly succeeded. Look at the vote totals. These totalitarian idiots came within a hair’s breadth of pulling this coup off.

Feeble puppet Mueller’s Russia hoax ends in a pathetic whimper, and, no sooner has Mueller slunk off-stage, than, lo and behold, the heroic Hoaxblower arrives from stage left, a partisan saboteur and protégé of the vile Brennan and Rice, proffering the most thinly-supported allegations of alleged wrongdoing, imaginable.

The hoaxblower and his vicious band of saboteurs need to be investigated, posthaste.

That would have to be a pretty unusual hair.
Even Fox simply displayed the vote total, with nothing showing the number required to convict. Casual observers were led to believe that the vote was close.
I agree with the last two paragraphs.

Dear Guy,
Under the Constitution, 2/3 of those present in the Senate have to vote to convict for a prez to be impeached.

So, it was close in terms of simple majority, but not in terms of the 2/3 required to remove.

Sure. I misunderstood the conviction percentage required. But, numbers aside, my point is, it’s absurd and contemptible that this charade got this far. The Hoaxblower’s complaint should have been dismissed by the IG as the transparently partisan sabotage dirty tricks operation that it plainly was.

Look at the vote totals. These totalitarian idiots came within a hair’s breadth of pulling this coup off.

No, they needed a two-thirds vote, which means they lacked about 20 votes.

But we all know, don’t we, that they would have touted a simple majority in their favor as a win — just like they say Hillary won with a majority of the popular vote when the electoral college is what mattered.

All this effing circus to corral 1 Republican vote on 1 count. Absolute joke.

I suspect that a fair number of Democrat members of the House of Representatives whose districts voted for Trump in 2016 will lose their elections in November.
Ditto for Democrat Senators whose states voted for Trump.

This does seem to be a weak point in the Constitution. The President is not supposed to be subservient to Congress, and is not removable at whim. But that’s what the Democrats have been trying to do with impeachment as long as there’s been a Democratic party.

The hoax here is that a great deal of effort has been devoted to faking evidence of something at least resembling a crime, to make mere policy differences masquerade as crimes. And that’s where this plot can be attacked. Were the people who actually fabricated the whole thing to do some prison time, that would make such attempts rarer in future. But without hard time, there’s no down side to one party or the other trying to pervert the system to its own advantage.

If the Rs just play oh well, boys will be boys and Democrats will be Democrats—such scamps, aren’t they cute?—we’ll see this same crap over and over in future. And eventually, whoever has enough Senators will make it work. To stop it, it’s not enough to damage the Democratic party in some abstract sense; the individual actors must be punished for their crimes (but not punished for their politics). But I don’t expect it to happen.

I object to calling this shit a hoax, it was an outright conspiracy to disrupt a legitimate election. Heads need to roll, people need to do time for this, or at least be run into bankruptcy.

The Turtle has been on a roll lately, so I’m not so sure retribution is off the table concerning Willard. Especially if Trump gives his blessing. I have no idea what the usual squishes were promised, but they fell right in line. I won’t be a bit surprised if McConnell stands on Romney’s balls with both feet until penance is served.

Whether or not Trump is reelected history will not forget him. Mitt Romney will not be remembered.

Romney used to seem to upright and decent to me. But then over time he naturally got exposed as a squishy type whose motivation seemed to appear reasonable to media a-holes.
But PDJT completely flushed him out of the bushes. Butt-hurt, now the world sees the ultra-vindictive, narcissist for what he is. The irony is, the vote for removal only serves to leave a stain on himself!
He’s just a petty loser and everyone knows it! Hahahjahaaa!!