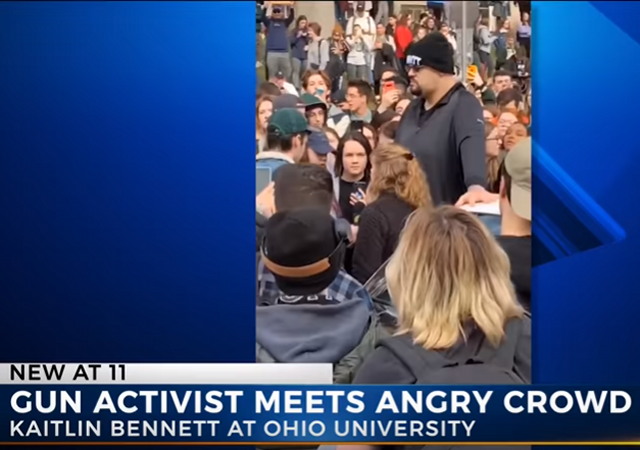 Kaitlin Bennett is a gun rights activist who visited Ohio University this week to complain about the school’s anti-gun policies. All hell broke loose, as she was met by an unruly mob of student protesters.

We published a Quick Take on this story two days ago, but it has blown up and there is more information available now.

Bennett was visiting to advocate for the constitutional rights of all the students there, but they didn’t seem to care. They only seemed concerned with their opposition to guns and the fact that Bennett is a vocal Trump supporter.

Conservative gun-rights activist Kaitlin Bennett, who went viral in 2018 as the “Kent State gun girl,” was confronted by protesters during her visit to Ohio University Monday.

Sharing video of an angry crowd appearing to curse at her and toss a clear liquid into the open window of her truck, Bennett claimed the event amounted to a “riot.” She also called on President Trump to strip federal funding from the university for harboring “terrorists” after she said campus police just “let it happen.”

“This is what happens when a Trump supporter goes to a college campus. Leftists at @ohiou started a riot when @Joelpatrick1776 and I showed up, and the @oupolice let it happen,” Bennett tweeted. “I think @realDonaldTrump should strip funding from universities like this that harbor terrorists.”

Bennett’s first claim to fame came in May 2018 after she posed with an AR-10 rifle immediately following her graduation from Kent State University, about 40 miles south of Cleveland. She wore a white dress, had her gun slung over her shoulder and flashed a graduation cap that read “Come and take it.”

This is what happens when a Trump supporter goes to a college campus. Leftists at @ohiou started a riot when @Joelpatrick1776 and I showed up, and the @oupolice let it happen. I think @realDonaldTrump should strip funding from universities like this that harbor terrorists. pic.twitter.com/5TMlfdto9O

As leftists were pelting me in the head with projectiles, this girl basically told me I deserved it because I’m “in the extreme minority here”. I think @ohiou should know that their students think violence against minorities is okay! pic.twitter.com/2TFqkSdo0Z

Ohio University Police posted this statement, claiming they were not informed ahead of time of Bennett’s visit:

Please see the attached statement regarding a protest incident today on the @ohiou Athens campus. pic.twitter.com/NigbKBf077

Thankfully no one was hurt.

This video report from NBC 4 in Columbus gives you a sense of the size of the mob:

Bennett is apparently planning a return to Ohio University for an open-carry demonstration.

Despite receiving an angry reception from students during a visit to Ohio University on Monday, gun rights activist and social media personality Kaitlin Bennett says she plans to return to the Athens campus…

Several hours after her visit to Athens, Bennett tweeted that she plans to make a return.

“I will absolutely be returning to @ohiou’s campus again, and next time I’ll bring an army of gun owners for an open carry walk through campus. You can’t keep us away and you can’t keep us silent. Just like Donald Trump, we will always win,” she wrote.

I will absolutely be returning to @ohiou‘s campus again, and next time I’ll bring an army of gun owners for an open carry walk through campus. You can’t keep us away and you can’t keep us silent. Just like Donald Trump, we will always win.

It’s almost impossible to imagine a liberal speaker being treated like this on any college campus, but this has become the new normal for conservatives.

This is one of the main reasons taxpayers should not be expected to fund “free” college. Half of America is not even welcome on many campuses.

Why does no one ever point out that these are professional (i.e. paid) protesters? You used to be able to go through the local NoVa newspapers and see the protester gigs and their rates. Animal rights and pro-abortion were the highest paid ones if I recall. College kids don’t show up organically for this crap. They want the money.

You’re correct they use to be listed on craigslist. Not sure if they still are.

And once you get a mob together and give it a nudge in the rightwrong direction, human nature takes over and things will get ugly fast.

All that evil will end when Conceal Carry is the Law of the Entire Land.

Not really. Most of the people who attended CC classes tell me they’re instructed to turn the other cheek and try to leave peacefully. They’re told not to escalate or even look like they’re escalating anything.
If they just draw then they can be looking at legal issues with the lawyer money coming out of their pocket for brandishing. Might not be true, but who would want to go through the hassle of court and paying a lawyer?

It’s probably completely lost on them, that this is a classic example of why we needs guns. The police did nothing even though one could have reasonable fear for their safety.

Until they assault you, you don’t need a gun and after you (maybe) regain consciousness (since you couldn’t call 911) you won’t need one then… so the gun control crowd would say no gun was needed.

Rent a mob won’t do what Antifa will do…. but hard to tell who may be embedded in the rental group using cover.

Somebody is going to get killed at this rate.

And they’ll be quickly forgotten. Martyrdom isn’t what it used to be.

Planned President? Planned Patriots. The mob is Pro-Choice, selective, opportunistic, and oppose the right to self-defense, the right to keep and bear arms, legs, a head, the right to life, liberty, and the pursuit of happiness. Only government agents, bodyguards of the 1%, criminals, and terrorists should enjoy civil rights. #HateLovesAbortion

Hello Police!
If it was “unexpected”, how did the protesters know to show up and what to do? But you didn’t?
What pathetic cowards.

Maybe we should just deny guns to those people in the crowd.

Projectiles?! What projectiles? There’s no mention of them by anyone else, and there are certainly none in the video clips. And without them what exactly did she expect the police to do? By all accounts it seems the protesters were simply exercising their first amendment rights, exactly as she was. So how could the university have stopped them? And for what should they lose funding?

Ohio students have been posting videos of this on tik tok since it happened . They seem to be obsessed with her bowel movements….

Against the public’s right to bear firearms?
At an Ohio university?
How soon we forget why the Second Amendment exists.

“Tin soldiers and Nixon coming,
We’re finally on our own.
This summer I hear the drumming,
Four dead in Ohio.

Gotta get down to it
Soldiers are cutting us down
Should have been gone long ago.
But what if you knew her
And found her dead on the ground
How can you run when you know?

That bodyguard could stop a riot by himself.