Facebook’s response: “Sorry, are you suggesting the President didn’t make those remarks and the Speaker didn’t rip the speech?”

President Trump tweeted a video that shows the most uplifting and heartwarming parts of his SOTU address interwoven with current House Speaker Nancy Pelosi (D-CA) ripping up the speech.

The video is good and gets its point across, a fact apparently not lost on Democrats who are mobilizing to get it removed from social media.

According to reports, Pelosi herself is outraged and has sought help from “House allies” to get Twitter to take down the tweet.

Incredible. Pelosi mobilized House allies to pressure Twitter to take down a video depicting her tearing up the speech after each of the heartwarming stories the President shared at State of the Union.

Dems don’t like the optics of the Speaker tearing up great American triumphs. pic.twitter.com/pNITF9GXV1

House Democrats blasted Twitter and Facebook on Friday for hosting what they called a misleadingly edited video posted by President Donald Trump that features House Speaker Nancy Pelosi ripping up his State of the Union speech.

The incident is the latest test of the companies’ new policies on manipulated media.

The video, posted Thursday, splices in footage of Pelosi’s paper-shredding amid moments in which Trump honored the last surviving Tuskegee Airman, announced the reunion of a service member with his family and praised a fallen soldier, among other parts of Tuesday’s address. Pelosi in fact tore up the document at the end of the speech, an action that prompted fierce attacks from Republicans.

“Hey @Twitter, this video is clearly edited in a way that’s intended to mislead viewers,” Rep. David Cicilline (D-R.I.) tweeted Friday. “You should take it down.”

Rep. Don Beyer (D-Va.) chimed in: “This video is doctored. It has been up, and pinned to the President’s page, for nearly a day. Trump posted it to deceive Americans about @SpeakerPelosi ‘s actions and record.”

Drew Hammill, Pelosi’s deputy chief of staff, also took aim at the companies over the video, tweeting, “The American people know that the President has no qualms about lying to them — but it is a shame to see Twitter and Facebook, sources of news for millions, do the same.” 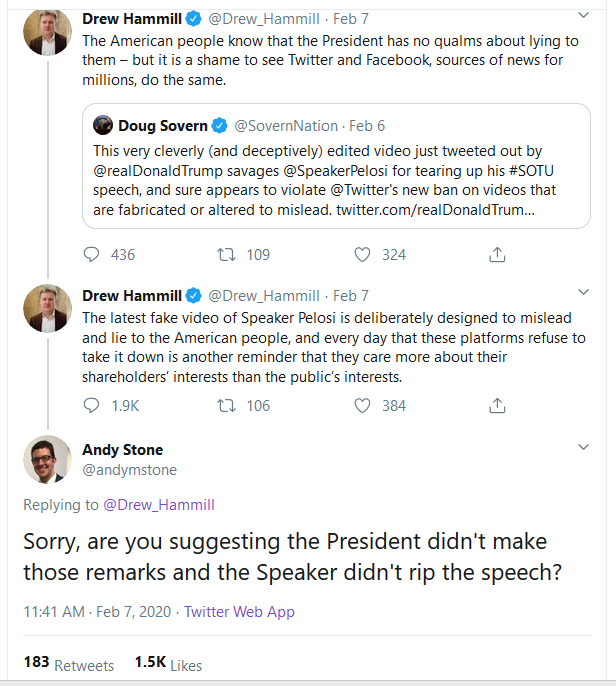 But both companies indicated they will not take action against the video.

“Sorry, are you suggesting the President didn’t make those remarks and the Speaker didn’t rip the speech?” Facebook spokesperson Andy Stone tweeted in response to Hammill.

Stone told POLITICO the video does not violate Facebook’s policies against clips that would “mislead someone into thinking that a subject of the video said words that they did not actually say.”

Twitter spokesperson Katie Rosborough said the company’s new policies against “synthetic and manipulated media” will not take effect until March 5, as previously announced, and the social network will not retroactively review Trump’s tweet or others featuring the video.

For his part, President Trump appears to be enjoying Pelosi’s latest hissy fit because he has “pinned” the tweet to the top of his Twitter profile page. 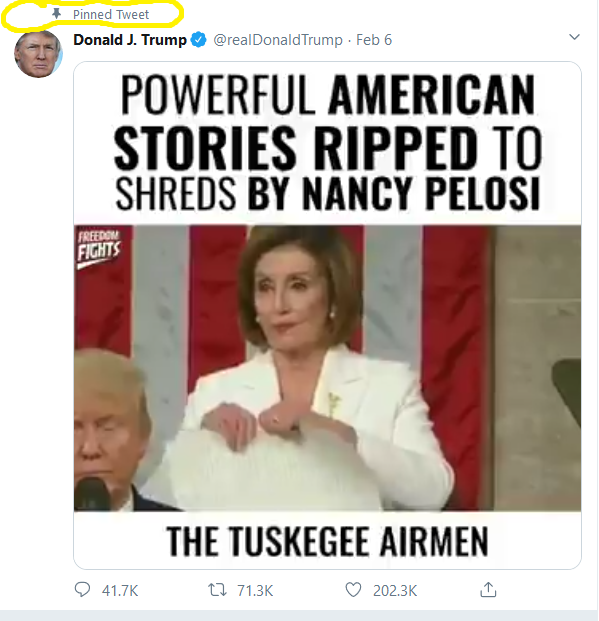 At least they stood firm, for now. Slippery slope…and all that.

They will fold. Count on it.

The problem is, “’internet is forever’ and ‘Barbara Streisand.

To Democrats, the Constitution is unconstitutional.

They are at war with the very concept of Americanism = limiting government to maximize personal liberty.

You’d find this video interesting. Should be shown in every high school yearly and to all voters during the two weeks before a federal election,

The John Birch Society is not an improvement over the Democrats.

Rockefeller Republicans can agree, as can Never Trumpers. Others actually on the right might not agree with the posturing. There are any number of issues where the Birchers are far better than Socialist-Democrats. Of course the Birch reputation is the result of Socialist-Democrat demonization for decades.

I wouldn’t join the Birchers, but neither would I claim they are no better than Socialist-Democrats, Socialists, Communists, Maoists, Fidelistas and assorted other fellow travelers all of the same ilk.

If this video were to be considered “deceptive,” what advertisement would NOT meet that definition?

TY, that is the slippery slope.. Especially campaign ads.

Bloomberg and other Democrats keep showing pictures of children in camps (taken in 2014 when Obama was in control) and keep claiming the pictures show President Trump’s actions. No matter how many times they are caught with this lie.

But that’s not deceptive in their twisted minds.

By the way, I’d love to see the videos of Nancy practicing ripping up the speech in the days prior to the speech. It was so obvious it was a planned action-not a “spontaneous” response.

Nancy pre-planned it by pre-ripping the official State of the Union letter to Congress would be an advantage to Democrats’s politically.

That the Democrats are freaking out over it and trying to get the video of it suppressed means they’ve either done some internal polling or ran it in front of a focus group. Most rank-and-file Democrats are abhorred by it. That video alone, smartly played, would probably flip the House to the Republicans.

It seems to me that Dems are collectively suffering from the Peter Principle.

For younger people on the forum:

“The Peter Principle is an observation that the tendency in most organizational hierarchies, such as that of a corporation, is for every employee to rise in the hierarchy through promotion until they reach a level of respective incompetence.”

I have been amazed at how many young people, including college graduates, are unaware of this.

notamemberofanyorganizedpolicital in reply to JusticeDelivered. | February 8, 2020 at 11:55 pm

Rename it the Pelosi Principle.

All the earlier ones were just practice.

I agree, it has worked out far better than I had hoped. We need much more change in a similar vein.

I agree. I debate myself on whether my 2008 vote for McCain or 2012 vote for Romney was my worst — hard choice.

That was a fake video, I just happen to have the real one handy……….without fakery.

Is Vegas taking odds on Pelosi serving out her term as Speaker subject to a recall?

Democrats are not too smart. By making a big deal out of this they are keeping it in the news. You’d think they would want to be quiet and get it behind them. Trump obviously knows how to push their buttons.

“The Streisand effect is a phenomenon whereby an attempt to hide, remove, or censor a piece of information has the unintended consequence of publicizing the information more widely, usually facilitated by the Internet.”

She really screwed up.

So, when the dumbocrats wail about Trump saying “I can do whatever I want” – which is TOTALLY out of context and the basis of their dictator charge – is that not also deceptive editing? Or does deceptive editing apply only to video footage?

There’s nothing deceptive about this video. It shows the actual context of Pelosi’s action ripping up the speech.

She and the Dem’s might try to say she was only reacting to the other parts of the President’s speech, but that attempt fails when you remember that they also sat on their hands when each and every one of these guests were introduced and their stories told.

You own it, Nancy, and it won’t be forgotten.

Given she said “ I tore it up. I was trying to find one page with truth on it. I couldn’t,”

That excuse from dems doesn’t wash.

What’s making Pelosi and the Democrats delirious with anger? Trump just did something they would do. And FB and Twitter compound the anger by not reflexively doing their bidding. Something seems to have changed.

Or they are worried about being reclassified as a news site and lose their platform protections.

This could be as entertaining and enjoyable as getting a daily fix from reading the Far Side.

Nan the Ripper is a fake video? Am I going to believe the protesting libtard or my own lying eyes?

Nan,don’t do the crime if you and your minions can’t do the time. It was a stupid stunt on your part and now you get to own it.

Nan the Ripper…LOL! Good one.

Her, and the horse she rode in….

Sure it wasn’t a cockroach she was riding?

I thought it was a broom

Dear Speaker Pelosi, You got played 🙂

“ Sorry, are you suggesting the President didn’t make those remarks and the Speaker didn’t rip the speech?”

You know – this has been just a great week. Yep it has!

This is the cherry on top of a banana split and I’m still not tired of winning!

Pelosi is starting to realize that her little performance turned out to be a massive self-own.

Imagine if the House had presented an Official, signed historical government record/document to The White House. Imagine President Donald J. Trump accepts the document on behalf of the White House and American people. He then proceeds to rip it in half. Now imagine the document contained stories of American exceptionalism.

The democrats would scream for more impeachment, or for PDJT to resign. Many Republicans would demand some sort of accountability, and rightly so. I see media experts and lefty lawyers claiming “Naw, that wasn’t illegal.” Really imagine if PDJT had done the same thing. 100% they would claim it was a felony. TDS is real, and nancy pelosi has an incurable case of it.

We conservatives love this stuff, but most people are only dimly aware that it happened, if they even know at all. So we are just preaching to the choir. Still it will part of a lovely montage in the October Campaign ads so perhaps it will be useful then.

Hodge, I think a lot of people WERE watching the SOTU because they wanted to see if Trump was going to crash and burn by using this speech to bludgeon the prosecution. Instead they saw two things: 1) a very Presidential and upbeat speech as 2) the dems acting like immature 3-year olds. Petty. Nasty. Negative. Anti-American.

For some reason the reply buttons are disabled.

I don’t think Pelosi is stupid or incompetent. She is elected by her peers. Not the same as rising in a bureaucracy.

She is in an impossible position. Her party has, for decades, won elections by assembling a coalition of minority interests, and now the contradictory interests are breaking the coalition. Jews, Muslims, and feminists are ripping the seams. Blacks and illegal immigrants have competing interests.

Trump supporters relish the prospect of running against Bernie , because he has clearly stated proposals that can be debated. He is not some groomed mystery guy out of nowhere, like Obama or Buttigieg.

notamemberofanyorganizedpolicital in reply to Petrushka. | February 9, 2020 at 10:52 am

Try to imagine the Phone company terminating your service because they don’t like what you say!

Facebook and Twitter are not the phone company. They regularly remove content they deem offensive or inaccurate. They would have removed this one if they had a problem with it. But they don’t.