Brawl Breaks Out in the Middle of a Bernie Rally

Brawl Breaks Out in the Middle of a Bernie Rally 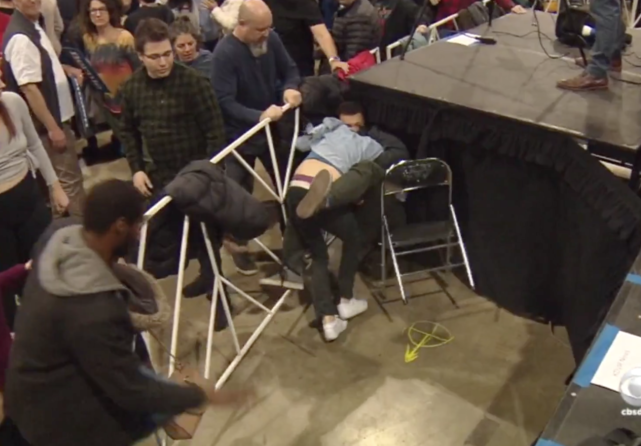 In Denver, two Bernie Bros got into a fist fight in the middle of a rally while Bernie Sanders, Democrat presidential candidate was on stage delivering a speech.

A fight broke out in the middle of the Bernie Sanders rally on Sunday evening at the Colorado Convention Center. The Democratic presidential candidate rallied thousands of supporters in Denver in a campaign stop before the March 3 Colorado primary.

CBS4’s news camera was capturing video of the event when two men began fighting. They pushed through a metal barrier fence in the front row as they grappled with each other and one man knocked the other down onto the ground after lifting him up. They both landed on the ground partially under the stage Sanders was in the middle of delivering his speech from.

Friends of both people quickly intervened and after some more shoving successfully broke up the fight.

It’s not clear what the two men were fighting about. Neither one was escorted out — security instead chose to instruct them to separate from each other in the crowd.

Mmmmkay, we have a what, when and where, but no who, how, and why.

You are too rational with your feet squarely on the ground.

All you need to know is they were exercising their right to Freedom of Feelings at a Bernie rally.

Of course, if I were there, I would exercise my right to feel sick to my stomach and barf over everybody.

Read today it was because one guy was wearing a Black Guns Matter shirt. The other guy took offense I guess.

Shouldn’t Bernie tell them the uniform is either brown or black shirts?

notamemberofanyorganizedpolicital in reply to 2smartforlibs. | February 17, 2020 at 7:05 pm

Also shouldn’t Bernie be telling them to go after the Clintons who are plotting to steal it again from Bernie by using Bloomers?

Fighting over the last hit off the doobie.

Probably a dispute over the fine points of the worker’s control of the means of production. Either that, or who gets dibs on the best of the free stuff.

Look out Milwaukee.Katie bar the door!!!

“A Bolshevik and a Menshevik walk into an auditorium…”

notamemberofanyorganizedpolicital in reply to McGehee. | February 17, 2020 at 7:00 pm

Then Hillary through Bloomberg stole the podium from Bernie AGAIN!

“Gulag”
“Concentration Camp”
“GULAG”
“I SAY WE PUT THEM IN A CONCENTRATION CAMP! YOU NAZI BASTARD”

Bare boobs in Nevada; boobs brawling in Denver–what’s not to like about a Bernie Rally? He doesn’t draw as many people as the Bad Orange Man, but he does seem to offer entertainment.

Are you saying that a 500 mile auto race is not entertainment?? You are a hard one to please.

Based in my personal experiences (many years ago) 2 dirty-footed neo-hippies fighting/shoving is scarcely a “brawl”; not even a decent fist-fight.

Fights ?? Topless women in wet t-shirt contests ?? This is MAGA – not some boring old Trump rally. I think Bernie has a great strategy here and it will payoff big in today’s America.

Violence caused by Trump Tweets! Or, something.

I’m sure they were in a disagreement about wanting differing free sh*t that doesn’t belong to them, but to us. I’m positive many of us would throw down with either one just to keep what we have sweated for ?

And Bernie is oblivious to it

That’s weird, because the other night I went to the fights and a Bernie rally broke out.

Had the same experience, I went to a Trump rally and a NASCAR race broke out!

First part is about Trump at Daytona, Bernie stuff comes after. But yeah, Bernie’s supporters don’t really respect him. When you respect someone you don’t behave in this way towards that person or at an event they are putting on.

Anarchists are not into respect of others…

Naked dairy protesters showing their udders, fights, heckling and small crowds (albeit bigger than the others combined). No free stuff, but fun top be at anyway.
Although Trump rallies are free to attend, it is being reported that hundreds of thousands of dollars have been contributed by the audience and even some that could not get in.

Here’s the correct one: https://www.youtube.com/watch?v=HaBuxCLTMLY&t=0s

But, I thought the Trump supporters were the unruly, violent ones?

The anger and unrestrained outrage by lefties continues to spill out. Right now they’re lashing out at each other. Let’s hope that it’s a brokered convention, so that much of the violence will be directed at the DNC after they cheat Bernie. There will be plenty left over for the GOP and the general election, but hopefully some of it will be spent in Milwaukee.

Lazy people want their free sh*t, no matter what: even if they kill the goose laying the golden eggs.

notamemberofanyorganizedpolicital in reply to TheFineReport.com. | February 17, 2020 at 7:01 pm

Jail these rabid dogs, before they take a bite our of our freedom.

Bernie needs a good marching song to rally the masses. The best one of the 1930’s was already taken.. Die Fahne Hoch…by the other guys.

Hey, now look at this: the organ grinder and his monkey:

notamemberofanyorganizedpolicital in reply to TheFineReport.com. | February 17, 2020 at 7:06 pm

They didn’t throw the brawlers out. Bernie needs all the voters he can get, especially the ones who can throw a punch.

That video was pretty Spartan. I would be surprised if either of those “brawlers” came out anything other than second best to a wet paper bag.

My guess is they were arguing over whether Trump voters should go to re-education camps or just executed.

Even better. They argued over a Black Guns Matter T-shirt.

Not that I care for Comrade Sanders, or, his delusional, jackbooted supporters, but, if he keeps on rising in the polls, I wouldn’t put it past some of his Dhimmi-crat rivals to hire a few “dirty tricks” operatives to infiltrate his rallies and stage fights, in order to sabotage his campaign.

The Dhimmis wrote the book on campaign dirty tricks.

You may remember that Hillary did exactly that.

“Brawl Breaks Out in the Middle of a Bernie Rally” sounds like it needs a punchline. Pun only partially intended.

Looks like a mini-Charlottesville. Tomorrow they’ll be blaming conservatives.

Might not have been a fight. Tell ’em to get a room.

this is why we need to support bernie winning the nomination.

In the good old days guys used to fight over a girl.

Apparently, the black guy was wearing a “black guns matter” tshirt. The white dude in the light blue jacket took offense at that, proceeded to lecture him and call him a racist.

You just can’t make this shit up.

This is just the beginning of the violent attacks by the fascist terrorist group called antifa. They will go berserk when their fascist leader Sanders loses!