Bloomberg 2015 VIDEO: Defends Throwing Minority Kids “Up Against The Wall and Frisk Them”

Bloomberg 2015 VIDEO: Defends Throwing Minority Kids “Up Against The Wall and Frisk Them”

Bloomberg has spent a quarter billion dollars running ads so far and was gaining among black voters at Biden’s expense. Let’s see how this oppo research dump plays out.

The audio clip has the potential to blow apart his campaign.

From Fox News (emphasis mine):

In an audio clip of a 2015 speech, the billionaire gave to the Aspen Institute, Bloomberg acknowledged that “stop and frisk,” targeted minority “kids” who cops must throw “up against the wall” to disarm. The Aspen Times reported at the time that Bloomberg representatives asked the Institute not to distribute footage of his appearance.

“Ninety-five percent of murders- murderers and murder victims fit one M.O. You can just take a description, Xerox it, and pass it out to all the cops,” he said. “They are male, minorities, 16-25. That’s true in New York, that’s true in virtually every city (inaudible). And that’s where the real crime is. You’ve got to get the guns out of the hands of people that are getting killed.”

Bloomberg also said urban crime-fighting required cities to “spend the money” and “put a lot of cops in the streets,” particularly in “minority neighborhoods,” where he said the crime is. He also acknowledged the “unintended consequences” of the policy.

“So one of the unintended consequences is people say, ‘Oh my God, you are arresting kids for marijuana that are all minorities.’ Yes, that’s true. Why? Because we put all the cops in minority neighborhoods,” Bloomberg is heard saying on the recording. “Yes, that’s true. Why do we do it? Because that’s where all the crime is. And the way you get the guns out of the kids’ hands is to throw them up against the wall and frisk them… And then they start… ‘Oh I don’t want to get caught.’ So they don’t bring the gun. They still have a gun, but they leave it at home.”

Stop and frisk allows police to “temporarily detain, question and search civilians or suspects for weapons.”

In 2019, arrests were made in about one of every three stops — with counts of robbery, petit larceny, criminal possession of a weapon and assault accounting for the majority of the charges, the data shows.

Police found around 1,200 weapons — including 415 firearms — in just over 9 percent of stops, according to the report.

Black or Hispanic people accounted for 88 percent of the people stopped last year, according to the data.

Bloomberg has addressed the policy on the campaign trail. He apologized to the Christian Cultural Center in Brooklyn, saying he realizes he was wrong.

He stressed that all he wanted to do was reduce gun violence.

Bloomberg has been gaining among black voters after spending a quarter billion dollars on advertising. That gain came at Biden’s expense. Let’s see how this oppo research dump plays out.

Meanwhile, Trump tweeted the video with the headline that Bloomberg was a “total racist.” But the tweet was taken down quickly. 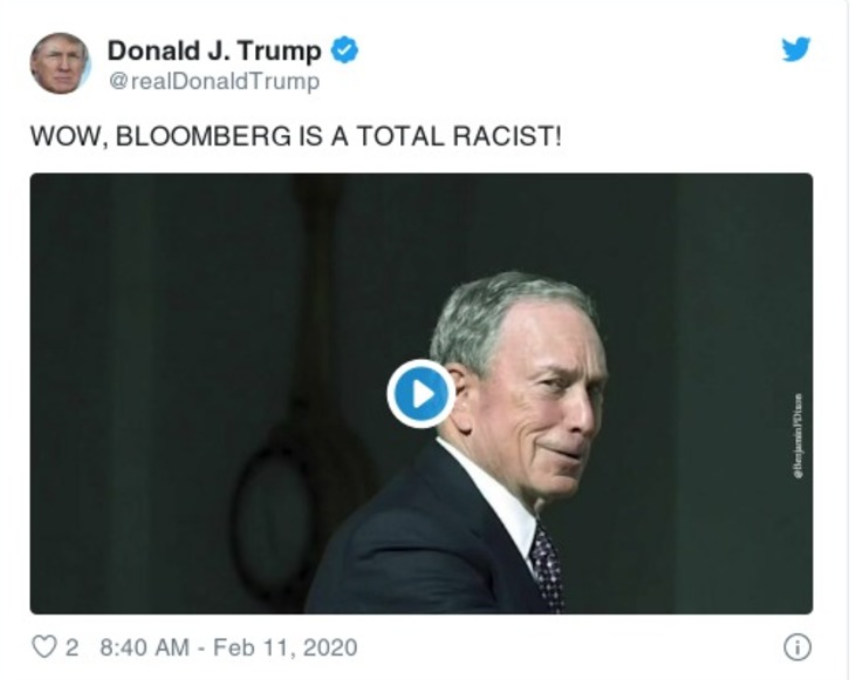 You’ve got to get the guns out of the hands of people that are getting killed.

Of course the bulk of what he said was 100% correct. But here he let his inner tyrant out. Surely what you’ve got to do is get the guns out of the hands of the people who are doing the killing, not the people who are getting killed.

Yes, nearly 100% correct and minorities are unlikely to turn away because they know it’s true. But he’s running under the banner of a party that trucks no deviation from the party line that minorities can do no wrong, except when they do, and then it’s the fault of white people. The party will reject him because they’re mostly a bunch of guilty white people seeking “social justice.”

I immediately noticed that slip, too.

Interesting. By claiming the need get the guns out the hands of would be murder victims, Mini-Mike reveals that he sees the gun, and not the murderer, as the problem. So would M-M please explain why he does not disarm his bodyguard, lest one of their guns leap out of their holsters and kill the former mayor.

from wifi on the Washington Post, “In February 2017, the Post adopted the slogan ‘Democracy Dies in Darkness’ for its masthead. Since 2011, the Post has been running a column called ‘The Fact Checker’ that the Post describes as a ‘truth squad.'”

“The Aspen Times reported at the time that Bloomberg representatives asked the Institute not to distribute footage of his appearance.”

In other words, lets keep the truth about Bloomberg in darkness.

Bloomberg has been gaining among black voters after spending a quarter billion dollars on advertising. That gain came at Biden’s expense. Let’s see how this oppo research dump plays out.

Actually I would expect this to go down well with most black voters, who know very well that everything he said was true, and who are the biggest beneficiaries of his policies, since they’re the main victims of crime.

Concur that many know it’s true. But many (I don’t know just how many) of those are also Republicans (or at least stay away from the Dems).

Some measure of the ones who know it’s true vote Dem despite the Dems never really proposing anything that will actually solve the issue – because “blacks vote Dem”.

I think Bloomie’s portion of the black vote in NYC was substantial, despite the policies. (I can’t find evidence of that, though.)

Actually it won’t go down as well with as many black voters as you think. Quite a few black voters own firearms for protection.

“You’ve got to get the guns out of the hands of people that are getting killed.”

…he meant it. That was precisely his response to the Texas church shooting. He is so dense all he could repeat the idiotic mantra that only the police can have guns, and he was talking about the defenders. So the church shooter should have been able to go safely into a gun-free zone and kill dozens until the police arrive.

I’m thoroughly convinced that to gun grabbers like Bloomberg (and Warren who had the same response, but she’s no longer relevant) the higher the body count the better for them. If citizens can successfully defend themselves from dangerous criminals then there will be more support for the 2nd Amendment. If not, if they render citizens defenseless, then there will be more political support for gun control, gun bans, and gun and ammo confiscations.

He just said what others think.

If New York City were all white, the murder rate would drop by 91 percent, the robbery rate by 81 percent, and the shootings rate by 97 percent.

And we can go to any state or urban locale and come up with very similar data.

Any insights from LI readers as to who made and who took down the original Trump tweets?

Trump does his own tweeting, yes?

I know virtually all politicians have staffers doing it, but Trump seems to do his own.

He does some of his own, but he also has government employees whose job it is to tweet in his name, particularly Dan Scavino. That’s one reason the judge that @realdonaldtrump is now being run as an official government account, and is therefore subject to the first amendment.

Of course what he said was mostly true, although as Milhouse points out his little inner tyrant shows with the language slip-up re: victims being disarmed.

What Trump understands here is that when fighting the Dims you must make them live up to their own set of rules. This is about sowing dissension among their ranks. Nothing more, nothing less.

Bloomberg actually told the truth…I don’t fault him for that (but only that).

His solution to crime is disarm everyone not part of his elite status. While his facts are correct, his goal would jeopardize the innocent and leave us to the whims of tyrannical government. His is the nanny-state with fangs and claws. He is channeling his “inner (French/German) corporal” .

Disarming the innocent would also lead to skyrocketing rates of robbery, assault, rape, etc. Guns are a great equalizer for the old, the weak and the meek. Take them away and the thugs will rule.

This little Napoleon is like many Leftists, and about control. Big Gulps, guns, salt shakers, he wants to control them and you. He knows how to live your life better than you.

Right now, in the entry primaries, the DNC priority is ‘Never Bernie’; and toward that end Pete Buttigieg is the tool. However, in the background the DNC Club is positioning Bloomberg to save the day, and that is becoming visible in new national polling….

Mike and Greta’s new Netflix show “Up Against the Wall.”

Audio was put out by Benjamin Dixon on his podcast from what I can tell. He’s a big bernie booster.
He also put up the audio of bloomberg saying it was ok to tax the poor (sugary things and other stuff) to make them change their buying and eating habits so that they could live longer. He had no problem making them poorer in a really bizarre theory they’d get past their (maybe) GED degree and learn nutrition.
Fascism is blooming all around the democrat gardens.

Most of what Bloomberg is saying is basic facts.

Of course, basic facts are anathema to liberal ideology and that’s what’s really going to hurt him here.

On the policy, the issue I’ve always had with “stop and frisk” was its use without reasonable suspicion.

If the police are actively looking for someone in a particular area because of a crime that’s been reported, and stop someone matching the description – that’s what’s supposed to happen (say, in the case of Michael Brown in Ferguson – not only fit the description, but was in fact that perpetrator being sought). But, if you’re just doing it randomly – that should never happen. Particularly so if its policy that those random stops should happen frequently – as was the case in NY City.

Stop and frisk was never used without reasonable suspicion. But reasonable suspicion is not usually enough to justify a search — for that you usually need probable cause. But stop & frisk means that police use their reasonable suspicion to stop the person and question him, and then they use the stop as a pretext to frisk him incidentally to the stop, relying on Terry and similar rulings that allow such searches, ostensibly in the name of officer safety.

Jeb Bush spent over 100 million and got three delegates or per cent or three something so mini mike must have 6 or 7 somethings by now.

CNN is attacking the person who posted the clip of Michael Bloomberg defending racial harassment as a method of gun control by questioning her motives. Not challenging the facts, which cannot be challenged, but questioning the motives behind what was once called… Journalism. – Ace of Spades