Biden in South Carolina: ‘I’m a Democratic Candidate for the United States Senate’

Biden in South Carolina: ‘I’m a Democratic Candidate for the United States Senate’

“Look me over. If you like what you see, help out. If not, vote for the other Biden. Give me a look though, okay?” 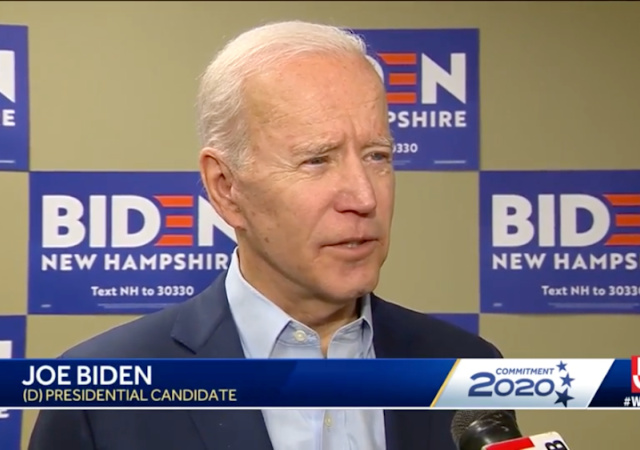 He told a crowd in South Carolina he’s a candidate for the Senate.

Biden was one of several 2020 hopefuls to attend the South Carolina Democrat Party’s First in the South Dinner, where he reportedly received the longest ovation of any of his competitors.

However, wrapping up his remarks, he misspoke about which office he was seeking.

“You’re the ones who sent Barack Obama the presidency. And I have a simple proposition here: I’m here to ask you for your help,” Biden pleaded to Democratic voters. “Where I come from, you don’t go very far unless you ask. My name’s Joe Biden. I’m a Democratic candidate for the United State’s Senate. Look me over. If you like what you see, help out. If not, vote for the other Biden. Give me a look though, okay?”

This is so sad.

Here @JoeBiden says to the crowd in South Carolina that he is “running for the United States Senate” and that if they don’t like him they can “vote for the other Biden.”

I honestly wish he would’ve retired & not subjected himself to the rigors of this campaign. pic.twitter.com/mygFnsrdjC

Biden has put his hopes on South Carolina after dismal results in Iowa, New Hampshire, and Nevada.

Biden had a few other gaffes this week:

The first claim is unverified and Biden has never said that before. His son Beau served as Delaware Attorney General from 2007-2015.

He was probably riffing on an old stump speech from 15-20 years ago. It’s just sad to see someone clearly suffering from the ravages of old age.

When he said “vote for the other Biden” I’m sure he was thinking of his good son, Beau, who died 5 years ago. And if he actually thinks that Beau is running with him and talking to him, that makes this entire episode particularly sad, even pathetic.

When Ronald Reagan left office in 1989 it was said it was his final year in office that his wife Nancy ran “flak” for him as he was showing early dementia. Four years later, 1994, his wife released a public statement that Pres. Reagan had Alzheimer’s. I believe this is what is going on here with Biden. Some of the “tells” on my own Mother were intermittent confusion of places, time, family members and the inability to find appropriate words to use on a regular conversation. She enjoyed relatively good health up to late stage Alzheimer’s which took her body. It’s one of worst diseases as there is no cure and it’s progression is so slow with little to no quality of life other than to care for the shell of the person you loved.

They replaced Gropin’ Joe’s brain with a Rolodex years ago
full of old clichés, stories and wisecracks from his past

Now, the pages are torn, tabs are missing and some are stuck together

He just gives it a spin, and whatever it lands on is what he spouts

I wonder if he still has a driver’s license. And if his family has taken the car keys away.

Even senate he’s no longer qualified for.

I went from laughing at joe to feeling sorry for him, back to laughing… now I’m sad again. C’mon man, time to call it.

Joe doesn’t see it. It’s part of the natural response people who do have it; Denial. Because it’s earliest signs come and go. Time and the progression of the disease forces ones self to reconcile to it. Then only because out of necessity for the help they require. If his son Hunter were a son at all, he would be the first to notice it and should encourage his Dad to get tested and start medicine protocols which can help.

Hey, look him over!

So much is invested in his candidacy now as desperation sets in about Bernie and Bloomberg. A vote for Joe is really a vote for a brokered convention and so Joe will have to stay in the race. The mainstream dems need Bloomberg’s money to counter the hard Left’s money for now. The battle is to avoid a hard left sweep and usher in the final candidate (who isn’t running right now).

Slow Joe has really went ’round the corner. Don’t let him alone with sharp objects or car keys. Let’s hope he can still enjoy his golden years, and maybe even remember some of them.

Joe Biden for Senate! We’ll need his vote when Nixon is impeached!

No doubt the “Senate” contest is between him and Brutus?

H.L. Menchen said “On some great and glorious day the plain folks of the land will reach their heart’s desire at last, and the White House will be adorned by a downright moron.” Joe fills the bill.

The democrats abandoned plain folks when they uttered the word deplorables.

lot of comments and (supposed) reasons for the senate and china and mandela gaffes but I have seen nothing about the other biden phrasing.

I suspect he was never really running for president. This is just a variation on wandering the neighborhood in his robe and slippers, calling for the dog he had when he was 10.

I was hoping he’d break out in tune:

He’s done. Age and the rigors of his campaign are taking a toll, apparently in increasingly large chunks. I almost feel sorry for the guy. Almost.

Joe is marching to the beat of his own trombone.

That would be the “sad trombone”.

As I’ve said before, Joe’s family and friends need to get together and stage an intervention. And perhaps they could persuade Joe to withdraw from the campaign with a little respect and dignity left. That would be the merciful thing for Joe.

It’s like when we had to take Grampa’s car keys away, after about the 30th time he backed into someone else’s car. His neck had gotten stiff and he didn’t feel like turning his head anymore, so he was just backing up until he felt a “bump”, and then he would take off.

The dementia is strong in this one.
He doesn’t know what state he is in. Doesn’t know a Chinese official he “worked with on the Paris Accord” has been dead for over 20 years, wants you to vote for him or the other Biden (split personality disorder?)
Biden is even more unhealthy than Hillary Clinton, but I think he is trying to out do dementia levels that Pelosi is showing.
Just more proof Biden is losing his mind. Literally.

Okay, I’m gonna throw this out there…

How well will this kind of behavior work to protect him from any future convictions?

I’m not one to hold a grudge. But I thought Biden was an ******* since he orchestrated the Clarence Thomas confirmation hearings. So while I didn’t wish this public humiliation on him, I’m enjoying it.