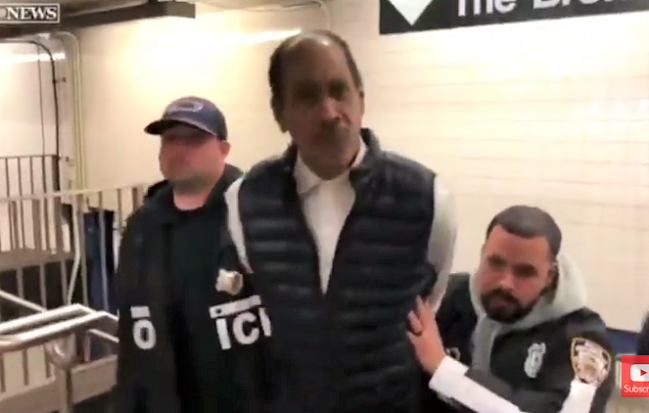 So happy, in fact, that he bragged to reporters as he was being hauled off by police that bail reform is “lit” and that he can’t be stopped from taking “$200, $300 a day of your money, cracker!”.

Charles Barry, 56, has been arrested six times since the start of this year. He’s been released each time without having to post bail under New York’s new bail reform law since his alleged offenses were nonviolent, the New York Daily News reported. In the past, Barry’s served several stints in state prison and has a lengthy record, including six felonies, 87 misdemeanors and 21 missed court hearings, the newspaper reported, citing court records.

“Bail reform, it’s lit!” Barry yelled to reporters Thursday outside the NYPD Transit District 1 headquarters in the Columbus Circle station before officers transported him to Manhattan Central Booking. “It’s the Democrats! The Democrats know me and the Republicans fear me. You can’t touch me! I can’t be stopped!”

The alleged serial robber, Charles Barry, seemed quite gleeful as he was released from custody and waxed poetic about the new law.

Serial subway crook Charles Barry walked out of Manhattan Criminal Court early Saturday after his arraignment in his most recent arrest on Thursday afternoon.

He knew that except for having to spend about 36 hours in police custody, there were no immediate consequences to his alleged crimes, which include charges he snatched cash from people trying to use MetroCard machines.

“I’m famous! I take $200, $300 a day of your money, cracker! You can’t stop me!” Barry yelled to a Daily News reporter late Thursday night as police led him out of NYPD Transit District 1 headquarters in the Columbus Circle station.

. . . . When he was finally released after his hearing early Saturday, Barry was still enthusiastic about Albany’s decision last year to eliminate bail for nonviolent crimes.

“It’s a great thing. It’s a beautiful thing,” he said. “They punk’ed people out for bull–t crimes.”

I’ll leave you with this from the Legal Aid Society:

Mr. Barry’s case underscores the need for economic stability and meaningful social services, not a need to roll back bail reform,” the society said in a statement. “Locking up Mr. Barry on unaffordable bail or worse, remanding without bail, ultimately does nothing to protect the public and fails entirely to address his actual needs.”

“Locking up Mr. Barry on unaffordable bail or worse, remanding without bail, ultimately does nothing to protect the public”

The speaker for the Legal Aid Society should have his mouth washed out with soap.

You would prefer if Legal Aid continued their war against people who do honest work without the mask slip?

This chaos is all part of the leftist plan.

“Bail Reform” would not be a problem if the good people were allowed to carry in NY.

Locking up Mr. Barry on unaffordable bail or worse, remanding without bail, ultimately does nothing to protect the public and fails entirely to address his actual needs.

His actual need is to get a job and earn his keep. His long record is not the fault of society; it is his own. If the only thing open to him is pushing a broom somewhere, then so be it. That is not my problem or the problem of “society”.

N.Y. politicians may want to rethink this. Even if we grant good intentions to the architects of this, surely they must see that a judge needs the discretion to order no bail for an individual on his sixth arrest since January 1st, or nearly once a week? If the politicians choose not to recognize how bad this will potentially be then they shouldn’t be surprised when vigilantes arrive.

1. New York politicians never think, let alone rethink. Leftist catechism is all they need, with no interference from reality.

2. Their intentions are to destroy anything that is good and worthwhile in converting it to a Marxist dictatorship.

THERE ARE NO MODERATE DEMOCRATS. They all are or support the enemies of country.

I think we are expressing the same idea in different terms; that most d politicians are able to learn from policy mistakes but they are almost always unwilling to do so.

“Mr. Barry’s case underscores the need for economic stability and meaningful social services, not a need to roll back bail reform,”

Bull feathers. It demonstrates a need for a citizen to step up and put a bullet between his eyes.

In SoCal a transient (homeless) walked into Vons, put 5 bottles of booze in his backpack and walked out. As long as it’s under the arrest threshold…nothing is done. Steal a car less than $15k….not grand theft. Stores are closing from homeless around stores stealing and intimidating shoppers. It’s just a new cost of living adjustment in the urine colored state. The average person can’t use “street justice” on the ones who really cause this….The politicians.
Taking the “civil” out of society ruins it for everyone.

I can’t imagine how frustrating and perhaps even terrifying it is to be a cop in NYC these days.

Why do they even arrest Mr. Barry if he will simply be let out within hours?

Let’s see if we can understand why people are fleeing New York in droves.
Let’s just use this criminal as an an example. By his own statement he steals 200 to 300 dollars a day. In a year that figures to approximately 91,250 dollars. Lets subtract 10% (assuming he’s either locked up or otherwise occupied) that still leaves 82,125 dollars. Let us assume that he uses a public defender when he is arrested and add in the cost of his short term incarceration. That easily adds up to a quarter of a million dollars either stolen from the the people directly or from the taxpayers. For one individual.
My numbers are of course are only valid assuming facts not in the public domain. Still take that one individual and multiple by the number of people arrested for nonviolent snatch and grab thefts in New York city alone.

Maybe the Feds will get him on tax evasion, like they did with Capone. Unless an audit of his last few tax returns shows that he’s been a good, honest taxpayer.

The citizens of NYC and NYS voted the bozos into power who crafted this nonsense. These voters are now reaping what they have sown. I have no sympathy for them.

But in fleeing they carry the rot of progism with them only to repeat the decline somewhere else. Locusts in Africa, progs in America.

“Locking up Mr. Barry on unaffordable bail or worse, remanding without bail, ultimately does nothing to protect the public and fails entirely to address his actual needs.”

A manifestly entirely false statement, including “and” and “the”. (1) Locking up the criminal Barry (note even the LAS admits he’s a criminal) does indeed protect the public during the time Barry is locked up, and puts it at no greater risk if and when Barry is eventually released after trial and/or serving his time.

(2) Mr. Barry’s thieving deeds eclipse his “actual needs.” The public has a right to be actually protected from such criminality. The LAS assumption that law-abiding society has no choice but to suffer Mr. Barry’s reign of thievery until the bright day of universal peace, happiness and unicorns is entirely their own misguided judgment call, not a fact.

(3) Moreover, what are Mr. Barry’s “actual needs”? He certainly did not look underfed or ill-clothed. He is self-admittedly aware of his surroundings, current events, and the criminality of his behavior. He’s clearly intelligent enough to perform a great many jobs that would pay a decent wage. Unlike Jean Valjean, he does not need to steal to survive. He simply chooses a different lifestyle. A criminal one. And why not? He suffers no consequences for it, so long as he remains “nonviolent,” which he is clearly smart enough to do.

“Mr. Barry’s case underscores the need for economic stability and meaningful social services, not a need to roll back bail reform,” the society said in a statement. “Locking up Mr. Barry on unaffordable bail or worse, remanding without bail, ultimately does nothing to protect the public and fails entirely to address his actual needs.”

It is like these people live in some sort of strange alternate universe where everything is the opposite of reality.

Get stay out of jail free card is best entitlement Libby pol can give himself or a constituent. Even if such results in big murder mugging mayhem increases the benefits to the urban citizen far exceed the negs.

Sadly, when vigilantism returns, these same people that supported these dumb laws will be flabbergasted by its inevitable results.

the long-term solution is changing the law by legislative means

until then, these career bastards need to start succombing to slip and falls, jay walking, falling objects, etc and good riddance

Pushed into an incoming train or onto the third rail

the lawyer jokes write themselves due to the statements from legal aid society.

The bail law is something out of a Batman movie script.

Plaster his mug everywhere. All over the news and on posters in the subway stations. I hope he tries to steal from the wrong person and gets a cap in his ass. He obviously has no remorse and thus has no place in our society.

The Legal Aid Society spokesman is full of shit.

I have noticed that just about every homeless person has a brand new nice tent thanks to prop 47 which allows people to steal up to $960 almost without consequences. Prop 47 makes personal drug use a misdemeanor, even for crack, heroin, and meth.

Study: Most journalists are to the left of Bernie Sanders