“Nobody needs another pink hat.” 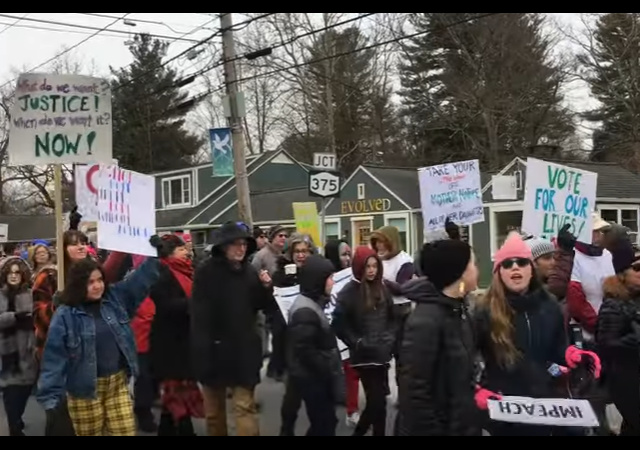 As the media focused its attention on the Virginia Second Amendment support rally, hoping to gin up anxiety and ratings, substantially less attention was given to the fourth anniversary of the Women’s March.

A review of the reports indicates the 2020 rallies had smaller crowds, few celebrities, and a lack of drama.

For example, the Washington DC event drew only 10,000 participants.

This year’s anti-Trump demonstration drew a significantly smaller crowd than in 2017 when crowds overwhelmed parts of downtown Washington and high-profile activists like Madonna and Gloria Steinem addressed the marchers.

The permit filed with the National Park Service for this year’s march, by comparison, allowed up for up to 10,000 people.

Protesters like Becky Halbe, who used to work at the U.S. Fish and Wildlife Service, said she didn’t feel phased by the lower turnout.

“The energy is still there. We can’t give up — this is important to show that we do care,” she said.

Just to put this in perspective: 10,000 the crowd at a typical rally for President Donald Trump in one of his bigger venues….and there is still an audience for overflow viewing areas as well.

“Experts” indicate that the rally is a victim of its own success.

Experts who follow protest movements said the group’s own successes — putting more women on the front line of American politics, inspiring a new wave of progressive groups, encouraging an unprecedented number of women to run for office — have rendered the Women’s March increasingly irrelevant. Others blame the failures on an organization that has struggled to find its purpose amid national controversies, financial mismanagement, accusations of anti-Semitism and a reputation for being unwilling to play nice with others.

Either way, the result is the same.

“Right after the election, it made sense for them to have this big march on Washington, but right now, nobody really wants another march on Washington,” said Dana R. Fisher, a University of Maryland professor who studies protest movements. “Nobody needs another pink hat.”

A more logical explanation is that Trump’s many successes, coupled with the fact that all the doom and gloom predictions about his presidency have been shown to be completely ludicrous, have made the march irrelevant.

For example, for only the second time in the history of the US, there are more women in the workforce than men.

Job growth over the holiday period saw US employers add just 145,000 jobs. However, 95% of those jobs went to women and pushed them over 50% of the workforce.

“I feel very strongly that a year from now, their share will continue to be over 50%,” Betsey Stevenson, a University of Michigan economist who served in the Obama administration, told NPR.

Labor Department data showed that women held 50.04% of jobs in December, bringing their share of the workforce to 76.2 million.

The only time it happened before was during the Great Recession from June 2009 to April 2010, the worst economic downturn in US history, when a tsunami wave of layoffs hit male manufacturing workers most, temporarily giving women an edge in the workplace. The period was known as the Mancession.

For your entertainment, here are a few images from the rallies this weekend:

From the Woodstock Women’s March:

The singing of their special anti-patriarchy anthem:

‘The patriarchy is our judge that imprisons us at birth.’ — Protesters gathered to perform the global feminist anthem ‘A Rapist in Your Path’ during the 2020 Women’s March in Washington, D.C.. The song was first written and performed during national protests in Chile last year. pic.twitter.com/MlkZZIcpLj

A baby Trump balloon was featured part of at least one event:

Thousands of women marched through Washington DC on Saturday at a women’s march opposing US President Donald Trump.

Many protesters said they were horrified at the prospect of Trump winning the upcoming November presidential election. pic.twitter.com/EgCfvtSqUL

The Women’s March is not a march for women. It is strictly for Democrats with TDS. Seriously, I get their emails. They don’t have anything to do with any women’s issues.

No, it’s not just for Democrats. It’s also for commies…and terrorists…and islamo-fascists. It’s a Big Tent, don’t you see. /sarcasm

Hope that big tent remembered to celebrate this.

“….a male to female transgender athlete who is dominating her sport and who twice broke an opponent’s skull has been named the bravest athlete in history….”

Don Trump Jr. was stunned by the news saying:

“More insanity. Where are the feminists? A biological male fractures the scull of an incredible female athlete in a women’s sporting event & is named “bravest athlete in history.”

“Identify how you want but this does a huge disservice to female athletes.”
https://newsthud.com/biological-male-who-broke-womans-skull-in-mma-fight-named-bravest-athlete-in-history/

I believe that everyone should be judged based on their innate ability and demonstrated willingness to work to achieve their potential, regardless of gender or race.

No one should be cut slack based on gender or race. Perform or shut the hell up.

When any group is “cut slack based on gender or race” they become legally superior to the group not cut any slack.

This is a violation of the Equal Rights Amendment.

I think they all just need to eat a Snickers bar.

notamemberofanyorganizedpolicital in reply to rochf. | January 21, 2020 at 2:57 pm

Methinks most have already eaten a Snickers Bar Factory……

hard to get a lot of time off from a job you just started.

Maybe, maybe 100 people in Lansing, Michigan. From the pictures there were no women under 60. No bra burning, thank God!

Did the Democrat governor of NJ start un-announced bridge repairs to stop all the wymnyn from attending?