Virginia Pro-2nd Amendment Protest Was Peaceful, Despite Hysterical Predictions by Democrats and Media

Virginia Pro-2nd Amendment Protest Was Peaceful, Despite Hysterical Predictions by Democrats and Media 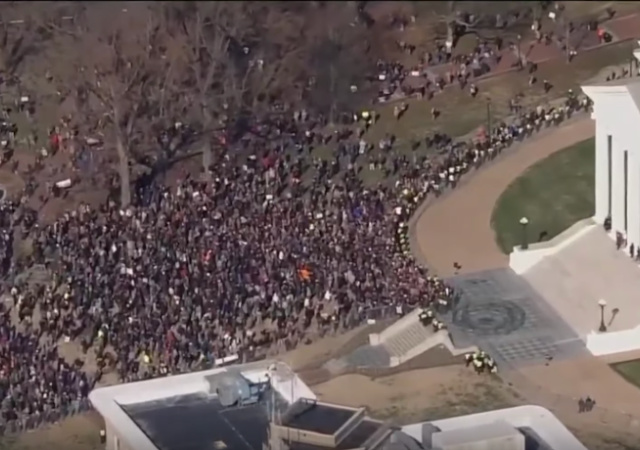 The left and media scared us for days about today’s rally in Richmond, VA. They believed so many people who support the Second Amendment in one place would lead to death, destruction, and mayhem.

I mean, Democratic Gov. Ralph Northam declared a temporary state of emergency ahead of the rally.

Well, over 22,000 people attended the rally. It was peaceful with no arrests. State of emergency, eh?

Imagine that. Over 22,0000 people with guns and not one shooting or crime. Hhhmmm..it’s almost as if these passionate gun supporters care about laws and other people, unlike criminals.

The supporters protested against new gun regulations by the Virginia legislation. This includes “universal background checks, a ban on military-style rifles and a bill that would allow authorities to temporarily take guns from people deemed dangerous to themselves or others.”

The protestors believe these regulations will cause the Democratic-controlled legislation to pass more regulations.

Bill Hayden, a man at the rally, said that no one would ever “get the criminals to turn in their weapons.” He insisted that is why people attended the rally. He wants the government to concentrate on the criminals, not the law-abiding citizens:

#NEW MONTAGE from me showing how @CNN and @MSNBC spent their mornings hyping fears that “white nationalists” and “extremists” would cause “violence” at #VirginiaRally for the #2A like in 2017 at Charlottesville #LobbyDay2020 pic.twitter.com/wR91mMPfmR

This group came all the way from New Jersey for this. They say it is more than just a gun rights rally for them, but a human rights rally. @CBS6 #Virginia #2A #LobbyDay pic.twitter.com/Kwdvr9MTo8

The line getting out is way longer than getting in. Take a look at the massive crowd @NBC12 pic.twitter.com/QEV6Rce0zr

An aerial view of the pro-gun rally at the State Capitol about 30 minutes ago. There seems to be more people in the streets than on Capitol grounds. #VAnews #NBC12 pic.twitter.com/HnrQtDgGmd

More pictures of people carrying rifles at the #VirginiaRally and more evidence that debunks the narrative that the rally is filled with racists and white supremacists. pic.twitter.com/V0jGLpKW2d

An attendee at the rally in Richmond Virginia dispels the media smears against rally-goers.

He says the media is mischaracterizing them, & that they are just law abiding citizens who want to advocate for their constitutional rights.#VirginiaRally
pic.twitter.com/Vp3bJX8eNi

One of the best signs I’ve seen all day #VirginiaRally pic.twitter.com/5VzJLuMIzN

Representation for the gay community is also in attendance at the 2nd amendment rally in Richmond, Virginia.

Look at the size of this pro-gun crowd.

The media claimed thousands of white nationalists would be here.

In reality, one Nazi Holocaust denier showed up and was quickly shut down by the #VirginiaRally attendees.

There was no violence all day. Just peaceful protest. pic.twitter.com/6euSNADKSY

Black Panthers at the #Richmond2ARally

Gun rights activists scrapping stickers off the road to clean up after themselves.

Agitator tried to stir up the crowd at the #VirginiaRally by suggesting violence but the crowd wasn’t having it. pic.twitter.com/SUh1C3fO6l

Some of the “White Supremacists” at today’s #VirginiaRally in support of the Second Amendment. pic.twitter.com/yJVyNjWbss

The Washington Post admitted it, too, when a person told the publication, “It was the opposite of what they expected, and what they wanted.”

WaPo even noted how people picked up trash as they left the rally.

Can we send him to the NYT.

Heck the NYT should be forced to have him on their managing board of directors!!!!!!!!!

RE: “An African-American man waving a Trump flag jokingly tells the crowd: I am Gov. Ralph Northam and I am in blackface today.”

Morning Sunshine in reply to notamemberofanyorganizedpolicital. | January 20, 2020 at 7:06 pm

my favorite snippet of the day, for sure

healthguyfsu in reply to notamemberofanyorganizedpolicital. | January 20, 2020 at 10:08 pm

I’m pretty sure they just endorsed him for Attorney General 2020.

No Antifa = no violence.

notamemberofanyorganizedpolicital in reply to TX-rifraph. | January 20, 2020 at 5:57 pm

However Ace of Spades did report this. Don’t know.

” Meanwhile, someone suspected of being an antifa infiltrator did try to provoke law-abiding gun owners to start “hopping the fence and killing people.”

The agitator denied that he was trying to stir anything up but another protester replied, “We know what you are. You’re an infiltrator. Get the **** out.”

There’s little doubt that that’s exactly what he is. The left can’t successfully imitate people on the right because they literally know no one on the right. All of their attempts to imitate just turn out to be the most absurd stereotypes they glean from CNN.”

Great news. I was afraid that Northam would send engraved invitations to Antifa to participate, and orders to the police to leave them alone.

notamemberofanyorganizedpolicital in reply to OldProf2. | January 20, 2020 at 5:59 pm

Northam did send out engraved invitations.

But unlike the U.S. Postal Service that honors MLK Jr. Day,
Northam forgot that.

I don’t think anti-fa wanted to be anywhere near 22000 armed conservatives. Their style is more like 75 year-olds armed with a walker.

Q: How do you know a 2nd Amendment rally has occurred in Richmond?
A: The Capitol grounds are the cleanest they’ve been in years.

There were complaints that there were not enough trash bags for the post-rally clean-up! Who ever heard of protestors cleaning up after themselves?

Oh sure, it SEEMED peaceful but that is only in comparison to WWIII which Trump triggered. snark/off

A friend of mine commented, accurately, that the free citizens of Virginia have delivered their message that the Constitution is above everything. What remains to be seen is a) if the Democrats in Virginia understood it, b) if they believe it, and c) if other Democrat-controlled governments at all levels heard it or if they will be motivated to try to do even worse damage to the Bill of Rights in case Virginia Democrats back down.

I’m in Florida, so I am removed from the political scene there, but it seems to me that the VA politicians have little to fear from their citizens. It was the citizenry who elected them, correct?

Until the Constitution is embraced by more VA citizens who will ACTIVELY take part in the process, as those at today’s gathering have (and non-VA folks don’t vote in VA, so they don’t count), I don’t see any reason for change to occur.

I suspect the number of VA citizens who voted for the governor and his scoundrels is far greater than the number of citizens who will actually STAND UP and demand that the Constitution be the guiding document. If the people of VA prove me wrong I will be as happy as a pig in mud, but I wouldn’t put money on it.

These are aoc democrats, they’ll pass the laws and tell you to F O. They don’t care, they’re fascists.
The country needs to vote like it’s 1994 again.

CNN has morphed into MSNBC with a fake news department.

Saying CNN has a “fake news department” implies there is any part of CNN that isn’t fake news.

Proud! Now THAT is America!

Not since the premiere of Joker has the media been so desperately begging to cover people getting murdered.

Oh the Dems in Richmond are quaking in their electoral boots… NOT. They won the ballot box, altering the jury box and reducing the cartridge box. Do you think 20,000 armed Muslims in Richmond would have gotten more of their attention than this crowd? Yep.. What happens now… we shall see but look for all their gun control laws eventually being passed before election time.

Just goes to show what a bunch of fucking pussies ANTIFA are.

Its easy turning up to a conservative protest and attack conservatives who are too nice to retaliate….but a very different thing when the gathering you are wanted to attack is both heavily armed AND motivated to protect themselves from Democrat inspired violence.

As i understand it, the Repubs didn’t put up candidates in all the races, the illegal voters in NoVa & the fact that the Demoncrats have a narrow majority swung VA. Frankly i agree w/ an article i saw that said let’s give NoVa to DC & leave the Commonwealth intact. I live in WV where our legislature has extended an invitation to counties of VA to join our state. Not gonna happen, i know but a Redneck Hillbilly can dream!

To be fair, there were bloggers on the Right also trying to discourage the event with Chicken Little predictions of false flag operations leading to bloodshed and New Zealand-style gun confiscation. Lots of counterproductive name-calling that’s still going on as I type, rather than congratulating VCDL for a job well done. (Bracken, Aesop, I’m looking at you!)

In a way, all the predictions of bio probably made the event safer, by scaring away Antifa, Bloomberg and other counter-protesters.

I will say I was quite disappointed to see so many fat guys dressed in more gear than a platoon of Taliban. The Left just got a lifetime of pictures to ridicule gun owners. And I’m not sure picking up your own trash is the best way to put fear into the hearts of your enemies.