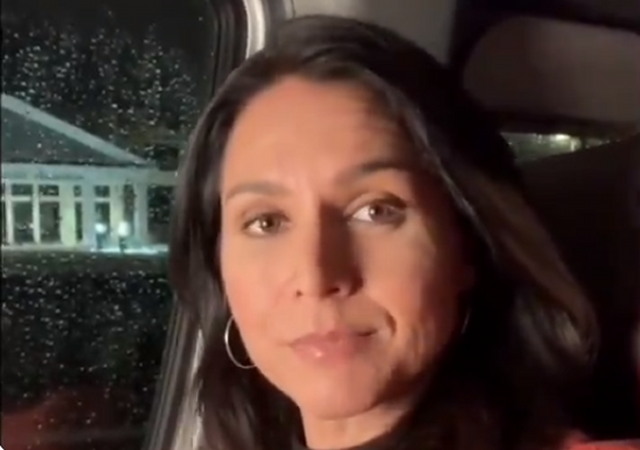 Congresswoman and 2020 presidential candidate Tulsi Gabbard (D-HI) has a habit of telling her fellow Democrats truths they would rather not hear. She just did so once again.

In a new video she shared on Twitter, Gabbard warned members of her party that their effort to impeach Trump is likely to lead to his reelection and to Democrats losing the House of Representatives.

John Bowden reports at The Hill:

Rep. Tulsi Gabbard (D-Hawaii) predicted Monday that it would be more difficult for House Democrats to remain in control of the House following passage of articles of impeachment against President Trump.

In a video tweeted Monday evening, the 2020 candidate for president wrote that Trump’s chances of winning reelection had been “greatly increased” because of the House’s vote.

“Unfortunately, the House impeachment of the president has greatly increased the likelihood Trump will remain the president for the next 5 years,” Gabbard says in the video.

“We all know that Trump is not going to be found guilty by the U.S. Senate,” she added.

In 2020, we will have a new president in the White House. How many of you do NOT want that to be Donald Trump? I certainly don’t. Unfortunately, the House impeachment of the president has greatly increased the likelihood Trump will remain the president for the next 5 years … pic.twitter.com/FRRlbWHyo7

REP. TULSI GABBARD (D-HI), DEMOCRATIC CANDIDATE FOR PRESIDENT: In 2020, we will have a new president in the White House. But the real question is how many of you do not want that to be Donald Trump? I definitely don’t. But unfortunately, the House impeachment of the president has greatly increased the likelihood that Donald Trump will remain the president for the next 5 years.

We all know that Trump is not going to be found guilty and removed from office by the U.S. Senate. It’s not going to happen. Second, the impeachment, in my view, will actually increase his support among voters and it’s going to make him harder to defeat.

Furthermore, the House impeachment has increased the likelihood that Republicans will take over the House of Representatives, so I’m really concerned that because of this House impeachment that we will end up not only with Donald Trump as president from 2020 to 2024, we’ll actually end up with a Republican-controlled Senate and a Republican-controlled House. This is going to be a disaster for our country. I know that we can beat in 2020. But our sights must be set on a higher goal than just defeating Trump.

Gabbard has come under fire from Democrats in recent weeks for voting ‘present’ on impeaching Trump, but many people on the right admire her strength of character.

Huckabee agrees with Gabbard’s prediction that impeachment will ‘embolden’ Trump

“She’s absolutely right,” Huckabee told “Fox & Friends.” “What she said was 100 percent right. This impeachment nonsense which she did not vote for. She voted ‘present’ and I thought that probably really stirred them up.”

“This is only going to not just embolden Donald Trump but, more importantly, I can guarantee it has emboldened his supporters, including me,” Huckabee said.

To get a sense of where the left stands, take a look at this tweet from Josh Marshall of the progressive outlet Talking Points Memo. If you don’t get the joke, he is referencing a line from the film The Manchurian Candidate.

Tulsi Gabbard is the kindest, bravest, warmest, most wonderful human being I’ve ever known in my life.

YouTube personality Tim Pool is a fan of Tulsi Gabbard and talked about this story in a recent video. Pool is an interesting character. He is left of center, but fair in his political analysis. Take a look:

Tulsi Gabbard was the candidate that I was most worried about. She has the military credentials and good support of her constituents. She did have some extreme left wing ideas but she didn’t have the dishonest reputation of Elizabeth Warren, the baggage of Hunter Biden, the gay only Buttigieg, socialist/communist extremes of Bernie, or anti-soft-drink Bloomberg.

The Dims could have pulled it off if they hadn’t cut each other’s throats and pulled behind someone who didn’t have the serious character flaws of all of the front runners harbor.

All left wing “ideas” are dishonest. She’s as dishonest as the rest, including faux injuns.

She is savvy. Gabbard knows that by declaring the obvious truth, she will look better to her party after 2020.

Maybe, but I doubt it. It is more likely that if Trump is re-elected and Republicans take the House the Democrat Party will double down on communism and dial the rhetoric and violence up even higher.

So if it is Gabbard’s plan to help resurrect the Democrat Party as a “moderate” party after a 2020 debacle, I think she will be disappointed. Win or lose, the post 2020 Democrats will be even more violent and deranged than they are now. Gabbard will be even more hated (and powerless) than she is now.

She’s not running for reelection. I don’t know if she’s got skeletons in her closet or what, but for someone who could certainly not count on being nominated for 2020, it seems odd to go without any office at all.

Democrats cannot help themselves, they continue doing really stupid things. They continue to drive their constituents away. TDS has driven most of them crazy. Three cheers for Trump, a forth for his tweets.

When it comes to things economic Tulsi is a blithering idiot. Other than that she’s okay, sometimes even good.

Tulsi’s the only Democrat in the game who displays any common sense at all, and looks rather good as well. It’s a damned shame she’s as much a lunatic socialist as the rest. Still, she’s the best they’ve got, if they weren’t too stupid to understand it.

I agree with maxmmillion re Gabbard’s cluelessness on things economic. But on political stuff, she’s no dummy.

I have to agree. Gabbard is as much a Communist as the rest of the Democrats she is running against, but she is smart enough to know that the current “Impeachment or Bust” strategy is shaping up to be a negative for the Party. Soviet-style “justice” is toothless without the full apparatus of the State to enforce its unjust decrees, and right now Democrats don’t have that power.

Gabbard the arrow point piercing through the flimsy veneer of legitimacy covering the current Democrat Socialist Party. Andrew Yang has also come out expressing his own dismay at the suicidal course his party is on. I believe that this will quickly grow into a groundswell of internal rebellion for the Democrats, a story that even the Mainstream Socialist Media will find impossible to ignore.

The Dems will eventually sacrifice the current party to a massive 2020 defeat as the only pathway to re-establishing their legitimacy moving forward. They MUST reject the communist takeover. Failure to do so means extinction for the party. America just will not vote for communism. Better to lose the 2020 elections with honor with hope for a comeback than go out as epic traitors cast ignominiously onto the trash heap of history.

The B-1 bomber just flew over my home seconds ago. Hopefully a good “sign from above”.

Correction, that was the B-2 bomber. It has flown at the start of the Rose Parade for the past 20 years or so.

Like some of y’all I think she is pretty bright and articulate, and (don’t hurt me!) I agree with some of what she says. Some (meaning more than 0, and I consider myself more of a pragmatist moderate, fiscally conservative, with strong support of all things Constitutional). And I viewed her as one of the most promising of the Democrats.

That said, the Democrat voters are a crazy mix of circus animals and freaks, and voting for someone who is sane is not on their checklist. She isn’t of the Lunatic Left, so she’s got no chance in hell, now or ever. But if we did have an alternative universe and Trump didn’t win his second election by a landslide, I’d rather have her be running the show than HRC, Bernie, Moochelle, Creepy Joe, Booty Judge Judge, etc.

Don’t be shy WestRock, tell us what you and Tulsi agree upon.

It’s a crazy world where a leftist looks sane compared to the rest of the Democrat Party.

An honest broker, perhaps. Practical and rational, there may be room for compromise. On one hand, on the other hand, always and forever.

So Ms. Gabbard, with her experience as a low level officer in the military and being one of the crowd in Congress, will officiate and heal all our national divisions.

Nah. She speaks well, she doesn’t get agitated, but there’s not much between those ears. She says obvious things as if they’re not obvious.

In 2020, we will have a new president in the White House.

No, we’ll have the same President.

Gabbard is as DEM as the rest of the DEMS!

Tulsi is the real deal as a person and a leader. But her core beliefs have been proven to be failures.

If she only got her head turned around…

It really concerns me that a number of people think that Tulsi is not a Big Govt. Democrat.

Yea, I put it down to she’s one of the few attractive commies.

A pretty face seems to turn some peoples brains to jello.

What has she led? Is she a commander in the military or an operational officer? I think leadership is her weakness, compared certainly to Trump but also to most of the crazy Dem candidates. Pocahontas invented and led the CFPC, maybe it was bad, but at least she led it. She led a lot of classes as a law professor. Others have led things as well, including large campaign orgs needed to get elected to statewide office i.e. the Senate. Gabbard hasn’t done any of that.

May they lose the House.

She says that like it’s a bad thing.
With luck she’ll be one of the losers in the election.

Gabbard is not running for re-election to the House:

I don’t think voting “Present” was courageous or high-minded. Either Trump is guilty of “high crimes and misdemeanors” or he isn’t. Gabbard was trying to work both sides of the street with her weasel “Present” votes.

Voting present is not courageous it just proves she is the female Obama groomed by the same people who groomed him. Now that CNN is calling out Schumer for the same thing we can be sure that this is all narrative engineering. Those who fall for the Tulsi is an independent thinker are suckers.

Trump should ask her to be his Vice-President!

She has been groomed by the globalists. She is their puppet just like Obama was. She is as progressive as they come. Why would Trump give them an even better reason to kill him?

This talking point is 100% approved and engineered or CNN would not be also be coming out – right on cue— with the same narrative this morning regarding Chuck Schumer.

Tulsi is the beneficiary of Pretty Girl Bias.

If Trump is reelected it’s just further proof that the Democrats have no clue why the right doesn’t like them, their ideas and their behavior. Personally I don’t like Trump … but when treated by the Democrats as they do … it’s impossible for me not to flip ’em the finger no matter what they have to say.