Collins and Romney voted with the Democrats. 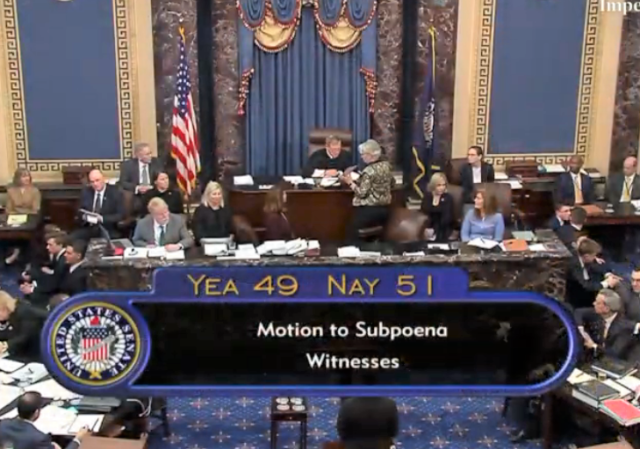 Collins and Romney voted with the Democrats to Kavanaugh the trial.

After nearly two weeks of the #ImpeachmentTrial, the Senate just voted to move forward without additional witnesses by a vote of 51-49. We have heard more than enough. The House Managers failed to make their case. It is time to acquit @realDonaldTrump.

A majority of the U.S. Senate has determined that the numerous witnesses and 28,000-plus pages of documents already in evidence are sufficient to judge the House Managers’ accusations and end this impeachment trial.

This is why I told the Judiciary Committee that it was a monumental mistake to rush the impeachment vote on an incomplete record and hand over their case to the other house and the opposing party. This will go down as a blunder of historic measure by the House leadership.

Schumer: "No witnesses, no documents in an impeachment trial is a perfidy. It is a grand tragedy. One of the worst tragedies that the Senate has overcome. America will remember this day, unfortunately, where the Senate did not live up to its responsibilities."

This is the moment pro-impeachment protesters outside the Capitol building found out the Senate voted against having additional witnesses.

[There was evidence. Lots of Evidence. Lots of witness transcripts and videos. House could have obtained more in the House and Courts, but didn't bother.] https://t.co/xGPStPxYus

Expect another “revelation” tomorrow am…

The revelation I want to hear about is that those behind all this scheming are being held accountable.

The revelation I want to hear about is that those behind all this scheming are being held accountable.</blockquote.

Sorry, that's a good one. Nobody has been held accountable to this point. Why in the hell do you think anyone involved in this attempted coup will be held accountable now. After all the outraged cries of, "This wasn't a fair trial!!!!l", "It's all a cover-up!!!", WAAAHH!!! the democrats will simply shrug and start scheming on their next plan to remove Pres. Trump. But will they actually be held accountable. Nope. Not in the least.

Any other vote would have been historic. of the 3 times this has happened NO new witnesses have been called by the Senate.

Collins ‘n’ Romney – are the most reliable members of the Democrat Party.

TX-rifraph in reply to notamemberofanyorganizedpolicital. | January 31, 2020 at 6:19 pm

They are both frauds by being “Republicans.”

I can excuse Collins as she’s from Maine and in a tough race; I can’t forgive Utah for sending Romney to the senate. Really Utah, WTF??

Does Collins expect the Trump bass in Maine to hold its collective nose and vote for her after this, or does she expect to pick up enough undecideds and independents to make up for any losses? I think she’s delusional, or maybe just between a rick and a hard place.

Recall him or execute him. Choose one.

You’re nuts. Neither of those things is possible.

Good, hopefully the rest of this farce will be brought to an end quickly.

Technically what happened was an amendment was proposed (by Dems) to call witnesses. Then a motion was made to set that aside. The vote was then 51 yes (to set aside) vs 49 no (don’t set the amendment aside) so the order is correct.

Oh wait. Apparently this was a different one than the 3 or 4 I saw. Never mind.

This one was for the witnesses to be called.

Romney needs to be pushed to the most boring, meaningless committee, and shunned by all Republicans. He can have his “cocktail” parties with Collins.
Neither should get any support whatsoever from the RNC.
Captain Special Underpants is worse than a Democrat. The only good thing about him is he proved he can’t get support from real Republicans.

He’ll be dog meat for Pence. I’m sure the polls will show him to have no chance. It is already Trump’s party now after today so I don’t know where RINOs go from here. Probably return to the mother ship with The Squad running things by then.

No argument. As long as he’s not in office anywhere, who cares?

Not the local PTA. Romney is the white male version of Stacey Abrams. Delusional to the core.

Bullshit. There is no such thing as recall in the US constitution.

Nope. Collins and Romney have proven to be too unreliable for the Republican party. They need to be stripped of all their committee assignments and very publicly put on the back bench. And all support from the Republican party, financially and otherwise, needs to be held back.

Trump needs to invite Romney to the Oval Office, quietly sit behind the Resolute Desk, and tell him, like Hillary, he will never be President.

We dodged a bullet on that one. Let’s hope Utah uses it’s primary.

When? He doesn’t have to face any voters again until well after Trump’s gone.

i looked at ballotpedia and they did not list a primary challenger for Collins, somebody from the republican party needs to primary her.

There is no one willing to waste their money trying to take Collin’s seat. It appears that in Maine, it’s either Collins or a Democrat.

It looks like the ‘Kavanaugh Plan’ stays alive. The Democrats will not allow a vote to acquit until next Wednesday. Since the state of the union is on Tuesday, we’re just witnessing another cheap shot by the Democrats.

There is no requirement that Pres. Trump actually read it to them. So he should simply decline to enter House and send Pelosi a copy of his SOTU with a request that she read it to congress and be done with it. Democrats want to snub the president, the president should snub them.

And now the endless yelping about there being a “cover up”.

Romney, Murkowski and Collins should be reprimanded and punished by Mitchell McConnell and members of the republican party.

They routinely create party disunity and by doing so lend aid and comfort to democrats and the media.

All three must be bounced from committee chairs/seats. Strip them of all perks. They can sit in their damn offices and sharpen pencils eight hours a day for all I care.

McConnell shall reduce Romney and Collins’ office staffing funds to zero and bounce both into the smallest and most inconvenient congressional senate office rooms possible.

Who will replace either of them when they resign?

Murkowski did the right thing…this time.

Name ONE time the Turtle reprimanded Collins.
Just one.

Cut Collins some slack. She was able to do the right thing on the Kavanaugh nomination.

But Mitt Romney is a major disappointment. I thought more of him. I didn’t realize that he was a smaller man than a skeeter’s tweeter. (Borrowed that phrase from an old Tina Turner song).

I could not agree with you more about Collins.

Romney, however, couldn’t manage to put the will of his constituents above his desire for revenge on Trump. Romney is going to spend the rest of his weak, useless, and short career paying for today’s vote.

What he and Collins did was give the Dems “bipartisan” support. The real surprise (pending what was promised quid pro quo) was Murkowski. The question there is … good for her or good for Alaska? Not holding my breathe… frosty as it is.

We can only hope, but Republicans generally don’t play the revenge game well.

Romney is going to spend the rest of his weak, useless, and short career paying for today’s vote.</blockquote.

No he won't. Because McConnell and the rest of the Republican party don't have the political will or the balls to do anything about traitors like Romney. Or Murkowski. Or Collins. They'll just let the disunity and nonsene these three pull happen over and over again. But Republican leadership actually doing something about it? Nah, they're too worried about their images to discipline their members.

With a majority as small as it is, they can’t afford to do anything about these senators. The last thing we need is for them to decide that they don’t need this and give Schumer the majority.

I hope the Senate finds and declares the House sent over two un-Constitutional, non-Article findings. Don’t even call them Articles, they are not. This doesn’t even require an acquittal since the Constitution was not followed. The democrats took their best shot. It not only failed miserably, it’s going to haunt them for a long time.

The cat’s out of the bag now though.

It has been made clear the House can run the same completely one-sided Impeachment and then if they have the votes in the Seante conduct the whole investigation and witness part of the trial over in the Senate.

Future Democrats will especially if they gain the votes even in the Senate run a complete s—show of Impeachment that with the help of teh Media that will look like a nightmare.

Collins is in a tight race, and the Republicans could afford to allow her to deviate. If necessary, I like to believe that she would have stepped up as she did for Kavanaugh. Mitt, on the other hand…. Mitt went walk-about and should be punished.