MSNBC’s Joy Reid: You Have “Nazis Walking Around” Because of Trump

MSNBC’s Joy Reid: You Have “Nazis Walking Around” Because of Trump

“People are afraid of, not just what he can do, but what he is doing to people, what he is bringing out in people” 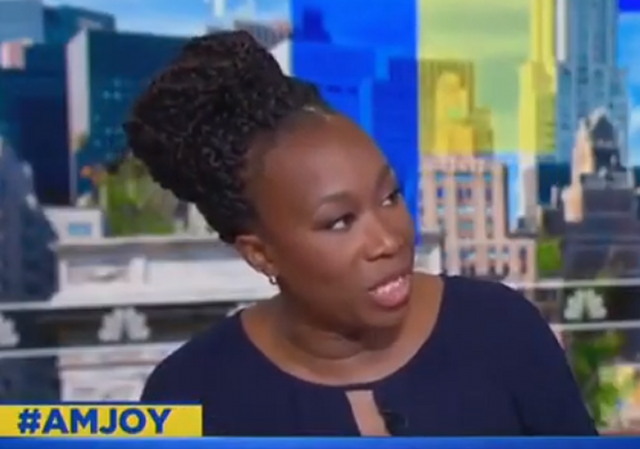 At a time when many people in media seem to have completely lost their minds over Trump, Joy Reid of MSNBC stands in a category all her own.

Reid recently suggested on the air that because of Trump’s presidency, Nazis are walking around.

Just a few weeks ago, I predicted that the closer we came to the election, the crazier the left would sound. I didn’t expect Reid to jump the shark so soon.

‘People are afraid’: MSNBC’s Joy Reid says ‘Nazis walking around’ because of Trump

“People are afraid of, not just what he can do, but what he is doing to people, what he is bringing out in people,” Reid said during her Sunday show, later continuing, “You have swatting happening, and Nazis walking around. It is a scary time.”

Reid, an outspoken critic of Trump, often spends hours of airtime on her weekend show highlighting racially-charged incidents of violence against minorities and often draws connections between violent ideological outbursts and Trump’s rhetoric…

“It’s made people feel more anxious,” she said, adding, “They feel less safe. So the anxiety — everything he does makes people feel worse.”

Joy Reid: Because of Trump Nazis are Walking Around America pic.twitter.com/CPlZKGBvt4

Here are some choice responses:

My favorite part is where Joy thinks that a poll showing 32% of people in 2019 felt anxiety vs. 39% in 2018 is an *increase.*
Thinking that Nazis are walking around confirms the part at the beginning where she unwittingly says that Trump Derangement Syndrome requires therapy.

Scary time? I was scared when there were people walking around yelling, “Pigs in a blanket! Fry them like bacon!”, during Obama’s administration of hate.

Then Joy turns it around that it is Trump causing anxiety

The graphic during the segment. Joy Ried: With everything Trump does he increases peoples anxiety. He’s just making people feel worse. ??‍♀️ pic.twitter.com/LTYMjAHlFJ

The media are the only ones causing the anxiety in people with their hysterical and irrational rhetoric all for ratings. #EnemyOfThePeople

I wonder if the FBI has finished investigating all that hateful content someone else supposedly posted on her old blog.

I would rather be a Right Wing Nut Job
than a leftist with no nuts and no job.

notamemberofanyorganizedpolicital in reply to MattMusson. | January 14, 2020 at 2:25 pm

Reid IS a Nazi.

Joy Reid holds the world record for succumbing to the Peter Principle faster than anyone in history.

Which Joy has the lower IQ, Reid or Behar? Toss-up?

Their first names are ironic, aren’t they?

Not really. Ignorance is bliss, after all. So why should stupidity not be joyous?

The nature if dish soap is grease cutting, and with that hair she needs a very good grease cutter.

According to the left-wing loons, they’re right. (They’ll insist they’re always right, all of the time anyway, but this is a special case)

Before Trump, they had the belief (frequently wrong) that they were winning. Guns would be confiscated, the Green Nude Eeel would pass, the rich would be sacrificed on the altar of Free Health Care, Education, and Everything, and don’t forget the children. Since they were winning, they didn’t even have to pay attention to the riff-raff who claimed otherwise.

After Trump, they can’t even delude themselves that far anymore, and they see people who disagree with them *everywhere* Since it’s obviously not their fault, it has to be somebody else, therefore the lock down on their favorite book, Everybody I Disagree With Is a Nazi.

(I can’t find the satirical picture right away, so just imagine I pasted it in here)

If they actually managed to stamp out the rich …

Your hair dresser has heard Walk Like And Egyptian too many times.

Yeah! What’s with that hairline?

And we have traitors, liars, and complete idiots walking around because of Obama.

Don’t discount clinton’s role in all this: he was the original traitor:

… but every time I think I have found one for sure, he or she tells me “no, I’m just a Democrat”

Bernie has a plan for Trump supporters:

But – but – I saw on a twitter thread on threadpeaderapp that that news came from a discredited right wing source- Project Veritas. I mean, they post unedited videos of people saying things! How can you trust things like that?

Just like reports on the Ukrainian Famine, mass executions and the Gulag. Truly, the left never stops lying.

God, what a moron.

Is this constant rhetoric designed to justify any and all actions required to “save” the country from Trumpism? Hollywood has the technology to “Wag the Dog” as an “October Surprise” that would take months/years to unravel after being too late to unmask prior to an election. 2020 is looking more like 1860.

Is it not what you know, but
who you (expletive deleted)>

ahad haamoratsim in reply to notamemberofanyorganizedpolicital. | January 14, 2020 at 3:12 pm

…know (in the Biblical sense of the word)?

Holy crap, man … no one needs that image floating around in their head.

Reid is an infantile fool and reprobate.

On the contrary, the new “Nazis” are Jew-hating blacks, black Muslims and assorted bigots “of color,” whose racism and bigotry against Jews have been enabled, whitewashed, excused and rationalized and incited by contemptible Dhimmi-crats and the Dhimmi-crat Party, for decades.

The Dhimmis believe, rather transparently, that a person’s dark skin pigmentation offers total immunity from criticism for brazen Jew-hatred.

The Dhimmis are responsible for the recent murders and vicious assaults of Jews committed by ginned-up “persons of color” who have been fed a steady diet of vilification of Jews and Israel, and, contrived victimhood narratives, for decades.

It’s like the story of the guy with a hammer always seeing nails.
When you go looking for ‘white supremacists” or “Nazis”, you will find somebody who put can put that ‘label’ on.

Whatever happened to “no labels” ?

. . . Everything he does makes people feel worse.

Well, it’s cheered me up no end.

Here’s an idea for DJT—talk about sprucing up FDR’s old concentration camps. Announce that they’re to be opened as “museums” and “parks”—nudge nudge, wink wink—then sit back and watch the paranoia. That would cheer me up even more.

We have an entre community of blacks in NYC (the sharpton/obama contingent) acting like anumals and attacking Jewish people on the street.

Joy reid is one of them.

Her “Trump nazi” accusations are classic projection of herself.

Epstein didt kill himself, obama is a traitor, there is a swamp/left/islamic axis in our country trying to enslave us.

First shots to be fired in Virginia.

There’s a cancer of black anti-Semitism. It’s beyond moronic, but very danagerous. And it sits squarely at the feet of al sharpton, and his booster barack obama and michelle obama.

Sharyl Attkisson and James Rosen have yet to comment.

How much does this fool get paid?

I get it now. The “progressives” hate the 1st Amendment because the don’t want people on their side, like Joy Reid, to be free to speak. Joy and her ilk never make the “progressives” look good.

“You have … Nazis walking around.”

Trump took their unicycles away.

My advice to any new country just starting up… pick your own damn cotton!!

The liberals encouraged the resurgence of white supremacy, to the limited extent that it has occurred.

Well, she is right about the fact that the Nazi-crats have really come out of the woodwork since Trump ran for president.

Who let those communists just walk around? After all, communists murdered far more people than Nazis.

Some awesomeness in video at link.

[email protected] asks for name of fallen service member that doesn’t justify Soleimani killing: “I will sit here and wait…”

Rep. Mast: “Mr. Chairman, I have not yielded back my time.”

The NAZI’s in today’s America call themselves “Antifa”.

Arguably the biggest lie Joy Reid and countless other leftist pundits have been pushing since Donald Trump was sworn in – gangs of white supremacists on every street corner menacing every non white person they encounter.
I look for these gangs of Nazis all the time when I’m driving around town..

The only thing I’ve seen here in Phoenix was a bunch of Fascists masquerading as “Anti-fascists” that were dressed up like Nazi stormtroopers. Had one at a Trump rally that thought it was a good idea to kick a CS canister back at the Police. He got the next one directly in the nads and then got arrested. Good times…

what happenned to her head????
she will become bald with all that weight
i cannot believe how msnbc is so vile
and no one is watching well trump will keep
them busy in the nxt 4 years

Democrats use the short term for National Socialists as though it doesn’t apply to them and their own policies.

It appears they think that if they accuse others of something, it inoculates them from the charge.