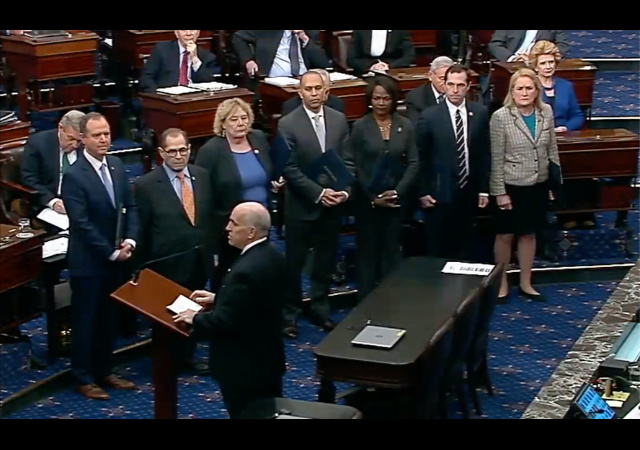 The Senate will receive the articles of impeachment against President Donald Trump at 12 p.m. ET. The seven managers from the House will officially deliver the papers. This marks the official start of the trial.

At 2 p.m. ET, the Senate will swear in Supreme Court Chief Justice John Roberts and the Senators who will serve as jurors in the impeachment trial.

The 7 House impeachment managers march over to the Senate through the Capitol Rotunda to present the articles pic.twitter.com/2Z9poneEgS

The seven managers marched to the Senate led by House Sergeant-at-Arms Paul Irving.

“Hear ye, hear ye, hear ye: all persons are commanded to keep silent on pain of imprisonment, while the House of Representatives is exhibiting to the Senate of the United States articles of impeachment against Donald John Trump, president,” Irving told the Senate.

Intelligence Committee Chairman Adam Schiff read the articles of impeachment in front of the Senate.

Speaker Nancy Pelosi gleefully signed the articles of impeachment on Wednesday evening. She used pens literally served on a silver platter to write each letter of her name. She then handed out the pends to those around her. Afterward, she took pictures with the recipients with broad and happy smiles.

BREAKING: US Supreme Court Chief Justice Roberts takes oath to preside over the US Senate during the impeachment trial against President Trump. pic.twitter.com/axlBEs7ujO

BREAKING: US Supreme Court Chief Justice Roberts swears in US senators to act as jurors in the impeachment trial against President Trump. pic.twitter.com/hnmdDXpnKV

McConnell told the chamber what to expect:

McConnell provided the deadlines for briefs that can be filed on behalf of the President and House.

“I ask unanimous consent that in recognition of the unique requirements raised by the impeachment trial of Donald John Trump, President of the United States, the sergeant of arms shall install appropriate equipment and furniture in the Senate chamber during all times that the senate is sitting for trial with the chief justice of the United States presiding,” McConnell said.

The Senate has adjourned until 1 p.m. ET Tuesday, when the formal trial will begin.

I’m waiting for the ridiculous collapse of the pose of seriousness.

But Pelosi says Trump is ambitious,
and Pelosi is an honourable woman ( who loves to shield her actions by quoting great words ).

If it were so, it was a grievous fault.

.. but Pelosi is Obstructing the Senate with these ridiculous charges.

Another photo of condemned prisoners!

What an unattractive group of people

notamemberofanyorganizedpolicital in reply to gonzotx. | January 16, 2020 at 12:40 pm

What else would you expect?

Which plays no small part in why they are who they are and why they do what they do.

She already imagines that she’s president.

I bet that Hillary has another hissy fit.

So…. do the House floor managers get sworn in too? Or are they allowed to lie, lie, lie.

Like something as silly as an Oath would keep them from lying. They violate their oath of office pretty much daily.

True. Members of both houses of Congress swear to uphold the Constitution before they’re allowed to take their seats.

And yet here we are.

Intelligence Committee Chairman Adam Schiff read the articles of impeachment in front of the Senate.

Did he make them up on the fly? As, you know, a parody, or something.

I am having trouble coming up with the music that my brain overlays that perp walk of the “Maleficent Seven”. So here are the choices my brain provided.

1: The theme from Magnificent Seven. (Far to heroic sounding IMHO.)

4: “We represent the Lollipop Guild” from Wizard of Oz.

One Foot in the Grave theme song

Funeral March of a Marionette.

The only song that can truly do justice to the somber warriors from the House is “Entry of the Gladiators”.

“….nobody knew who Adam Schiff was on Jeopardy tonight.

Think the American people are focused on impeachment? Think again.”

So, due diligence, fiduciary responsibility, and mitigating progress of collateral damage, are impeachable offenses.

The circus has started, and here come the clowns…

What a joke!!! The “house managers” marching solemnly over to the Senate with the leader holding the articles out as if they were some sacred text. I cannot find the words to express the depths of my disgust with them.

The entire left is a sick disease, as are the so called “conservatives” that enable them.

Best photomeme I’ve seen on it.

The first article sounds like it could have some substance, because it’s about Ukraine and who the hell knows what’s going on over in Ukraine.

The second article is transparently stupid on its face. Have they ever heard of Executive Privilege? It’s just a temper tantrum.

The whole thing falls miles short of justifying this very serious process, and it’s not the Senate’s job to try to substantiate Article 1 if the House hasn’t even provided a prima facie case. That could go on forever, but the Dems will suggest “just a couple witnesses” — but that’s wrong too. Zero witnesses, you were supposed to have your witnesses before impeaching, the articles should be judged on what you have.

I could be pleasantly surprised but I think the circus continues. The SWAMP both DNC and GOP have overrun our nation.

Many or us play arm chair quarterback. If we look at the pluses and minuses and listen to the talking heads and elites it seems to me that the proper response is STFU. The things that have been done during the Trump administration are impressive. All SWAMP forces were put against POTUS; still, the accomplishments have been more than the elites speculated.

Trump Will Be ‘Acquitted Forever Of These Bogus Charges’