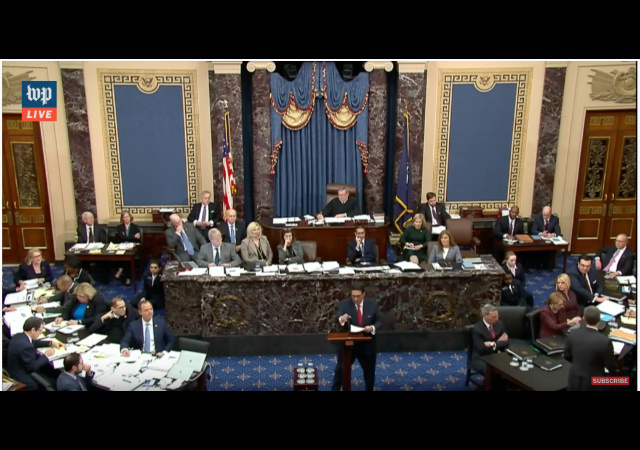 Today begins the question-and-answer session. The Senate has 16 hours total to ask questions, which will be split into eight hours today and eight hours tomorrow.

It will start at 1 p.m. ET. These next 16 hours could influence the witness vote.

The Senate will alternate between Republican and Democrat questions. They can direct these questions to the Democratic House managers or Trump’s legal team.

As I said the next 16 hours could determine how senators will vote on calling witnesses. The answers could push those undecided on witnesses or may even change a mind or two.

Schiff keeps trying to convince us that he doesn’t know the identity of the whistleblower.

Adam Schiff just claimed on the Senate floor that he doesn't know the identity of the whistleblower.

Let's go to the tape on that and the other examples of his deliberate efforts to mislead the public. pic.twitter.com/RCgadvPgd0

The questions I have submitted for the Q&A period of the Impeachment Trial: pic.twitter.com/JTHlKJfcNN

One senator asked the House managers if they can expedite the witness depositions:

A Democratic senator asked House Managers if it’s true that depositions of the three witnesses in the Clinton trial were completed in only one day each. The senator also asked if it’s true that the Chief Justice, as presiding officer in this trial, has the authority to resolve any claims of privileges or other issues without any delay?

“What is clear, based on the record that was compiled by the House of Representatives where up to five depositions per week were completed, that this can be done in an expeditious fashion,” Jeffries said.

As I’ve said many times, it doesn’t matter if there was a quid pro quo or not. My 1st #impeachment question explains why.

“As a matter of law, does it matter if there was a quid pro quo? Is it true that quid pro quos are often used in foreign policy?”

Dershowitz said that you see quid pro quos are used in foreign policy a lot:

He added that every US president has had “mixed motives” when setting up foreign policy.

Here’s how he put it:

“Everybody has mixed motives, and for there to be a constitutional impeachment based on mixed motives would permit almost any president to be impeached. How many presidents have made foreign policy decisions after checking with their political advisers and their pollsters?”

To the shock of no one Senate Minority Leader Chuck Schumer asked the House Democratic managers if the Senate can render a verdict if they do not hear from Bolton and other witnesses. Little Adam Schiff, of course, answered no.

Collins submitted this question on behalf of herself, Murkowski, and Romney for Trump’s defense team:

“If President Trump had more than one motive for his alleged conduct, such as the pursuit of personal political advantage, rooting out corruption and the promotion of national interests, how should the Senate consider more than one motive in its assessment of article one?”

.@POTUS counsel Patrick Philbin response to first question: “Once you’re into any mixed motive situation, once it is established that there is a legitimate public interest that could justify looking into something…the managers’ case fails and it fails under their own terms.” pic.twitter.com/nBmC8NZMyD

A source close to Alexander said he has no plans on asking a question today. The source explained that Alexander “wants to see what others ask and gauge the answers before deciding whether he needs to himself.”

Lots of chatter on the Hill before the Senate begins its session. Everyone cannot get over potential witnesses, especially when it comes to the moderate Republican senators.

“I’m going to let the defense and the prosecution decide which they want to call as a witness or witnesses, but John Bolton is one of those I’d like to hear,” he added.

Alaska Sen. Lisa Murkowski and Maine Sen. Susan Collins have made people believe they will vote to bring forth witnesses. The Democrats would then need one more person.

Eyes have settled on retiring Tennessee Sen. Lamar Alexander, but he has remained silent.

Wyoming Sen. John Barrasso told reporters, “The momentum in the conference clearly is just ending this.” He reminded them that the “public isn’t paying attention anymore.”

Barrasso’s not wrong. Last week I blogged about the ratings. Every time the Democrats try to take down Trump the ratings go down.

How about one question to the Democrat House managers-

Can you define any crimes committed by President Trump?

You can’t beat Schiff’s reaching-one-question-back answer that if any part of a dual motive action is personal interest, it’s impeachable.

Should have immediately had a follow on …
“So in the future if a politician or his family members commits a corrupt act, such as allowing a son to take a high-paying no show job without qualifications with a foreign entity the politician controls the shutoff valve for their foreign aid money, should he immune to federal investigations if the president is of the opposing party?”

The important idea is that you must always act against your own interests in everything you do, or you’ll be impeached.

If your interests and the nation’s happen to coincide, you’ve got to skip acting.

Follow-up question, Manager Schiff: “Is any part of your motivation in bringing this impeachment political or personal?”

“Alaska Sen. Lisa Murkowski and Maine Sen. Susan Collins have made people believe they will vote to bring forth witnesses. The Democrats would then need one more person.”

Yes, they can ask and request witnesses until they are blue in the face. The Senate cannot compel witnesses that the Trump Administration claims executive privilege. This is bizarre. This dance makes no sense. The endresult will be the “Whistle Blower”, the ICIG, Vindman, and even Schiff and members of his staff.

This is a total farce right now, coordinated questions with people giving a response from a script, videos and powerpoint slides at the ready

talk about a low bar to cross

Right out of the chute Collins embarrasses herself

I am still waiting for lightning bolts from the sky to strike down the liars as they speak. I know it is a long shot. Why aren’t these people under oath. They are to remain seated and silent under pain of imprisonment, but they can lie like a rug in Macy’s window until the cows come home.

Of course, the questions were given to the House managers overnight. Every time they stood up to answer a question they had to find the correct page and then Lofgren stood up once when she realized she didn’t have the right answer. The Repubs never used any book or slides. How did the Dems have slides made on questions they hadn’t heard? What a f–ing farce! If I were a senator I would be highly offended that they would try this crap in the Senate. No witnesses on Friday’s vote. Guaranteed!

That it’s organized doesn’t matter. If anything it improves it over free essay ramblings that everybody was giving by giving a topic and an answer.

Nobody imagines the senators are curious about anything or could deal with it on their own in any case. Their skill is skimming and lobbiest fleecing.

I have an idea: Eliminate our entire array of “enhanced interrogation techniques” at Guantanamo and replace them with tapes of these absurd, staged questions and answers. I can think of no worse torture than being forced to listen to these doofuses go on and on about nothing. WHO CARES!

Chief Justice Roberts is a fool for (#1) letting the respondents get away without answering the questions and —even worse—for (#2) calling this bunch of buffoons “The World’s Greatest Deliberative Body.”

rep crow really laid an egg, hee was claiming nothing had changed in the ukraine over the last few years, he somehow forgot that the people of ukraine elected a new president who ran on an anti corruption campaign in 2019

Keep in mind that there are four Dem Senators who do not want witnesses: Sanders, Klobatcher, Warren and I forget the fourth.
Witnesses would mean that they are stuck in Washington while the primaries ore going on. They just don’t want to be seen as voiting against witnesses.

The funniest thing would be if the four main opponents to Biden lose out to him because of impeachment, and then he comes out so muddy ( I already think he is ) that he will lose to Trump. The Dems will have sown their own defeat.

“To the shock of no one Senate Minority Leader Chuck Schumer asked the House Democratic managers if the Senate can render a verdict if they do not hear from Bolton and other witnesses. Little Adam Schiff, of course, answered no.”

So irritating! We were assured that there was ironclad evidence, sufficient to convince ANY impartial juror, so the president must be impeached and removed from office. Now suddenly despite all of our pages of evidence and days of “prosecuting”, we are unable to render a verdict if we don’t hear from another witness.

Rep. Schiff, if your case REQUIRES the testimony of Bolton to reach a verdict, why have you wasted everyone’s time bringing an incomplete impeachment case? I’m not sure if you are admitting to incompetence, laziness, or vindictiveness towards the president–perhaps there are multiple issues. But every shovelful of dirt you move trying to bury this president only serves to diminish you and your reputation further.

I voted for Romney although I no longer remember why!