Graham: Let’s Have A Quick Trial Even If Pelosi Doesn’t Hand Over Articles Of Impeachment

Graham: Let’s Have A Quick Trial Even If Pelosi Doesn’t Hand Over Articles Of Impeachment

Graham said if Pelosi held onto the Articles of Impeachment then the Senate has “to take matters in our own hands.” 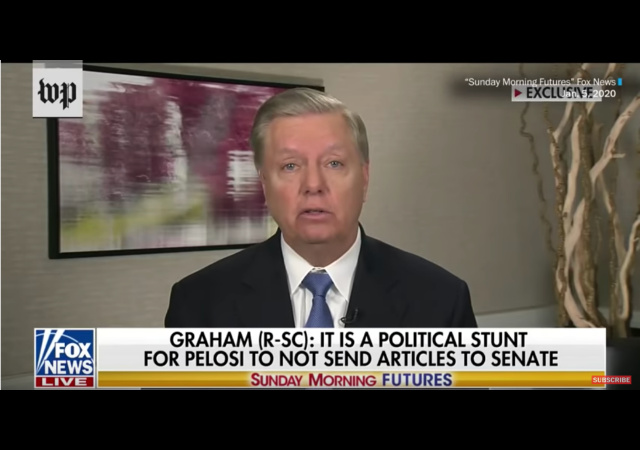 “Well, we’re not going to let Nancy Pelosi use the rules of the Senate to her advantage. This is dangerous to the presidency as an institution,” Graham said. “They impeached the president, but the speaker of the House is holding the articles back, trying to extort from the majority leader of the Senate a trial to her liking. They’re trying to hold these articles over the head of the president.”

He insisted the GOP-controlled Senate wants to follow the model used in President Bill Clinton’s impeachment trial in 1999. That means the Senate would “take the record established in the House, let the House managers appointed by Pelosi make the argument, let the president make his argument why the two articles are flawed, and then we’ll decide whether we want witnesses.”

Graham said if Pelosi held onto the articles of impeachment then the Senate has “to take matters in our own hands.”

He would work with “McConnell to change the rules of the Senate so we could start the trial without her, if necessary.”

If they changed the rules, the Senate would consider the articles of impeachment delivered to the chamber by the House so they can start the trial. Then the senators would “invite the House over to participate if they would like.”

If the House members refuse the invite, “dismiss the case and get on with governing the country.”

Of course, McConnell has to agree with this move in order for it to happen. His remarks on Friday show that he would go along with Graham.

McConnell said on the Senate floor that Pelosi having any input on the Senate trial is a “fantasy” and a “non-starter.” He made it known that the Senate will not start an impeachment trial until the Democrats “muster the courage to stand behind their slapdash work product and transmit the articles.”

“We, the members of the United States Senate, having chosen to humor our friends in the other chamber by pretending the alleged articles of rumored impeachment are real, do hereby find that there is no basis to remove Mr. Donald John Trump from the office of President of the United States.”

“He would work with “McConnell to change the rules of the Senate so we could start the trial without her, if necessary.”
*****
Mitch can run the show however he want to..IF he has 51 votes…. and with Romney, Collins and Murkowski in the caucus, that’s a big if. Pre-trial Pence can break a tie vote, after the trial starts, it would be Roberts acting as tie breaker and that will be interesting.

“”it would be Roberts acting as tie breaker””

Not unless McConnell wants it that way and puts it in the rules. How would Roberts get to be a member of the “jury”? Rehnquist seems to have considered his role to pretty much stay out of the way and let the Senate do its thing.

It’s not up to McConnell, or the senate. The president has a casting vote. The constitution says so explicitly about the regular president, i.e. the VPOTUS; the clear implication is that the same applies when the Chief Justice is standing in for him. (The President Pro Tem, of course, has a deliberative vote, and therefore obviously can’t also have a casting vote.)

“Roberts get to be a member of the “jury”?
*****
Chief Justice Chase voted twice to break a tie vote in the trial of Andrew Johnson and was confirmed by a Senate procedural vote. The precedent was established that as the Presiding Officer of the Senate during a Presidential impeachment trial, the Chief Justice has a vote to break a tie. Could this be changed by another procedural vote? Probably but not likely.

In the Clinton trial, Rehnquist said the Senate is not just a jury, but a court. That means the Senate is ultimately in charge, not the Chief Justice.

Any ruling by the Chief Justice can be challenged and overturned by a majority vote of Senators.

What is the Senate gonna have a trial about w/o those articles?

They should just pretend there are no articles and go about their other business, until and unless Whacky Nan sends them over.

And if McConnell does that then he’s giving “Whacky Nan” and Chuckie Schumer exactly what they want. And that’s the ability to claim that Pres. Trump has been “impeached” but not having to go through with that pesky Senate trial that would show that the two charges brought against Pres. Trump have no real basis in fact.

So what McConnell needs to do is either (1) inform Pelosi that no Senate business will be conducted beyond federal court appointments until she transmits the Articles of Impeachment to the Senate or; (2) introduces a Senate resolution that exonerates Pres. Trump from wrongdoing as outlined in the Articles of Impeachment without a trial or; (3) holds the damn Senate Trial without the assistance of the House. and exonerate him for lack of evidence of wrongdoing.

I’d go with (2). They should be able to dismiss without even getting to a trial, if the articles aren’t worth anything. Keep all the layers of protection.

I doubt (and polling seems to confirm) that there are any significant numbers of voters who would be swayed by this whole fiasco, whether Pelosi submits the articles or not – and people on both sides are already arguing that if the articles are not submitted to the Senate, that impeachment hasn’t actually occurred. In any event, no matter what happens in the Senate, the Dems are still going to campaign on the claim that he was impeached. That much is set in stone.

technically there need not be a trial

but by then it would be too late as McConnell can just say the impeachment trial will not commence until the Senate Jud. committee forwards said evidence in their hearings forward

Lindsey Graham says he has invited Rudy Giuliani to testify about what he found out in Ukraine before the Senate Judiciary Committee — unrelated to impeachment, just an independent investigation. I hope things go that way, and that it’s thorough.