Ken Cuccinelli: “Why do DHS and ICE care more about protecting NYC residents than” NYPolice Commissioner and Mayor? 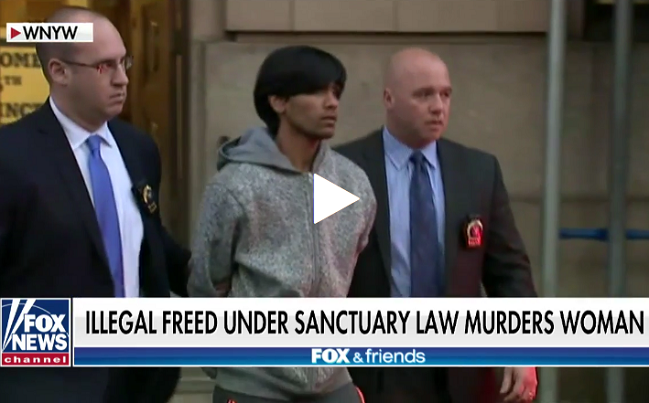 An illegal alien has been arrested in the rape and murder of a 92-year-old woman in New York City. The suspect had been detained by the NYPD but was released prior to the crime despite an ICE detainer.

The NYPD disputes that it received the detainer from ICE, but DHS is adamant that they did receive the detainer and chose to release the illegal alien due to New York City’s sanctuary policies. The NYPD denials resulted in ICE releasing publicly the faxed confirmation that the detainer had been received.

(1/2) A 92y.o. woman was raped & murdered in New York after NYPD failed to honor an ICE detainer because NYPD refuses to cooperate with ICE. NYPD denied receiving the detainer (though they got one!), but doesn’t honor them anyway! Where’s the media coverage? Where’s the outrage?

(2/2) Why do DHS and ICE care more about protecting NYC residents than @NYPDShea and @NYCMayor?

Federal immigration authorities on Monday issued a detainer for an illegal immigrant who is in NYPD custody for the alleged sexual assault and murder of a 92-year-old woman in Queens last week.

Reeaz Khan, 21, a Guyanese national who is in the country illegally, is accused of violently attacking and raping a woman named Maria Fuertes as she was walking home near Liberty Avenue and 127th Street around midnight on Jan. 6.

Fuertes lay half-dressed in 32-degree weather for two hours before she was found, conscious but “incoherent,” at around 2 a.m., according to a criminal complaint. She was taken to an area hospital where she was pronounced dead.

Investigators gathered surveillance footage to identity Khan as a possible suspect in the brutal attack. He was arrested Thursday night and confessed to the murder, The New York Post reported.

He appeared in court Friday where a prosecutor said Khan had told detectives that, “He fell down, his belt broke, his pants fell down and his penis fell near [the victim’s] vagina.”

According to an ICE press release, Khan was previously arrested in November on assault and weapons charges. ICE had issued a detainer for him then, but Khan was released from custody because of New York City’s sanctuary policies.

The outrage over this incident is intense, with NYC’s sanctuary policies coming under fire.

There has been a complete breakdown of law & order in New York City. NYC proudly passed sanctuary city laws & bragged about it for months. But now they, & more importantly, the citizens of NYC are facing the deadly consequences of the sanctuary policies. https://t.co/esXd5yYi1Q

But the case has renewed scrutiny on New York City’s policy of being a “sanctuary” jurisdiction — meaning it does not comply with detainers issued by federal immigration authorities unless they are convicted for one of a number of serious or violent crimes. Those detainers are requests that Immigration and Customs Enforcement (ICE) be alerted when an illegal immigrant is about to be released from custody so that they can be transferred to ICE custody and go through deportation proceedings.

ICE announced this week that they had issued a federal immigration detainer on Khan in November when he was previously arrested on assault and weapons charges. The NYPD ignored the detainer and Khan was released.

Thomas Decker, field office director for ICE’s Enforcement and Removal Operations (ERO), said in a statement that the sanctuary policy was “dangerously flawed” and accused New York politicians of caring more about criminal illegal immigrants than their own people.

“New York City’s sanctuary policies continue to threaten the safety of all residents of the five boroughs, as they repeatedly protect criminal aliens who show little regard for the laws of this nation,” he said. “In New York City alone, hundreds of arrestees are released each month with pending charges and/or convictions to return back into the communities where they committed their crimes, instead of being transferred into the custody of ICE.”

“Clearly the politicians care more about criminal illegal aliens than the citizens they are elected to serve and protect,” he said.

The NYPD has egg on its face after initially denying receipt of the detainer.

The NYPD initially told the Post that it “did not receive an ICE detainer” regarding Khan — leading ICE to take the extraordinary step of posting the fax confirmation sheet proving that the request was made.

“It is the height of hypocrisy for NYC to blame ICE for this tragic crime. The mayor & police chief have continually celebrated that they don’t honor ICE detainers, & to deflect the criticism for this completely preventable murder is incredibly disingenuous & shameful,” Acting ICE Director Matthew Albence said.

"It is the height of hypocrisy for NYC to blame ICE for this tragic crime. The mayor & police chief have continually celebrated that they don’t honor ICE detainers, & to deflect the criticism for this completely preventable murder is incredibly disingenuous & shameful… (1/2) pic.twitter.com/zTQIBIfoR9

NYC mayor and failed presidential candidate Bill de Blasio defended the city’s sanctuary policy and blamed the Trump administration for fear-mongering over the rape and murder of a 92-year-old woman by an illegal alien.

The last time crime was as low in New York City as it is right now, the Dodgers were in Brooklyn and your boss was in Queens — and in diapers. If you’re serious about keeping our country safe, quit spreading lies about the good work of the NYPD. https://t.co/cfua03lGWn

The Trump administration’s scare tactics destroy trust in law enforcement. The day our police ask for immigration status is the day people stop reporting crimes & sharing information. It’s the day we stop being the safest big city in America. We won’t let that happen.

Not Second Amendment sanctuaries. We need more of those.

True enough. But do enough Americans who are not Democrats understand that to the point that the Democrat Party will be rejected? Are enough Americans paying attention as we move farther and farther away from our founding principles?

Stated otherwise, is there a sufficient remnant?

“The most important election of our lifetime”

This was likely said before the 2000 election, but since that election (Bush/Gore) I’ve heard it over and over, and with increasing intensity.

So 2020 will be the latest version of “the most important election of our lifetime,” explaining why Democrats are going hammer and tong on impeachment. What has me more concerned however is the election of 2024 and our finding a candidate who can effectively carry on Trump’s attempt to return to our founding principles.

I remain somewhat hopeful. The election of Trump pulled us back from the precipice’s edge. Had the harridan prevailed, the game may well have been completely lost.

Suggest a viewing of the 30-minute Overview of America,

Very helpful in explaining systems of government. We, or at least not enough of us, appreciate what’s been given to us. The solution – increase the numbers of those who understand and appreciate.

This s/b seen by everyone before voting next November.

In retrospect, Bush43 wasn’t that much better than Gore. Because of Bush43’s lack of courage, he consistently caved to (or tried to) cave to the Democrats. Does “See you at the signing” ring a bell. Trump has his faults, but lacking courage isn’t one of them.

Raped and murdered a 92 year old woman.
This thing is not human, and should not be treated as such.

Could there be a felony murder charge for someone?

No, because New York will do its best to get him to safety out of the immediate range of ICE.

It’s not an ICE problem so much as releasing criminals problem. You can always find somebody who would have been stopped by ICE among the released criminals.

A good analysis would have to check false alarm rates each way, whether ICE vulnerable releasees are more or less likely to offend in this or that egregious way than the rest of the population released.

You want ICE involved because it’s the law, not some anecdotal story of something bad happening.

He appeared in court Friday where a prosecutor said Khan had told detectives that, “He fell down, his belt broke, his pants fell down and his penis fell near [the victim’s] vagina.”

Then it only stands to reason that said penis must be forcefully shoved in her (now presumably exposed) vagina and, after said penis is finished with its duty, he murder her.

I have trouble imagining a lawyer telling that story to the court.

in a perfect world, if this had been my 92-year old mother, di Blasio would have been next

Exactly! I don’t buy deBlowsio’s red herring argument. If this had been my 92-yo mother ….. deBlowsio would be pushing up daisies. Take that to the bank.

“It’s the day we stop being the safest big city in America.” — Mayor Bill de Blasio

The blood is on the hands of Fredo’s “smarter” brother and henry wilhelm.

“Ken Cuccinelli: “Why do DHS and ICE care more about protecting NYC residents than” NYPolice Commissioner and Mayor?”

A better question is: why should New York City residents care at all? NYC has a substantial illegal alien population, many of whom are La Raza-type fanatics just itching to stick it to the hated “gringos” and other non-Latinos, so its not like they give a flip about an old woman whom they view as an imperialist oppressor anyway. Then there are the ultra-rich gentry liberals who liven in gated communities and never pass up an opportunity to virtue signal (no matter how many lives it costs). Then there are lower and middle class residents who are part of the Progressive hive mind and who would willingly sacrifice their loved ones to the fires of Diversity-Moloch so they can boast about “making the world a better place”.

For those few who don’t want those whom they love made into a human sacrifice to open borders, what can they do? The NY Democrat Party is fully committed to the path of turning the USA into a communist hellhole, and the minuscule NY Republican Party is not even a speed bump on that path. Like any totalitarian society, NYC has a powerful propaganda machine to drown out dissent. Corrupt local officials and law enforcement exist merely to serve the Democrat Party. One may as well expect the unfortunate residents of North Korea to vote the Communists out of power.

I know it won’t happen, but it would be great to see ICE arrest de Blasio and all members of the New York city council, who voted for the sanctuary policy, as accessories before the fact. It is a crime that politicians aren’t held accountable for defining the law.
What these cities, who have declared themselves sanctuaries for illegal immigrants, are doing goes beyond civil disobedience. They have crossed firmly over into criminal contempt for federal law.

Sorry for the downtick. Big thumb, small screen, hyperlinks too close together.

Wrong. It’s not even civil disobedience. They are simply standing on their constitutional right to refuse to assist federal law enforcement.

Who ever came up with “sanctuary city”?
And why was it not nipped in the Butt?

It was not “nipped in the bud” because it can’t be. The constitution protects states’ rights to do exactly this.

The Mayor and Police Chief should have been front and center at the funeral, in handcuffs and shackles.

Her relatives should be able to sue DiBlasio and Cuomo.

Think this Branco cartoon applies to these situations also.

“Ken Cuccinelli: “Why do DHS and ICE care more about protecting NYC residents than” NYPolice Commissioner and Mayor?”

Because the NY Police Commissioner and Mayor regard the American citizens resident in New York City to be mere chattel and serfs. Like all Democrats do.