She thinks she’s electable because she defeated Scott Brown in 2012. 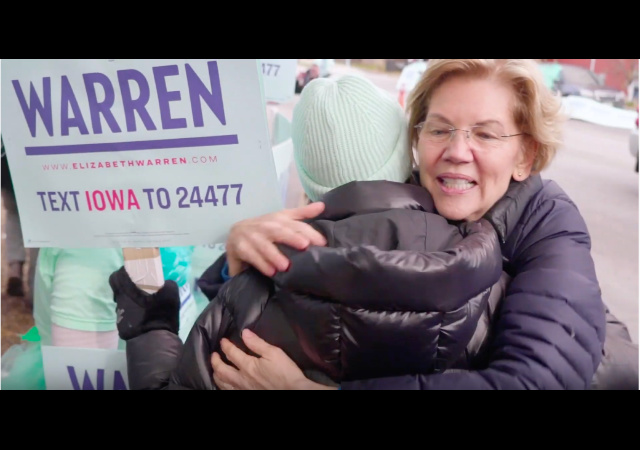 Electability has started to bother the Democratic Party with Sen. Elizabeth Warren (D-MA) front and center.

Warren has ramped up her efforts in Iowa after her momentum dropped. She led in Iowa polls since fall, but a poll released on Friday showed Sen. Bernie Sanders (I-VT) in first place at 20%.

Warren fell to second at 17% with former South Bend Mayor Pete Buttigieg in third at 16%.

National front-runner, former Vice President Joe Biden, remains in fourth. He “has struggled to translate his national appeal in Iowa.”

The Boston Globe reported a few thoughts from people who attended a Warren rally in Iowa:

When Senator Elizabeth Warren took the stage in the waning light of a frigid winter evening in western Iowa for her first presidential campaign event in the state, Lisa Koch declared she was “all the way in” for the Massachusetts liberal.

But for Koch, an attorney who lined up outside the bowling alley in Council Bluffs well before the event inside began, mixed in with her excitement was concern about the breadth of Warren’s potential appeal as a presidential candidate — in other words, her electability.

“Older white men are not going to like her. There’s going to be women who don’t like her either,” Koch said. She added: “I hope she has a chance.”

More than a year later, as Warren stood onstage in a school on Saturday in Mason City, Iowa, a question from a volunteer who had been knocking on doors for Warren showed how those nagging electability concerns were alive and well.

“I talked to a lot of people today who really, really like you,” said Kristen Marttila, a lawyer who had traveled from Minneapolis. “They might even like you the best, but they are really scared to vote for who they like the best, because they’re worried that not enough people feel the same.”

Undecided voter Michael Marth, 68, told Reuters that he believes Warren will “scare off a lot of voters.” His wife said, “she probably likes Warren the most but will likely end up in Biden’s camp,” so the country can “get rid of Trump.”

Warren has started to address these electability concerns at her rallies. She said in Mason City that many “people just want to beat Donald Trump,” but “[F]ear doesn’t win, courage and vision win.” She believes “business as usual” will not beat Trump.

Warren pointed out her defeat of Sen. Scott Brown (R-MA) in 2012 in an attempt to show she’s electable. This means she is “the only person who will be on the debate stage who has beaten a popular Republican incumbent Republican any time in the last 25 years.”

Support for Warren among minorities has slipped along with females. She maintains strong support from Democratic boogeymen: white and older progressives.

Warren brought out former HUD Secretary Julián Castro in Iowa, who threw his support behind her after he dropped out of the race:

She was joined in Iowa by surrogates to help her broaden her appeal. Julian Castro, who dropped out of the 2020 race earlier this year, campaigned with her Sunday in Marshalltown, where more than a third of the population is Hispanic. Castro pitched Warren as a unity candidate who could bring together a diverse coalition.

“She knows what it’s like to struggle,” said Castro, who served as Housing and Urban Development secretary in the Obama administration. “She’s about making sure that no matter who you are in this country that you have a fair shot. She can bring this party together.”

Warren has also attempted to cast herself as a uniter with the ability to bring together progressives and moderates. You know, despite having far-left ideas:

Warren largely stuck to her campaign message at her events in Iowa this weekend: fight corruption, take the influence of money out of Washington and push for “big structural change” to America’s economic system to address issues affecting working-class families.

To convince voters that her plans are viable, Warren recalled the challenges and opposition she faced from banks when she pitched her idea for the Consumer Financial Protection Bureau during the Obama administration.

“Why can’t you make it happen? Because it hasn’t happened before?” Warren asked the crowd at a town hall in Mason City. “Well, here’s my view of the world: It’s going to happen now because it has to happen now. This country is in a crisis.”

Biden and Buttigieg, the two leading moderates in the field, have questioned whether more liberal candidates like Sanders and Warren will cost the party in November. Biden in particular has asserted that he can win back the traditionally Democratic white, working-class voters who defected to Trump’s side in 2016.

To me, it’s not just Warren. It’s also Sanders.

In all honesty, I don’t know how people can like Warren or Sanders. They come across as know-it-alls who refuse to listen to other ideas. It seems like it’s their way or the highway. They are our “betters” and knows what is best for everyone.

I was thinking EXACTLY that.

notamemberofanyorganizedpolicital in reply to 2smartforlibs. | January 13, 2020 at 5:12 pm

Yea the problem is that since defeating Scott Brown, the nation has gotten a chance to know her.

“found” votes in the backs of station wagons.

Well, Biden might be more electable thank Warren but I think a better way of saying it is, “slightly less unelectable.”

Every one of the Dem candidates is about as identical as a line of bowling balls, each with different wigs. (except for Booker) They all believe in the same Democratic platform ideas of high taxes, massive government takeovers in medicine and the environment, gun restrictions, abortion on demand, et al…

They’re going to pick one of the clones, build a focus-group tested image for him/her, and proceed to flog a billion dollars worth of advertising in the hopes of confusing the American electorate and smearing Trump.

notamemberofanyorganizedpolicital in reply to georgfelis. | January 13, 2020 at 4:06 pm

If “Dims” “proceed to flog a billion dollars worth of advertising” and nobody watches them, do they still stink?

The entire Democrat field is competing for next year’s #1 draft pick. No point analyzing their game plans if you believe it’s about winning.

The biggest problem with the Democrats is they have no responsible adult supervision.

That or their supervision has grown so old that it has sunk into a kind of political dementia.

One of the great things about Warren and Sanders is that they both espouse so many cockamamy ideas that they insult almost every segment of society. There are areas that appeal to small segments but then the whole pie chart emerges and they get to see right next to “Free college” something like “No new home construction unless the home has zero carbon footprint”. WTF? Does this harpy know what that even means? “Medicare for all” next to “No borders”! WTF? Who would pay for it? If Trump doesn’t do some terrible thing in the next few months we are looking at a landslide.

She beat a Republican in MA in a presidential election cycle with 53.7% of the vote and outspent him by 50%.

Keep in mind that Brown won his seat in a special election with a total vote count of a little over 2.2M votes. When Warren beat Brown there were almost 1M more votes cast in a state that consistently votes D.

Not to mention that Scott Brown ran specifically as being the vote that would deny Obamacare in the Senate. That he was able to succeed for that reason in deep blue Massachusetts should have told everyone what a loser it was.

She’s a poser and more people are seeing it. Seems like she is repeatedly being caught in some lie about her past as well. She doesn’t have the backbone to lead a horse to water let alone to lead the country 🙂

I disagree. She will get a spot on Mourning Woe, or, The Henhouse The View.

It would have to be The View. I can’t imagine even Joe tolerating her nail-on-chalkboard voice and staccato hand movements.

She reads like the ad copy for a Craigslist scam.

She thinks America at large is a pleasing likeness of Massachusetts, eh? She left Oklahoma a long, long time ago it seems.