Davos discussions include impact of Wuhan Virus on employees and the global economy. 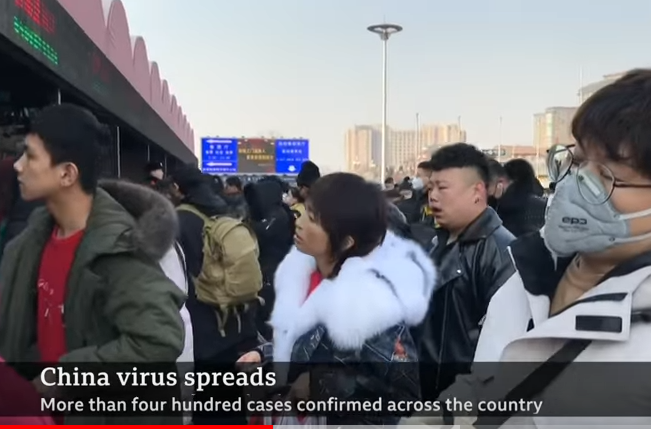 We have been following the reports related to the outbreak of a pneumonia-like illness caused by a coronavirus that reportedly comes from the markets of Wuhan, China.

Now the Chinese government has quarantined Wuhan and plans to shut down the airport and public transportation.

The virus has been linked to at least 17 deaths and has sickened over 500 others.

Xinhua News Agency said on Thursday that the city had asked people not to leave Wuhan without specific reasons, with the People’s Daily newspaper then tweeting that no one would be allowed to leave the city starting at 10 a.m. and that train stations and the airport will shut down. It said that city buses, subways, ferries and long-distance shuttle buses would also be temporarily closed, citing Wuhan authorities.

Other countries’ health agencies and governing bodies have issued warnings to travelers, including the U.K., which advised against “all but essential travel” to Wuhan, which is where the virus was first detected. Several countries have implemented enhanced screening measures at airports for flights arriving from the Wuhan region as China faces scrutiny over what officials knew about the outbreak and when they discovered it.

So far, several Asian nations have identified 555 cases as well as one American from Washington state. The Seattle area patient had traveled recently to China and arrived at Seattle-Tacoma International Airport one week ago.

According to Dr. George Diaz, the head of the infectious disease program at Providence Regional Medical Center, the patient is isolated and will remain so until officials at the U.S. Centers for Disease Control and Prevention say it’s OK for him to be released from isolation.

Diaz spoke to ABC News on Wednesday about the patient and what his daily life and routine is like now that he has become the country’s first patient with the mysterious virus.

The World Health Organization (WHO) has not yet declared the virus a “public health emergency of international concern.” However, the organization’s emergency committee announced they need more information before they report the status of the outbreak and what recommendations they should issue. The group should re-review the status again on Thursday.

The Wuhan Virus was also a topic of discussion at the World Economic Forum in Davos, Switzerland.

The discussions in Davos have focused, in part, on the impact the virus could have on the livelihoods of the citizens of China and people around the world if it turned into a pandemic, the people said. The talks also covered how leaders would manage their businesses amid the upcoming Chinese New Year celebrations and beyond. The holiday is one of the busiest travel days in China.

Many companies, including big financial institutions J.P. Morgan, Citigroup, Morgan Stanley and Bank of America, have offices in China and employ thousands of people there. While these American banks have yet to issue any warnings about the virus, a Europe-based financial institution has issued guidance to its staff as the virus spreads, according to a person at the bank participating in the World Economic Forum. This executive declined to be named or disclose the name of the bank issuing the guidance, given the sensitivity of the matter.

“We are advising staff to be aware of the situation, close monitoring is in place, and staff health and safety is our top priority,” the bank executive said.

“Now the Chinese government has quarantined Wuhan and plans to shut down the airport and public transportation.”

This is drastic … my hunch is China isn’t telling all, and things are much worse than we are being told.

I always expect the Chinese government to be holding back information.

Maybe it’s a Zombie plague too.

I’ve heard that the worst part of this virus is that 24 hours after death, the victims arise from their graves and start wandering the countryside, searching for brainzzzz….

I would not be surprised if China’s government was understating by one to five decimal places. China has already locked down four more cities.

Yeah, like quarantining one or two cities is going to solve the problem.

You go to war with the weapons you have. Quarantining a couple cities where we know the flu is most common will not stop the spread of the flu…but it will slow it down, and slowing it down buys research time to develop a possible vaccine. Will a vaccine be possible? Who knows, but there are vaccines for other flus.

Well, 17 people out of 7 billion have died. Now that what I call a raging pandemic!!!

We do not know that the death number is accurate, we do know that the rate of infections is rapidly growing. It is foolish to dismiss the risk.

also, I would imagine that in a pandemic situation, those who sicken first have the best chance of surviving, as caregivers are fresh and supplies are “unlimited.” In the height of the situation would be the worst, since almost everyone is sick, those who had it first are still recovering strength, and those without are hunkered down somewhere safe. Oh, and supplies are limited.

The percentage chance of contracting the virus is quite low, but if it happens to you it’s 100%.

“all but essential travel”

“Essential travel” spreads as much disease as every other kind of travel.

This article has some interesting points about the disease and the progress – https://www.statnews.com/2020/01/22/the-basics-what-we-know-and-dont-know-about-the-virus-spreading-in-china/

The authors suggest that China probably made a huge investment in infectious disease science since the SARS problem in 2002-3. They seemed to have identified the virus faster and shared the genetic sequences with more organizations.

An interesting paragraph from the article:

“By looking at the rate at which coronaviruses mutate — their evolutionary clock — Rambaut has estimated when these viruses started infecting people.

“The sequence evidence suggests that the virus first cropped up in humans very, very shortly before the outbreak was identified,” Rambaut said, pointing to early December. The Chinese reported the outbreak to the WHO on Dec. 31.

That suggests a remarkably finely tuned surveillance system, he said — all the more impressive because these unusual pneumonia cases were occurring during cold and flu season, when pneumonia is pretty common.”

Officials are now monitoring a student at Texas A&M university who traveled to the region, is showing some possible symptoms, and may have contracted the illness while there.