Confirmed cases are surging in China. WHO will meet this week to determine if they need to declare a public health emergency. 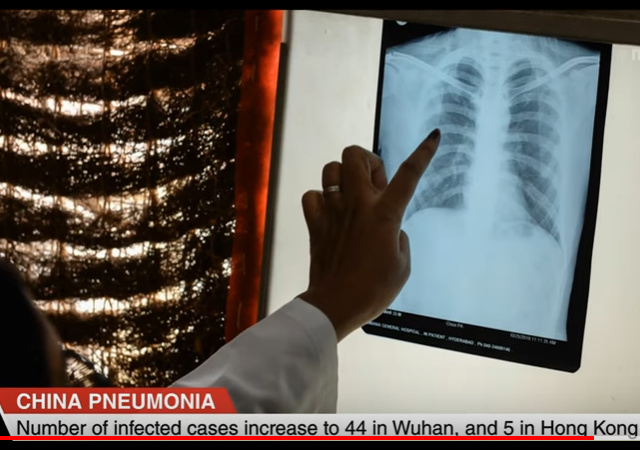 Last week, I reported that Chinese public health officials were struggling to identify a mysterious strain of pneumonia that has infected dozens of people and had placed the rest of Asia on alert for outbreaks.

Now, CNN is reporting that Centers for Disease Control and Prevention (CDC) is expected to announce that the first case of Wuhan coronavirus has been reported in the United States, in the state of Washington.

The source is involved in the matter and was made aware of a CDC media briefing scheduled for later today.
The novel virus, which was first identified last month in Wuhan, China, has so far infected more than 300 people and killed six, in an outbreak that has been reported in five countries — now including the United States.

It is unclear if this person recently traveled to China, where and how they became infected, and if this person has transmitted the virus to anyone else in the United States.

It’s a highly unusual step. The last time the CDC did routine passenger health screening was during the 2014 Ebola outbreak, according to Dr. Martin Cetron, director of the CDC’s division of global migration and quarantine.

The pathogen that hails from the Wuhan area of China is reported to be a new strain of coronavirus (and is now denoted 2019-nCoV). Coronaviruses have been linked to other serious disease outbreaks in recent years.

Chinese authorities report most patients in the Wuhan City outbreak have been epidemiologically linked to a large seafood and animal market, suggesting a possible zoonotic origin to the outbreak. Chinese authorities additionally report that they are monitoring several hundred healthcare workers who are caring for outbreak patients; no spread of this virus from patients to healthcare personnel has been reported to date. Chinese authorities are reporting no ongoing spread of this virus in the community, but they cannot rule out that some limited person-to-person spread may be occurring. .

There are now reports that the number of cases is surging in China.

>The number of people known to have been infected with the coronavirus jumped Monday to over 200 from 62, with new cases reported in China’s capital and other Asian countries.

Over the weekend, a third patient in the region died of the pneumonia-like virus, bringing the death toll to three.

Authorities in Wuhan, where coronavirus appears to have originated, said 136 new cases have been confirmed in the city in central China. As of Monday, there were a total of 198 infected patients in Wuhan, bringing the worldwide total to more than 200.

There are troubling reports that healthcare workers are being infected. The World Health Organization is planning a Jan. 22, meeting to determine if the situation should be classified as a public health emergency.

A Chinese health official said today that 14 healthcare workers have been infected with the Wuhan-linked novel coronavirus (2019-nCoV), bolstering evidence of human-to-human spread and spurring new questions about virus circulation against a backdrop of other winter respiratory illnesses.

In addition, South Korea early this morning reported its first 2019-nCoV case, as the number of outbreak-related cases grew in other Chinese cities, including Beijing and Shanghai, pushing the nation’s total to 218.

The quickly evolving outbreak prompted the World Health Organization (WHO) to announce that it will convene an emergency committee on Jan 22 to see if developments warrant a public health emergency of international concern under International Health Regulations.

Several other Asian countries are also screening passengers from Wuhan, though identifying potentially infected individuals during cold and flu season will be a challenge.

In Asia, authorities in Singapore, South Korea, Taiwan and Thailand have stepped up monitoring of passengers from Wuhan at airports. Indonesia, Malaysia and the Philippines say they have strengthened screening at all points of entry in response to the outbreak, as well.

But Alexandra Phelan, global health legal expert at Georgetown University’s Center for Global Health Science and Security, said such screening may be insufficient in preventing the virus from spreading as its symptoms, which include fever, cough and difficulty in breathing, are “quite general”.

“There are likely to be many individuals with matching symptoms due to an illness that is not 2019-nCoV,” Phelan said, referring to the new virus.

“In Asia, authorities in Singapore, South Korea, Taiwan and Thailand have stepped up monitoring of passengers from Wuhan at airports. Indonesia, Malaysia and the Philippines say they have strengthened screening at all points of entry in response to the outbreak, as well.”

Apparently, it’s neither racist nor xenophobic to enforce the lawful entry of foreign nationals across sovereign borders…if you’re not the USA.

What would Ralph Northram do?

Erect a cage and tell the virus it is restricted to that area.

And Los Angeles and JFK.

Yeah, those were mentioned above. They’ve also added Atlanta.

This should be paid attention to.

I am afraid that screening is probably too late. Quite a few years ago I installed ultraviolet fluorescent “C” bulbs in cold air returns of my home and office space. It kills airborne pathogens. I have not checked to see if there is an LED version of these, but if available they should be used in new installations. LI readers doing this should be careful to not expose their skin or eyes to UVC, it will cause damage in a short time.