Potential cases being investigated in LA and Texas. Eight Chinese cities with a total population of 18 million now quarantined. 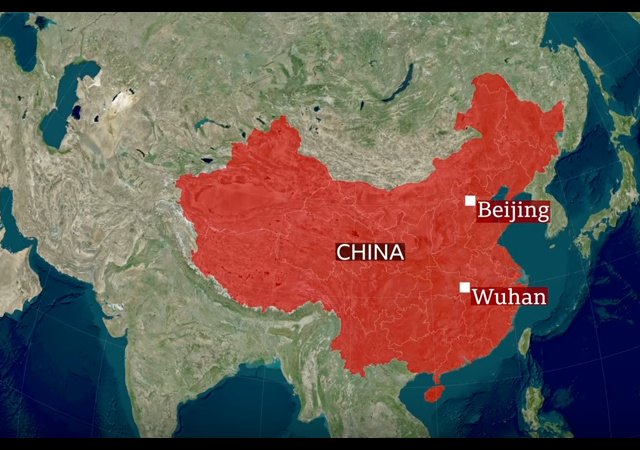 There have been some significant developments today related to the reported outbreaks for the Wuhan coronavirus, which can cause a life-threatening pneumonia-like illness.

Officials in the Chinese capital have scrapped events including temple fairs – which can attract thousands of tourists.

Residents have been urged to ‘strengthen prevention’ against the virus, which has killed 17 and potentially infected thousands.

Almost 600 people have been confirmed to have the virus, with cases recorded in the US, Singapore, Thailand, Japan, South Korea, Hong Kong, Taiwan and Macau – as well as China.

In a post on China’s Twitter-like platform Weibo, Beijing authorities added that the move was to help epidemic prevention and control.

We reported that Wuhan, the city that is the epicenter of the disease, had been quarantined by Chinese public health officials. Now, eight cities with a total population of 18 million are on a transportation lock-down.

Meanwhile, Chinese authorities have imposed travel bans on more cities in Hubei province and announced the allocation of funds to fight the spread of illness that has infected at least 647 people.

Eight cities in Hubei – Wuhan, Huanggang, Ezhou, Chibi, Xiantao, Qianjiang, Zhijiang and Lichuan – are now subject to travel bans, according to notices released by local governments in the province.

…Hubei authorities also have suspended operations at local travel agencies and ordered all schools to postpone the start of spring semester classes, according to the newspaper, a Chinese Communist Party mouthpiece.

China’s finance ministry on Thursday announced the allocation of 1 billion yuan (US$144 million) to be used by Hubei authorities to halt the spread of the illness.

In addition to the Washington state patient receiving treatment in Seattle, more potential coronavirus cases are under investigation:

Researchers, who have been investigating this virus since reports of a mysterious pneumonia-like illness broke late last year, may have identified snakes as the pathogen’s potential origin.

Using samples of the virus isolated from patients, scientists in China have determined the genetic code of the virus and used microscopes to photograph it. The pathogen responsible for this pandemic is a new coronavirus.

The World Health Organization is still reluctant to declare this an international public health emergency.

Such a declaration can bring more money and other resources to fight a threat but can also trigger economically damaging restrictions on trade and travel in the affected countries, making the decision a politically fraught one.

The decision “should not be taken as a sign that WHO does not think the situation is serious or that we’re not taking it seriously. Nothing could be further from the truth,” WHO Director General Tedros Adhanom Ghebreyesus said. “WHO is following this outbreak every minute of every day.”

But while the epidemic was clearly a crisis in China, “it has not yet become a global health emergency. It may yet become one,” he added.

i am reminded of this tidbit from the end of Animal House.

A passenger from Mexico City arrived in Los Angeles via LAX and was transported to a nearby medical center for disease control, after showing symptoms requiring medical attention upon arrival.

The interior of a plane is one of the best ways to spread an airborne contagion.

“On most aircraft, air is also circulated through hospital-grade HEPA filters, which remove 99.97 percent of bacteria, as well as the airborne particles that viruses use for transport (many regional jets lack these filters)” Some also us UVC light to kill bacteria and viruses.

Even with these in use, they cannot protect us if we are sitting in close proximity to someone who is infectious.

What it will take to stop the Wuhan coronavirus (opinion) – CNN https://www.cnn.com/2020/01/24/opinions/wuhan-coronavirus-china-strategy-garrett/index.html

Another article: Welcome to the Belt and Road Pandemic
https://foreignpolicy.com/2020/01/24/wuhan-virus-china-belt-and-road-pandemic/

“But while the epidemic was clearly a crisis in China, “it has not yet become a global health emergency. It may yet become one,” he added.”

translation: once it gets out of control, we will take steps to contain it…

It sounds to me like it is already out of control in China.

The Chinese New Year celebration is the biggest Human Migration in history. Close to 3 billion trips were expected to be made during this period.

Wujan is home to a large WHO “reference laboratory” established to house and study dangerous pathogens.

There’s your “snake”. The SARS virus has escaped from high-level containment Beijing labs several times. Is that what is happening here?

I read yesterday that the government has issued stark warnings to anyone who is caught covering up information on this new virus so it seems there may be cause for concern.

We used to be advised to get a flu shot every year. Now we need those flu shots plus the annual WHO-sponsored flu shot for the latest “global threat”. If you were China, would you trust the UN placing such dangerous “reference labs” in your country? Just askin’.

Interesting that the UN refuses to call this a health crisis. I previously watched a few of the videos being circulated about people dropping in the streets and the ones I watched had a weird staged feel. Didn’t think much of it at the time because clearly, there is a real thing going on. But in a country teetering on financial collapse, it is certainly useful and convenient to have an excuse cancel so many very expensive fireworks displays.

And to be clear, not saying this is a hoax, but in a country that would normally use its power to downplay a crisis, I find it interesting the government is giving warnings about downplaying it, combined with the UN refusing to call it a crisis. Never let a crisis to go to waste as they say and it must cost Mega Mega Meg’a dollars for Chinese New Year displays! We will see how they act after the NewYear celebrations and if the publicity immediately evaporates….

Regardless of whatever the Chinese government decides–
祝大家恭贺新禧，万事如意！ I wish all a happy new year (year of the rat) and best wishes!