“This is the absolute best case scenario and at this point in time, the best we could’ve possibly hoped for.” 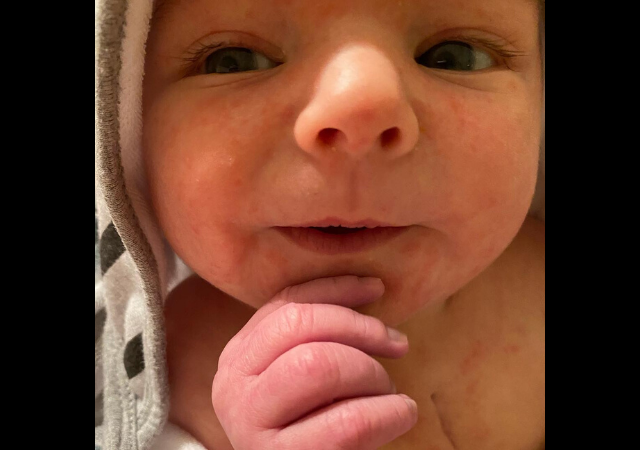 Baby Walt was born November 24 via emergency c-section. Shortly after his birth, he was diagnosed with a rare heart condition and life lifted to Houston’s Medical Center.

December 9th, Walt had surgery to treat patent ductus arteriosus and repair the right atrium, both of which were exacerbated by his heart condition. Since then, we’ve been spared (he’s been spared) any further instance of literal life-threatening scare. The surgery was as great a success as it could be. Better even.

On Monday, December 30th five weeks and one day after entering the world, Baby Walt left the hospital and joined us at home.

We met with the Cardiologist last week. There have been so many doctors, I had no clue that this one was one of the first if not THE first to have helped Walt and was the one who insisted Walt be life flighted immediately after birth.

I introduced myself and Walt and he explained that he was well aware of Walt’s case. He’d been working with the surgical team and other physicians throughout Walt’s hospital stay. It was nice to not have explain everything yet again, but even better that this doctor seemed genuinely interested in and passionate about our son’s wellbeing.

We spent three hours at the doctor, which is a lot of time with a 7-week-old, but after an extensive echocardiogram, the Cardiologist said he couldn’t believe it was the same kid. “This is the absolute best case scenario and at this point in time, the best we could’ve possibly hoped for. I’m incredibly pleased.”

There are a few things to keep an eye on as Walt grows, but God already has those bits taken care of.

All praise and glory to God our Father who is working miracle after miracle and continues to do amazing things in our son and our family. His faithfulness in the smallest details of this ordeal has been truly incredible. We are blessed, grateful, and humbled by His goodness and the prayers and kindness of those we know and many we don’t.

Until the next great Walt report… My prayer for each and every one of you is Numbers 6:24-26:

24 The Lord bless you and keep you;
25 the Lord make his face to shine upon you and be gracious to you;
26 the Lord lift up his countenance[c] upon you and give you peace.

Onions. It must be the onions.

May he have all the joys of a perfectly normal childhood.

That picture is the cutest thing.

Baby Walt maybe one day you can read this, you are powerful don’t ever forget that. Any kiddo that can make a big dude like me tear up, that’s power buddy.

Glad he is doing so well, God is Good, all the time.

Oh yea, Walt this is for when you are older…Chicks dig scars, own it little brother.

Well to you and Walt.

BTW.
The Benediction is the oldest prayer for either Jews or Christians. It is the only prayer given from God.

Which explains why it always resonates so deeply, I suppose.

So thrilled to hear this! May God continue to bless you and your family.

God’s blessings to all involved.

I’ve been a reader of this site for years now so I’m glad he’s doing well!

I looked at that face and immediately saw Joey from friends; “How you doin’?!?

If that isn’t he face of a future ladies man, I don’t know what is, lol.

When I first saw it, I immediately thought of Rodin’s ‘The Thinker’. He seems to be pondering something deep.

Or, maybe he IS thinking about girls already, thus the sly little smile. ?

I thought he might have been watching Adam Shiff on television.

That’s so kind. And thank you 🙂

Hard to see what I’m typing through my tears!

May our Lord continue to bless you and the wee one!

Thank you! I have so many stories through all of this of how every single issue that came up was taken care of as soon as it arose. Walt was in the absolute best place, with the best care, and the best physicians for his condition. Through it all, we’ve been tucked under His wings. In fact, the day he was born and flown to the medical center, I had Psalm 91 written on a piece of paper and taped to the inside of his little bed above his head. That little paper that said “Psalm 91” remained attached to his bed throughout his hospital stay.

Wonderful news, thank you for sharing as always.

Walt is such a cute little guy! He looks very curious in this picture, ready to inspire his Mom if she gets writer’s block.

Blessings to Walt, Kemberlee and the whole family!

I’m so very happy for you.

Thanks so much. We are tremendously blessed.

It’s a cold, foggy, drizzly day here in NW Ohio, this excellent news of Walt made everything sunshine and warm breezes. Praying for continued wellness! Bless you all.

Thank you for your prayers and blessings to you and yours!

Something about your testimony reminds me of that wonderful old poem “Footprints in the Sand”. Until now, I’ve never considered that being carried through the difficult times could be the Father inspiring a community effort. Thanks for the update, Kemberlee. 😉

I have never experienced the body working in concert like I have through all of this. It has been life changing in so, so many ways, and through it all, we have been blessed time and time again by our friends, family, and so many strangers whose prayers and encouragement gave us life when we needed it most.

That picture is fabulous. There is the dickens in that adorable face,,, which is exactly what little boys are made of,,snakes and snails and puppy dog tails..

He is just the sweetest little thing.

Here’s a lullaby for your little boy:

You’ve come along way, baby. So cute! Keep up the good work, mom and dad.

It won’t! And they adore him. He is very loved.

Oh my goodness…..what a cutie. I, and, I am sure many others are wondering what in the world Walt is contemplating ;-))

Heaven’s Blessings and I wish you a wonderful journey Master Walt!!

Outstanding!
My heartfelt good wishes to the wee lad. So very happy for you!

A cutie! I’m happy to hear everything is going so well.

So very very happy for you and Walt! This is wonderful news! God is good. Prayers on Walt’s behalf will continue.

He’s got the sweetest little face!

Congratulations on the wonderful news.

Had we had a third son, I would have named him Walter after the man who was a replacement for my father who left me when I was weeks old. He stepped into my life when he saw a single mother struggling to teach her son how to be a man.

Your Walter has the heart of a warrior. Now comes the time for him to grow up into a godly ruler.

“I will confirm it by blessing them.”

Hold on to that promise and enjoy the next 18 years as the Lord fulfills His promises in Walter and all y’all. You are in Good hands with the Almighty.

Amen and Amen. And thank you for your message. Truly. It blessed my heart greatly.

Walter was the first name I suggested when we found out he was on the way. Spent a lot of time praying about what to name him, as names bear great significance. When I looked up what Walter meant, “ruler of armies,” I knew it was the right name for this kiddo.

It’s weird. I am very happy for you, and I mean it.

Ask me later. I don’t want to dilute the happiness.

I got to look at a picture of one of God’s blessings. Thank you.

And thank the Lord for his faithfulness. Blessings to you and yours.

Amen. Have learned a great deal about faith through all of this.

The eyes…wow. How old is this kid?

This kid is truly special.

That’s fantastic. And what a cutie!

Good news as we continue to keep in our prayers.

Thank you so much. Means an awful lot to us.

Fantastic!
May God continue to bless you and little Walt (who will someday be big Walt).

Thank you and blessings to you!

Walt is one of God’s “Biggest Little Hero’s. Such a beautiful precious little boy. He will continue to be in my heart and prayers. His first two months on earth have been such a miracle. Our Lord has wonderous plans for him. Stay strong Mom and Dad you have a gift from God and he is trusting you both to show the way as he grows.

Great, interesting, engaging pic of Walt that shows him pondering, as though he is older than his young age. Glad to hear all the good news!

Haha, right? I think he looks like me too!

re: “All praise and glory to God our Father who is working miracle after miracle and continues to do amazing things in our son and our family. His faithfulness in the smallest details of this ordeal has been truly incredible. We are blessed, grateful, and humbled by His goodness and the prayers and kindness of those we know and many we don’t.”

Amen! The Lord knows us all intimately, from the beginning to the end.

“You know when I sit and when I rise; you perceive my thoughts from afar. You discern my going out and my lying down; you are familiar with all my ways. Before a word is on my tongue you know it completely, O LORD. You hem me in–behind and before; you have laid your hand upon me. Such knowledge is too wonderful for me, too lofty for me to attain. Where can I go from your Spirit? Where can I flee from your presence? If I go up to the heavens, you are there; if I make my bed in the depths, you are there. If I rise on the wings of the dawn, if I settle on the far side of the sea, even there your hand will guide me, your right hand will hold me fast.” (Psalms 139:2-10)

May God bless you and keep you. All the very best for Baby Walt.

I wish I had a chance to see y’all over there. I was taking my mom to cancer treatment at the nearby MD Anderson. It was tough on us. But she’s much better now, thanks.

I’m so glad to hear your mom is better. Blessings to you and yours.