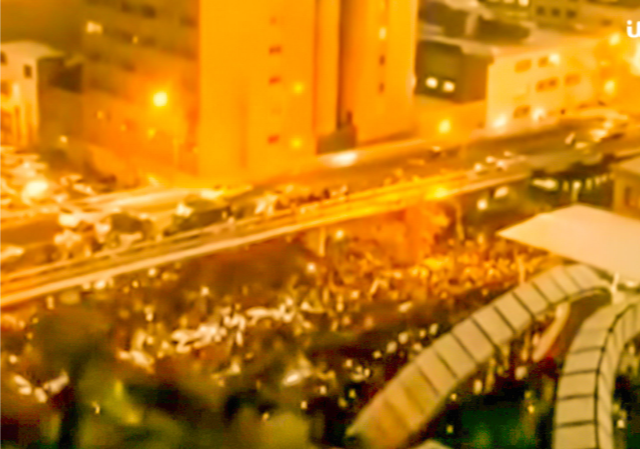 Anti-regime protests have reignited in Iran’s capital Tehran and elsewhere in the country after the regime admitted shooting down a civilian Ukrainian airliner, killing all 176 Iranian and foreign passengers on board. The epicenter of the protests was Tehran’s two main universities. Several Iranian university students were among those were killed in the incident.

Crowds chanted “We don’t want an Islamic Republic” and called for “Death” to Iranian leader Ayatollah Khamenei and the his band of corrupt Muslim clerics running the country.

Many Iranian have been angered by the hypocrisy displayed by the Mullah regime. While the rulers in Tehran have been parading the coffin of the notorious terrorist Qassem Soleimani, killed in a U.S. drone strike for plotting attacks on American embassies in the region, they has been trying to sweep the death of innocent passengers of the Ukrainian airliner under the rug. Visual evidence showed Iranian workers bulldozing the crash cite and removing the debris in a failed cover up.

Students outside Tehran’s Amirkabir University shouted “I will kill those who killed my brother,” flipping the recent calls to avenge Soleimani and turning it against the Islamic regime.

Reports coming from Iran via social media indicate protests that began earlier in the afternoon in the capital Tehran spread to several other cities.

Around 5:00 pm local time hundreds of students and others gathered in front of Tehran’s Amir Kabir and Sharif universities this January 11 to protest against the regime’s deception of the public about the Ukrainian airliner that the Revolutionary Guard shot down on Wednesday.

The rallies were called by students yesterday who said in their statements they were going to mourn the victims of the plane crash and light candles for them.

Among the victims of the plane crash there were 26 alumni of various Iranian universities.

Videos posted on the social media showed protesters chanting slogans such as “Liers, liers”, “So many years of crime, down with Supreme Leader, “Shame on Revolutionary Guard, Leave the country alone” and “Down with dictator”.

Today’s anti-regime demonstrators are chanting in favour of 1500 people the regime killed in November during #IranProtests.

Make no mistake. The West should listen to these people, not regime-orchestrated pro-Soleimani rallies.

Video of Iranian protesters in #Tehran refusing to step on #US and #Israel flags.

As courageous Iranian men and women took to street last night, U.S. President Donald Trump warned the regime against staging another bloodbath. “The government of Iran must allow human rights groups to monitor and report facts from the ground on the ongoing protests by the Iranian people,” he wrote on Twitter.

In contrast to the response shown by leading Democrats and mainstream media at home, President Trump appears to have gained popularity in Iran for taking out country’s most dreaded terrorist. President’s tweet garnered quarter of a million likes, becoming the most favorited Farsi language tweet in the history on social media.

President Trump again tweeted early Sunday, telling the Iranian regime to refrain from using violence against protesters. “To the leaders of Iran – DO NOT KILL YOUR PROTESTERS,” he said. “Thousands have already been killed or imprisoned by you, and the World is watching. More importantly, the USA is watching.”

Iranian regime killed more than 1,000 people while quelling the anti-regime protests that began in November, the U.S. State Department estimates. Iran’s Islamic Revolutionary Guard Corps (IRGC) and regime loyalist militia deployed helicopter gunships, machine guns and snipers against unarmed demonstrators. Around 7,000 people have reportedly been thrown in prison for speaking out against the regime in those demonstrations, according to UN sources.

The government of Iran must allow human rights groups to monitor and report facts from the ground on the ongoing protests by the Iranian people. There can not be another massacre of peaceful protesters, nor an internet shutdown. The world is watching.

“The voice of the Iranian people is clear. They are fed up with the regime’s lies, corruption, ineptitude, and brutality of the IRGC under [Ayatollah Khamenei’s] kleptocracy,” U.S. Secretary of State Mike Pompeo tweeted on Saturday. “We stand with the Iranian people who deserve a better future.”

To the leaders of Iran – DO NOT KILL YOUR PROTESTERS. Thousands have already been killed or imprisoned by you, and the World is watching. More importantly, the USA is watching. Turn your internet back on and let reporters roam free! Stop the killing of your great Iranian people!

The State Department is urging the European countries to stand with the people of Iran. “We are asking our European friends and government allies to speak publicly and clearly in support of the Iranian people. Now is the time to be clear about protecting human rights,” the U.S. ambassador to Germany, Richard Grenell, tweeted.

Deeply disturbed by videos showing people at Amirkabir University in Tehran being beaten and tear-gassed. Their chants are against the state’s incompetence and cruelty. Iranians have constituonal right to peaceful protest without threat of state violence. pic.twitter.com/fwRvQnViI0

Far from condemning or sanctioning the Iranian regime for the war crime of shooting down the civilian airliner, the European Union foreign ministers ghttps://twitter.com/Amreen__Rizvi/status/1216310795585241088athered in Brussels to ‘save’ the Iran nuclear deal. The Obama-era deal “is not dead,” French Foreign Minister Jean-Yves Le Drian declared.

With Tehran, by its own admission, enriching weapons-grade uranium, the EU’s chief foreign policy commissar, Josep Borrell, invited Iranian Foreign Minister Javad Zarif to Brussels for “talks”. Not letting the EU beat him at appeasement, German Foreign Minister Heiko Maas offered direct talking with the regime that just butchers over a thousand of its people and shot down an airliner.

Another meaningful protest video from Iran.

Iran’s Revolutionary Guards (IRGC)often boast about fighting against the ISIS.

But in Iran, they impose an ISIS-style philosophy.

It looks as if the Iranians have replaced the Demorat party when it comes to freedom-loving people! The citizens of Iran are cheering the death of the monster Soleimani but the Dems are mourning him! WTF is going on in the Demorat party?

The Demorat party is no longer. It has fully transformed into the Communist Party USA. Death To America is now their slogan. Ironic in light of this story from Iran.

The new mantra of the Democrat party is that any event that portrays Trump in a positive light must be condemned even if it means siding with the Ayatollahs of the world.

Likewise, any person who makes any statement that in any way supports Trump or his policies must be condemned, dox’d, removed from his or her job and possibly pursued criminally.

A tipping point? Let us hope.

No totalitarian regime has ever willingly given up its power over the people.

[The following is to be repeated, but only in a whisper]

Shhhh, the cause is Islam. But don’t tell anyone such as the Palis or Linda Sarsour. You’ll be accused of Islamphobia.

Interesting to see all those Islamophobic Iranian students protesting in the streets.

Shame on them. Right Linda, Ilhan and Rashida?

BINGO! You stole my thunder. We’ll throw in John Kerry as a bonus.

The Iranian people are now refusing to step on the American or Israeli flags. https://twitter.com/alexbruesewitz/status/1216370012497248257

Incredible moment Iranian students refuse to step on US and Israeli flags amid anti-government marches as Trump warns the country’s leaders not to kill its protesters https://www.dailymail.co.uk/news/article-7878729/Iranian-students-refuse-step-Israeli-flags-Trump-warns-not-kill-protesters.html

I honestly wonder how much of these protests arn’t actually encouraged by the mullahs. Here me out here…
The mullahs have watcjed the US’ and the West’s general response to dictatorship regimes where the people are oppressed. They never get steamrollered as those oppressed peoples are effectively human shields for them knowing that the westernized countries won’t have the stomach to invade or bomb the crap out of the country in general to stop them. Factor in the distaste for any protracted Middle East engagement, allowing the people to riot shows the world there are still “innocent people” and Iran has to be dealt with the hard way.
At least they will keep allowing these demonstrations until they have ballistic mussle nuke tech working well enough to threaten other countries as deterrent effect.

But seriously, when one steps back and takes a look, our constitution is still in place and that is because we have the 2nd amendment to back up the first.

For now.
Virginia is the test case.
Pray for them.

I’m confused. The video I watched, i saw them walk on both the Israeli and US flags.

You didn’t see everyone. A majority are clearly making sure to walk on the sides of the flags to avoid stepping on them.

That’s a big thing in that country and it sends a message to the government.

The EU is proving itself irrelevant as is the liberal democrat media and left wing political parties all over the west.

BUUUUUT you can see why they ar all doing as much as possible to prop up the mooolahs cant you? If they were to fall it would show EVERYONE just how wrong they have been all along and just how much the also got Trump wrong!

And that is probably the bigger sin. They would much rather the mooolahs stayed in power just so Trump wont be proven right!

This is encouraging, people fed up with Islam, on the other hand, what percentage of Islamists does it take to make recovery of Iran nearly impossible?

Separation of Chamber, Mosque… and State.

The government is armed with automatic weapons and tanks. It’s far harder pulling off a successful revolution today than it was in 1776.

“Iranians have constituonal right to peaceful protest without threat of state violence.”

No, they don’t and that’s the point. Under the current regime they have no rights except the right to shut their yaps and do what they’re told, or die.

What rational person wouldn’t want to live in that theocratic paradise?