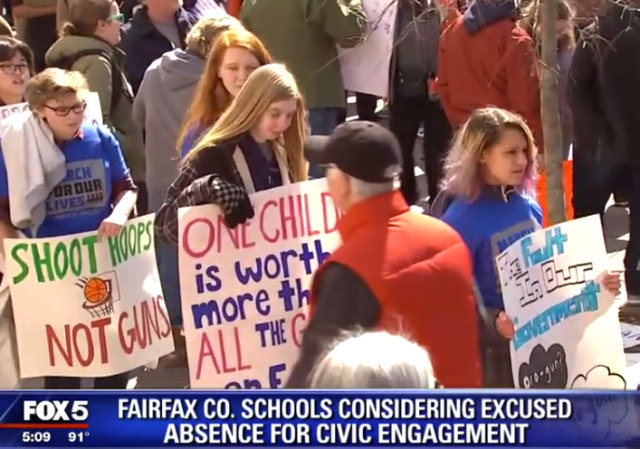 Protests have become commonplace on college campuses, and they can happen for almost any reason. Now one county in Virginia seems intent on bringing this same tired spirit to middle schools and high schools.

Students at Virginia’s largest school district will soon be able to take a day off every year to participate in protests.

Fairfax County Public Schools in Northern Virginia has adopted the policy for students in seventh through 12th grades, NBC4’s news partners at WTOP report. Students will get an extra excused absence every year for “civic engagement activities.”

Those activities can include marches, meeting with local leaders or other types of involvement in the community.

This Associated Press report via NBC News makes it clear that this is a test run for a national policy:

Fairfax County Public Schools in Virginia plans to start allowing the absences Jan. 27, 2020, news outlets reported. The district is the largest school system in the state.

Students in seventh through 12th grades can use the day for “civic engagement activities” such as attending marches or meeting with lawmakers, according to district spokeswoman Lucy Caldwell.

The new policy was introduced by Fairfax School Board member Ryan McElveen, according to The Washington Post. He says the rule may be the first of its kind in the U.S.

“I think we’re setting the stage for the rest of the nation with this,” McElveen said. “It’s a dawning of a new day in student activism, and school systems everywhere are going to have to be responsive to it.”

Anyone want to guess how long it will take before there is a protest to demand more protest days? In the short run, the images in the tweets below make it pretty clear that the top issue will be climate change. My guess is that gun control will be the runner-up.

Fairfax County Public Schools will permit students one excused absence each school year for “civic engagement activities,” Such activities might include marches, sit-ins or trips to Richmond to lobby legislators. https://t.co/XDpFaxKadP

Students in Virginia’s largest school district will be allowed to skip class in order to protest.

Students in seventh through 12th grades in Fairfax County Public Schools in Northern Virginia will be excused one absence every school year to participate in protests: https://t.co/N4k9yVSWpT pic.twitter.com/krUpnLDzJi

Here’s a video report from FOX 5 in DC:

It’s no coincidence that this is happening in Virginia, where Democrats recently took control and are simultaneously making a hard push for new gun control policies.

Gun rights supporters in Fairfax County might want to put this new approach to the test by organizing a student protest in favor of the Second Amendment. Let’s see how serious liberals are about getting children involved in public policy debates.

Nope, the school officials that allowed this need to be replaced.

notamemberofanyorganizedpolicital in reply to Tsquared. | December 28, 2019 at 3:31 pm

But but but….it’s not like it will make them any more ignorant and un-educated……

School administrators included in that……

I’m waiting to see what happens if there is say a pro-life rally.

On the nose. One day a year accepted leave for “Civic engagement activities” is a ‘Yeah I can see that as a positive for our cell phone entranced children.’ Get ’em out of the classroom and into some sort of civic organization working with other neighborhood people things, it’ll be good for the little crumb crunchers.

Now when it is implemented, if things like a Green Thursday Save Our Planet rally are fine, and Planned Parenthood’s Women’s Choice day are accepted, but the local Kiwanis club pancake feed or Boy Scouts Jamboree are turned down, we’ll see.

Or an anti-gun control and confiscation rally.

As it happens, there is a huge pro-life rally, the March for Life, in Washington, DC, for which Fairfax County is a bedroom community, every year—in January! This year it is on Friday, Jan. 24. Unfortunately, and I am sure to the vast regret of the folks who implemented this generous school-skipping policy, they set the policy to be effective on Monday, Jan. 27. I’m sure this is just a coincidence.

Fairfax County was a very liberal county when I lived there (most of my life). I predict that their students will be attending gun control and climate change events.

It is unfortunate that children are not create equal, that starts with genes, genes which define the child’s potential. Then their potential is further define b the nature of their parents. oes their mother do everything she can during gestation to improve the child’s prospects? Do both parents strive to stimulate the child?

Do they give the child the ideal balance of love and discipline? Are they committed to place their children’s best interest above their own for twenty or more years?

Well, each day spent out of class reduces the stupid they get in class, so there is that.

“Gun rights supporters in Fairfax County might want to put this new approach to the test by organizing a student protest in favor of the Second Amendment. Let’s see how serious liberals are about getting children involved in public policy debates.”

That was my exact thought, too.

Going straight up into the teeth of the beast, are we?

No, that’s failing your setup. You need a ‘School age’ point on which to stand for your argument to have any weight. CC licences in VA are age 21 and up. Junior (i.e. supervised) hunting licences start at 12.

So instead of a 2A rally, have a day-long Hunter’s Safety Rally. Then when the frothing loons come at you screeching about how cruel it is to expose children (For the Children!) to the evils of hidden guns, you can counter with the safety aspect of it, the importance of respecting guns while in the field, the number of deer harvested by school-age hunters which cuts down on traffic accidents, et al…

This is one more nail in the coffin of the idea that public schools are anything but indoctrination centers for progressivism.

The children are not supposed to be there to do “civic engagement”. They are there to learn enough civics (and other important subjects, like math, history and literature) so they can be intelligently engaged as an adult.

On top of which, no one should be giving much credit to these people’s opinions – they are minors and unable to vote for a damn good reason.

Lastly, how does this square with the idea that teachers always complain (at least the loud ones with union affiliation) they don’t have enough time in the classroom to teach what they need to teach?

It’s no coincidence that this is happening in Virginia Fairfax Co
Small fix. They are one of the major drivers* of the bluing of Virginia.
(* They’re the largest school district in Va? When Hampton Roads is huge and densely populated? That’s all those DC rats’ spawn filling up the schools there. Reduce the size of the swamp, and the rest of us can live in relative peace.)

Who needs an education when they are taught that the government provides for all and one only has to protest to get what they want? Scholastic “engagement” will result in inequity. Who wants that?

My wife and I pulled our autistic son out of public school over a year ago and started homeschooling him. It was one of the best decisions we ever made.

How long do you suppose that protesting (for communist-approved causes, of course) will become MANDATORY in public schools? America continues to inch towards a combination of Woodstock and Venezuela. Public education is about producing slave soldiers willing to fight and die for the Glorious Communist Revolution.

Thank you for blessing your son! How long will it be before parents stop sending their children to the government monopoly bureaucratic public school system?

We have a problem in our country, and it’s getting worse fast.

Just wait until they go to Richmond for a NRA rally.

The annual March for Life in Washington is coming up in January.

Wasn’t enough to weaponize the federal departments against normal people, now the left is weaponizing kids to do their bidding.
The left knows they’re going to be in a world of hurt as PDJT keeps filling courts and the left loses their backstops against lunacy.

In September, our students held a “walkout” to protest climate change. It was Friday, and timed to be over in time to catch the bus home. Questions were raised about the response if it was on a Saturday.
Surprise, the next Saturday was the city wide clean up. paint, clear weeds, spread mulch and pretty much get sweaty, dirty and tired. I supervised one of the sports teams. When I asked about the “walkout” I got pretty much the same response. “It was Friday. Everybody else was going, and the teachers didn’t give us any work.”

3 days too late for the March For Life. But by next year there will be a year’s record of allowing such absences, so they’ll have no excuse for refusing a student’s request to attend next year’s march.

This is a wonderful idea which should be expanded to include all employees. I would appreciate a day off so that I could protest the protests of the perpetually unemployed protesters.

Will they allow students to attend the March for Life or supporting the 2nd amendment? I don’t think so.

Another policy that you would never see get enacted during a democrat presidency.