Gaetz: “I would just say, no member, Republican or Democrat, should be subject to that.” 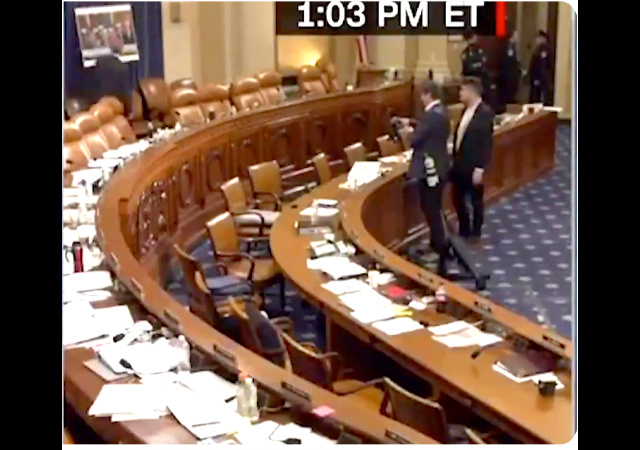 Republican Rep. Matt Gaetz addressed the situation when he sought recognition from Chairman Jerry Nadler on Thursday afternoon. “Before I make my point, during the break, a Reuters photographer, Josh Roberts, approached the dais and took pictures of the notes [on] the desks of several of my Democratic colleagues. We noticed that, announced it to staff,” Gaetz stated. “That photographer has been removed. I would just say, no member, Republican or Democrat, should be subject to that.”

He added, “We ought to have the opportunity to take our notes, participate in debate, and have a fair discussion substantively, though.”

Jesse Lee from Speaker of the House Nancy Pelosi’s office explained the photographer took pictures of a Democrat’s desk. Roberts photographed the Bible and a few other books.

“His photos include members’ copies of the U.S. Constitution, the Holy Bible, The Federalist Papers and pieces of illegible paper that were sitting on the dais,” the person said in a statement. “He broke no rules and left the hearing voluntarily.”

Why would one not expect it. It’s so similar to what the FBI and Democrats did.

Throw out the camera, not the photographer.

Have we learned nothing from all the mass shootings?

I demand that all of the AGs from blue states sue the camera makers! No one except the military or law enforcement (not ICE) need big scary-looking fully automatic military-style assault cameras with large-capacity memory. It is long past time for sensible common-sense camera law reform. The NCA (National Camera Association) is a terrorist organization. Whose side are you on, NCA?

The down-tick is mine and not intended. I was aiming for Reply. As long as the SD chip is 8gb or less, I’m okay with semi- auto cameras.

notamemberofanyorganizedpolicital in reply to dystopia. | December 13, 2019 at 4:52 pm

I held a camera in my hands, and I wish I hadn’t. It’s as heavy as 10 boxes you might be moving, and the film it utilizes, 50 caliber, these kinds of film need to be licensed, and shouldn’t be on the street.

Does anyone really think a picture of something substantive wouldn’t have found its way into a successor to the Steele fraud?

the desks of several of my Democratic colleagues
the U.S. Constitution, the Holy Bible, The Federalist Papers
Bull***t.
Any Democrat with all those things on their desk at once would spontaneously combust.

I’m not buying that claim about the Federalist papers. It’s obvious they’ve never read them.

What democrat? Ask him or her to identify anything in the Federalist Papers or one verse in the Bible. They’ll look back with blank stares.

Or like the witches of old, they’d recite the quotation backwards.

Since Reuters is a foreign operation, shouldn’t the photog be charged with espionage?

What is fascinating is that Reuters claims that ‘he broke no rules….’. So in the halls of Congress one is permitted to invade the privacy of our representatives. So I guess Schiff was A-OK

What is even more fascinating is that in the picture and the video you see what I presume to be three uniformed security guards standing by the door talking as the Reuters employee is seen approaching the desk with a colleague and then photographing the documents. And the unformed security does nothing while it all takes place. What gives with that.

The life of a government employee!

notamemberofanyorganizedpolicital in reply to MarkS. | December 13, 2019 at 4:36 pm

….of a Democrat government employee……

I suspect the idiot thought he was photographing republican notes, otherwise they would have been published already.

Would rather he’d taken a photo over the shoulder of congressman Cedric Richmond who was watching golf on his laptop. See https://twitchy.com/brettt-3136/2019/12/12/so-solemn-so-prayerful-congressman-caught-watching-golf-on-his-laptop-during-impeachment-markup/

I dunno but a leftist taking a picture of a “bible” on a leftist’s desk probably won’t pass the smell test with most people. Why on earth would a democrat have a bible visible on his desk in this anti-christian political environment? Particularly a democrat?

This explanation makes no sense. He took a picture of something he wasn’t supposed to and got caught.

A Democrat with a Bible? Perhaps it’s for use as a booster seat for Nadler.

notamemberofanyorganizedpolicital in reply to MrE. | December 13, 2019 at 4:40 pm

Pete is short after all……

Only if they’re in the womb.

The Reuters statement is worthless. A failing grade in Logic 101.

That’s why they say BEVER leave documents out on the conference table after a meeting. This room should be secured during breaks. Good Lord, Government officials get away with things that the rest of us in the private sector would never do, under penalty of termination.