“Investigators believe the two dead attackers … identified themselves in the past as Black Hebrew Israelites, a movement whose members have been known to rail against whites and Jews,” reported ABC News. 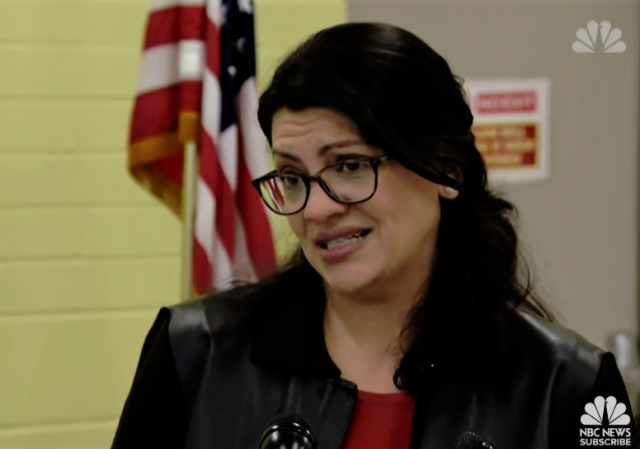 Rep. Rashida Tlaib (D-MI) posted and then quickly deleted a tweet this morning erroneously blaming white supremacy for the Tuesday mass shooting at a New Jersey kosher market that left four people dead, including a detective.

Before we get to her tweet, here’s a recap detailing the full extent of what happened Tuesday:

At least four people, including one police officer, were killed in a shootout in Jersey City on Tuesday. The incident began near a cemetery in a residential neighborhood and ended with a prolonged gun battle between police and two suspects who barricaded themselves inside a Jewish grocery store.

Officials said the two suspects were killed in the gunfight.

It started when officers engaged two people who looked suspicious near the cemetery. Veteran detective Joseph Seals died from injuries sustained at that scene.

The suspects then fled in a stolen truck to the Kosher grocery store, where they shut themselves in and spent hours exchanging rifle fire with police and other law enforcement officers. After the shootout, five people were found dead at the store, including two believed to be the suspects, Jersey City Police Chief Michael Kelly said Tuesday night.

Although New Jersey’s attorney general says it’s too early to determine a motive, some believe that the suspects deliberately targeted the store:

Fears that a deadly shooting at a Jewish market in Jersey City was an anti-Semitic attack mounted on Wednesday as authorities recounted how a man and woman deliberately pulled up to the place in a stolen rental van with at least one rifle and got out firing.

But Mayor Steve Fulop said surveillance video of the attackers made it clear they targeted the kosher market, and he pronounced the bloodshed a hate crime against Jews, as did New York’s mayor and governor.

Also, investigators believe the two dead attackers — who were thought to be a couple — identified themselves in the past as Black Hebrew Israelites, a movement whose members have been known to rail against whites and Jews, according to a law enforcement official who was briefed on the matter but was not authorized to discuss the case publicly and spoke on condition of anonymity.

In addition, authorities have found social media postings from at least one of the killers that were anti-police and anti-Jewish, the official said. The FBI on Wednesday searched the Harlem headquarters of the Israelite Church of God in Jesus Christ, which is the formal name of the Black Hebrew group, according to the official.

Here are photos of David Anderson, 47, and Francine Graham, 50, the now-deceased suspects:

Here are photos of the shooters. pic.twitter.com/2eLxMlRSBO

This information had been widely reported before the now-deleted tweet Tlaib posted this morning, in which she wrote, “This is heartbreaking. White supremacy kills”:

After (presumably) finding out who the actual perps were, did Tlaib post a corrected tweet afterward still noting “this is heartbreaking”? As of this writing, no.

On hearing Jews were killed.

On hearing the murderers were black supremacists.

Why is the murder of Jews only heartbreaking when she can blame white supremacists? pic.twitter.com/4BbKpFyWJN

In addition to Detective Seals, the other three victims are Mindy Ferencz, 31; Moshe Deutsch, 24; and Douglas Miguel Rodriguez, 49. Read more about them here, and please remember their families in your thoughts and prayers.

She really IS a special kind of stupid.

notamemberofanyorganizedpolicital in reply to The Friendly Grizzly. | December 12, 2019 at 2:35 pm

Sorry, accidently missed that at the very bottom of the post.

Rashida is full of Rashita.

notamemberofanyorganizedpolicital in reply to walls. | December 12, 2019 at 3:17 pm

“SPECIAL KIND OF STUPID”…..{ Very appropriate, & 100% right on}…..This “Tlaib”, is a typical biased, & hateful Libretard, that is a self-serving “enemy of America”….Obvious by her ill-timed, & low IQ statement upon her election: {quote} I will impeach the Mother F**ker!…{ un-quote} Pandering to a mostly black crowd….{ like Hillary CLinton dows so well}…..America, has no place for this type of “RAW, & HATEFUL” mentality…..All this brought here, by Bath House Barry….{ Muslim from Kenya, then Chicago}…..Brought hundreds of thousands of this Tlaib mentality/Muslim, & distributed them into Conservative/Republican stronghold areas, to disrupt, & further his corrupt political agenda!…..{ TREASONOUS!}

She’s definitely a few ants short of a picnic.

1/4-bubble out of plumb.
One potsticker shy of dim sum.
Not firing on all cylinders.

So did Behar. The lefts counterpart myth to detract from Antifa.

I believe this was the group that was yelling at the Pro life demonstrators from Sandmann’s school on Capitol Hill.

Yes, it was. They also stand in Times Square yelling at random passersby, but especially at Jews, since they believe they are the real Jews and we are impostors.

healthguyfsu:
There is something jarring about this description:
“I believe this was the group that was yelling at the Pro life demonstrators from Sandmann’s school on Capitol Hill.”

Yes, this was a group of young men who had participated in the March For Life earlier in the day. However, when the Black Hebrew Israelites engaged them in a shouting match, they were just standing around at their rally point, waiting for the bus. The Black Hebrew Israelites didn’t engage them while they were actually protesting against abortion. The description seems to me to be unsettling because what happened is more egregious than the description. To march in a protest and be yelled at by those who disagree on the issue being protested is one thing. To be standing around waiting for a bus and be yelled at by a hostile crowd, whose slurs were not about the issue being protested, is another thing altogether. This was the latter case. My recollection is the Black Hebrew Israelites jeers were more personal in nature.

A mind is a terrible thing to waste.

If the 2 nj bros had maga caps on like the the 2 Jussie bros in Chicago Tlaib would be spot on. News media entertainment colleges and dem party including about 80 percent of us Jews would agree.

notamemberofanyorganizedpolicital in reply to bobinreverse. | December 12, 2019 at 2:41 pm

But they’d have to be out in about minus 20 degree weather at 3AM looking for a footlong………..

DaveGinOly in reply to notamemberofanyorganizedpolicital. | December 14, 2019 at 5:48 pm

I believe Jussie is a bit old for Jared.

Well, at least it wasn’t her people. Which is the #2 most likely possibility. Around here (NY/NJ) when you hear of violence against Jews the #1 most likely perps are blacks, and #2 are Moslems. White Supremacists exist, so one must always allow room for the possibility that it could be them, but it’s not very likely. When you hear hoofbeats, think horses, even though zebras are not mythical creatures.

There are supremacists of all ethnicities, but most supremacists are not violent. When it comes to violent crime, 15 do 50.

Why does this make me wonder if Rashida sits on their board?

Tlaib is a total arse. Big shocker there.

She blamed white supremacy erroneously only if you believe in an objective reality ruled by facts, h8rs.

We haven’t seen a pig fly, but we’re sure watching one speak.

This malignant Jew-hating and America-hating swine needs to be run out of office, poste haste.

Donate generously to any of the pig’s opponents.

She was later barred from visiting the country because of her support for the BDS movement but was subsequently told she would be allowed to visit her dying grandmother in the West Bank if she refrained from promoting boycotts against Israel while there. However, she went on to decline the offer, saying the terms set “oppressive conditions.”
—————————————–
Has granny kicked the bucket? Were white supremacists involved? Curious minds and all.

Forgot to add, if you look up ugly in the dictionary they have a drawing of her as a real picture would give kids mental health problems.

I disagree. Looking at her picture might induce nausea but real mental/emotional damage would only result if impressionable minds – of any age – were allowed to believe there is truth in her verbal diarrhea.

NJ media were all hinting at it. Then when the truth came out, they blocked all comments on their news sites. But today all their politicians are pushing their gun control agenda even though they violated current laws.

NO surprise here. Using the (often) still warm bodies of those murdered with firearms to push their agenda is the norm for gun grabbers.

Islam on the move!!

That woman is an unrepentant, rabid, ugly, grotesque anti-Semite.

Since there’s no post yet on Trump’s anti-semitism order, I’ll comment here, which seems to be the closest to on-topic.

The usual suspects are complaining, of course, because the order defines Jews as a nationality.

Mr. Trump’s order will have the effect of embracing an argument that Jews are a people or a race with a collective national origin in the Middle East, like Italian Americans or Polish Americans.

Um, yes. That is exactly what Jews are. I’m sorry if you leftists have a problem with it.

The leftist view is actually schizophrenic. They desperately want Jews to be seen as a religion, not a nationality, but they reject religion! So by their definition they can’t possibly be Jews. Which I suppose is their real goal; they want to shield themselves from antisemitism by pretending not to be Jews, by convincing the antisemites that Jews are those who believe in the Jewish religion, so they should please leave them alone.

But first of all, if they really mean that then they must give up all right to comment “as a Jew”; by their false definition they’re not Jews, so, for instance, what Israel does is no more their business than anyone else’s.

Second and more importantly, it won’t work, because the antisemites know the truth. A Jew remains a Jew no matter what he believes, or doesn’t believe. The German assimilationists learned that lesson the hard way. They tried so hard to be “Germans of the Mosaic faith”, or even “Germans of the Christian faith whose grandparents happened to be of the Mosaic faith”, and the Germans reminded them of the truth, that they were Jews anyway, because Jewish status has nothing to do with belief

Even the ADL, which under its new management functions as an arm of the Democratic Party, supports Trump on this one. That should tell you something.

Unfortunately, for her, the execrable (and misnamed) Joy Behar can’t delete the video of her making the same claim.

Dennis Miller @DennisDMZ
“If the Democrat’s are really serious about putting a truly representative member of their Party forward in 2020, they must choose Rashida Tlaib. To not do so will be sexist, Islamaphobic and not loyal to their core message.”

This cretin’s audience always seems to get a tingle down their legs when she speaks her rubbish. They’re just as guilty as she is.

Tlaib can say or do anything and will be re-elected by the sheep in her district with out any opposition. She is a lock to stay in that Congressional Seat for the rest of her life.

To paraphrase Andrew Wilkow: If you combined all the brainpower of The Squad, you still wouldn’t have enough to make an idiot.

That may hold true after extrapolating to all who voted for them.