Closer to home, earthquake swarms are being reported near Mt. Rainier and in New Madrid Seismic Zone. 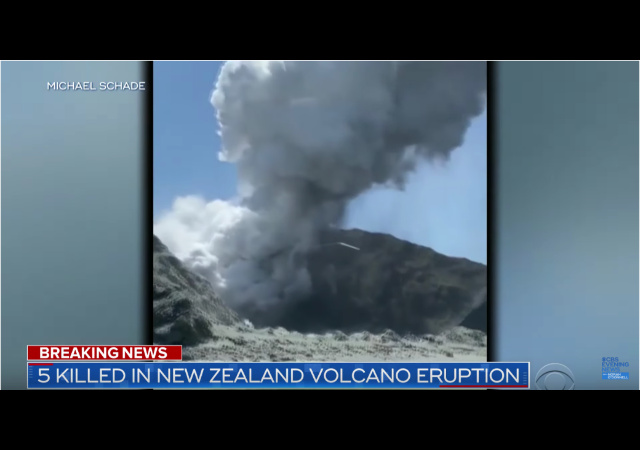 A volcano off the coast of New Zealand erupted, killing five people and injuring 31 others.

The eruption happened at White Island, just off New Zealand’s coastline, at about 2.15pm local time on Monday.

A second, slightly smaller eruption went off at 3.45pm, according to local fishermen.

New Zealand’s Prime Minister Jacinda Ardern addressed the incident on Monday afternoon, saying: ‘At this stage we believe around 100 people were around or on the island at this stage not all of them are accounted for.’

A rescue operation is currently underway to save people who were pictured inside the crater at 2.10pm, minutes before the explosion, on the White Island Crater Rim camera.

About 100 people were believed to be on or around White Island when it erupted. Reports indicate 47 people from seven different countries were on the island. Officials did not specify the nationalities of those who died.

GeoNet agency said a moderate volcanic eruption had occurred and raised its alert level to four, on a scale where five represents a major eruption.

Police were asking people to avoid areas on the North Island that were close to the eruption, including the Whakatane Heads and Muriwai Drive areas.

GeoNet says it is New Zealand’s most active cone volcano and about 70 percent of the volcano is under the sea.

Meanwhile, a little closer to home, 20 small earthquakes shook near Mount Rainier this past week.

They were all within 8.2 miles of the volcano, most of them closer.

Mount Rainier is one of Washington’s active volcanoes, but earthquake experts say this swarm of quakes is not cause for alarm.

This isn’t the type of earthquake activity that would lead up to an eruption, said Harold Tobin, director of the Pacific Northwest Seismic Network, which is based at the University of Washington. They track earthquakes across the Northwest.

The quakes have been small and fairly shallow. For example, a 0.4 magnitude Monday afternoon and a 1.2 magnitude that morning.

“For us to start to be concerned about an imminent eruption we would have to see a sort of persistent swarm of earthquakes,” Tobin said. “We would tend to see them extending up and down in depth, suggesting that there’s magmatic movement.”

Last week, there were also reports of earthquake swarms associated with the New Madrid Seismic Zone in the Midwest.

A series of quakes, including the 2.1 temblor, began shortly after 2 a.m. central time on Friday about 1.3 miles southwest of Ridgely, the USGS reported. They continued hourly until just before 5 a.m.

Another 1.1 quake hit around 7:30 a.m. More followed on Saturday, the last of which struck at 2:11 p.m. central time, according to the USGS.

All 15 were within roughly two miles of Ridgely.

Ridgely is home to just 1,657 people, according to the U.S. Census Bureau, and sits less than four miles from the banks of the Mississippi River.

It’s also part of the New Madrid Seismic Zone — which the Missouri Department of Natural Resources refers to as “the most active seismic area in the United States, east of the Rocky Mountains.”

As a reminder, the New Madrid earthquakes of 1811 and 1812 changed the course of the Mississippi.

I might suggest our Extinction Rebellion friends head to the volcanoes and seismic zones that might actually cause climate change and extinction.

“I might suggest our Extinction Rebellion friends head to the volcanoes and seismic zones that might actually cause climate change and extinction.”

Perhaps they can pug the volcano and actually be of use.

Meant plug, and which this site had an edit feature.

Tragically, a young couple from VA, on their honeymoon, and have been burned. The man was burned over 80% of his body. Pray for them.

I might suggest our Extinction Rebellion friends head to the volcanoes and seismic zones that might actually cause climate change and extinction.

Clearly it is the result of climate change. Volcanoes never erupted before…

Also, it is Trump’s fault. Another reason to impeach him.

I don’t know. Standing on the cliff edge and watching lava pour into the ocean below in 1998 was a pretty memorable 15 seconds.

And we briefly considered a midnight, full moon, no headlamps climb of St Helens over the Thanksgiving weekend when it started to erupt again back in the 2004 time period. Besides death, there was also a potential $5,000 fine for being in the exclusion zone, but climbers have never been known for smarts.

The papers on last summer’s fun at Kilauea came out this week in Science. Why do they always have to close down a place just when it gets really interesting? 😉

I totally want to visit an active volcano. The thing is – if I was in New Zealand, I would totally have gone on that tour. I would also go KNOWING that it is an active volcano, and there is a risk involved. I would not blame the tour company or the .gov for licensing the tour company if it erupts. But then, I was raised to be responsible for my decisions, which, I believe, is also 80% of the reason I was not raped in college – I understood the risks of drinking and avoided situations where that was a risk.

No alcohol induced pregnancy? How many families have started that way?

Evolution in action. I can see scientists taking the risk in order to understand volcanic activity, others doing so is the ultimate in stupidity.

As we used to keep telling each other when I was working with ion implanters which flooded the lab with radiation, the Inverse Square Law is your friend. In the case of volcanoes it’s just inverse, not inverse square, but distance is still pretty friendly.

When Pliny the Elder saw the glare of the Vesuvius eruption on the horizon, he commandeered a galley to row him there so he could get a better look and take some data. Turned out to be a bad move.

BTW, this is a great read for anyone wanting to know more about volcano science.

Seriously, is this a fun job or what?

And I do want to score one of those USGS shirts.

Not sure why the Mt Rainier events are newsworthy. We get little quakes like that quite often.

From my understanding, the real danger of Rainier is the instability in the Carbon Glacier foundation. If a slide is initiated, even a relatively small one, the friction and heat will be enough to melt some ice and then everything, I guess, reverse snowballs, from there. Mt Adams had a 3 mile long, 1/4 mile wide slide about 20 years ago, so these things happen out of the blue. I love the big Earth Science stuff as an avocation. It is amazing how much that we still don’t fully know about this rock we live on. In some ways it must be easy to be a climate activist because one’s entire outlook can be based on the that day’s weather forecast. But to take it all in with the geological time perspective is a much more difficult task. Probably the best documentary I have watched recently was a radar mapping of the bottom of the Great Lakes. So much has happened in just the last 10,000 years, and amazingly, with absolutely no human meddling. To me, the volcanoes are a constant reminder of just how little control we have over this planet. When Mt Mazama erupted about 7000 years ago to leave Crater lake as a reminder, the ejected material was enough to cover 3500 sq miles with 50 ft of ash. Imagine a 4 story apartment building that covers 7 average sized counties in Ohio. That is a lot of rocks. Also notice how the climate people have been completely silent on the vast amounts of gases released during the 3 month long Kilauea event. By their models, we should all be dead by now. And when Cascadia lets loose, hopefully I can finish this post before then, climate change will be the last thing people in the PacNW are thinking about, including the loonies.

Interesting comment. I have always wondered how much the output of an active volcano, or even the recent forest fires in CA, compares with what (little) man contributes. Then there is the Yellowstone caldera. Sadly, according to climate experts AOC and Greta, we only have until 2030 to figure out how to stop volcanoes and forest fires; and, according to the Paris Accord, China has to do little to help. Ironically, there is not enough political energy in an interesting initiative like fusion power for it to get traction. Tilting at windmills is their speed.

“I have always wondered how much the output of an active volcano, or even the recent forest fires in CA, compares with what (little) man contributes”

I remember reading an article about a study by a Washington or Oregon university done on the Pinatubo eruption that occurred in 1991. The one item that stuck with me was the volcano emitted gasses equivalent to industrial pollutants at the rate of 100 years of global human emissions every 6 hours. A few years ago while debating someone on man made global warming, I attempted to find that article and could not. Instead I found an article which basically said that data was misinterpreted by those not well enough educated to understand emissions are different when they come from a volcano.

Washington’s response was to put a 2 lane highway which moves at 10 MPH as the escape path where the carbon river runs.

Little known fact: if Mt St Helens had blown the way geologists said it was supposed to, it would have blown away Vancouver and PDX. At least according to this guy… https://www.pdx.edu/profile/meet-professor-scott-burns

We got lucky it didn’t.

Next time you decide to go inside a volcano crater…. DON’T!