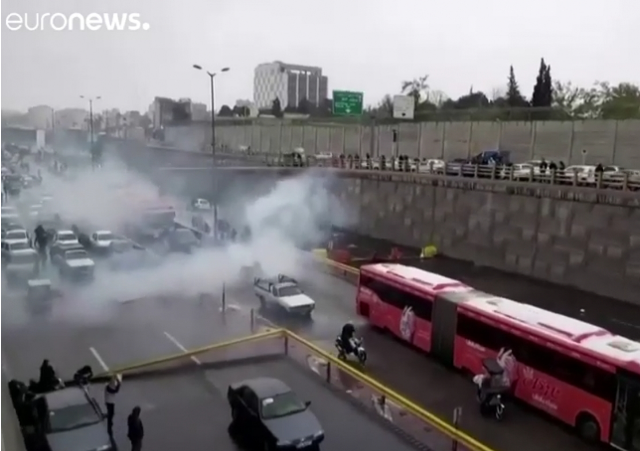 “Verified video footage show snipers shooting at people from rooftops,” the newspaper confirmed. “In at least one instance, a helicopter had been used for the shooting.”

“Verified video footage, eyewitness reports and information from activists outside Iran reveal a horrific pattern of illegal killings by the security forces,” the German daily added.

The protests, which began last Friday after the Islamic regime announced a threefold increase in fuel prices and imposed strict rationing on gasoline, have now erupted in over 20 cities, including Iran’s capital Tehran. The regime has blocked people’s access to the internet since Saturday, enforcing an information blackout on the country’s 80 million people.

Amnesty International reports that at least 106 people have been killed in 21 cities across Iran during nationwide protests ignited by a sudden hike in fuel prices.

The UK-based human rights organisation added that the actual death toll may be even higher, as unconfirmed reports have put the number as high as 200.

The United Nations also expressed concerns that a “significant” number of people may have been killed in the violent crackdown.

Experts say the numbers make sense, judging by the images that have emerged from the violent crackdown of protests by security forces in multiple cities.

Hosein Ghazian, an Iranian sociologist and pollster based in Washington, said that he trusts Amnesty and expects the death toll to be even higher than what has been reported. “Usually at protests everywhere around the world the actual number of people who get killed is higher than the number that gets verified,” Mr Ghazian told The Independent.

“If necessary we will take decisive and revolutionary action,” the Islamic Guard warned.

106 protesters in 21 cities were killed over the course of the protests in Iran. Hundreds of people have been injured & more than a thousand arrested. We should all stand with the Iranian people who desperately want a better life away from the Iranian regime. #FreedomForIran

The sudden move by the oil-rich regime to ration gasoline and hike fuel prices is a direct result of President Donald Trump’s strategy of “maximum pressure” against Tehran. While the regime thrived under the Obama administration, which handed billions of dollars to Tehran for signing the nuclear deal, the current administration has reinstated stiff sanctions against the ruling Mullahs.

After President Trump withdrew the U.S. from the 2015 deal, the sanctions have crippled Iran’s state-run oil, shipping, and banking sectors. The U.S. government implemented the sanctions against the regime’s top brass and the IRGC, which controls critical sectors of the Iranian economy.

DC-based Foreign Policy journal, usually critical of the U.S. president and his policies, admitted that “Iran protests suggest Trump sanctions are inflicting serious pain.” The policy journal highlighted the context behind the surging unrest triggered by the “dire condition of the Iranian economy” being “hammered by U.S. sanctions:”

The latest explosion of popular protest in Iran began on Friday after the government rescinded fuel subsidies, which essentially tripled the price of gasoline—a painful blow to millions of ordinary Iranians already struggling to survive a debased currency, high unemployment, and a shrinking economy. But the demonstrations that began over fuel subsidies quickly became a sweeping, nationwide protest against the Iranian regime itself, with outbreaks in dozens of cities in every Iranian province, targeting especially government buildings such as police stations and state-owned banks.

The government’s response has been much more brutal than in previous outbreaks of protest, such as in 2017-2018, including a near-total shutdown of the internet and unrestrained use of violence by security forces. Groups including Amnesty International have documented at least 106 deaths during the protests, as regime security forces have used live ammunition to target demonstrators. The brutal crackdown is both evidence of the regime’s desperation at its own inability to sway popular opinion and a result of watching weeks of similar deadly protests (also directed against Iran) in Iraq and Lebanon.

In the ongoing standoff between the White House and the Iranian regime, the European Union and Democratic Party have sided with the Mullah of Iran.

German Chancellor Angela Merkel is instrumental in creating the EU-Iran trade mechanism, a payment system that allows European governments and businesses to keep trading with Iran by bypassing of U.S. sanctions. French President Emmanuel Macron has offered $15 billion in credit to Tehran to save the fledgling regime.

Closer to home, former Secretary of State John Kerry has reportedly been busy advising the Iranian regime on how to maneuver around the current U.S. policy. Almost all Democratic candidates are in favor of restoring the Obama-era deal with Iran.

Democratic frontrunner Joe Biden has accused President Trump of “walking away from diplomacy” by pulling out of the deal with the Islamic regime that guns down its own people in broad daylight and fiances jihad terrorism worldwide.

Bernie Sanders declared he “would re-enter the agreement on day one of my presidency.” Elizabeth Warren, Pete Buttigieg, and Kamala Harris have echoed similar views.

Now is a good time to start destroying hydroelectric dams and water reservoirs. Drop fliers telling the Iranians they should put mullah heads on pikes.

notamemberofanyorganizedpolicital in reply to JusticeDelivered. | November 21, 2019 at 11:43 am

Tom Servo in reply to notamemberofanyorganizedpolicital. | November 21, 2019 at 1:02 pm

We wish that were so, but China and Stalin’s Russia before them show that you can hang on to power indefinitely as long as the Army and the Security forces are on your side, and you’re willing to kill civilians at random.

Iran won’t break until at least part of the Army decides to revolt, and I don’t see any signs of that happening yet.

beagleEar in reply to notamemberofanyorganizedpolicital. | November 21, 2019 at 3:06 pm

Only in the fantasy version. One side has guns, helis and organization, the other has rocks, curses and no control over their own communications – gov can shut off your phone. Since most will be cell phones, they’re also tracking devices that inform on who went to protests.

With sufficient and sufficiently patient force, repression works. Christianity was born in the Middle East. Outside of Israel, how many Christians are there now in M.E? Read the hadith and Koran about the condition of Christians in Dar-al-Salaam. It is not immediate massacre of all, that would create resistance. It’s more clever than that, and more effective.

Destroying vital infrastructure like that will make it that much harder to pick up the pieces when the mullahs are gone.

Instead, I would arm the protesters so they can fight back, including some Stingers to take down those helicopters.

Turnabout is fair play… those pricks have been supplying terrorists and encouraging them to attack the US and our allies for decades. Time to turn the screws and finish them off for good.

Even if all the Mullah’s are exterminated, There will still be lots of brainwashed Muslims left. I question rather or not it is wise to leave much of the infrastructure. The world needs Iran to be neutered, pull their fangs.

In light of all if this their attack on Saudi Arabia makes sense. They wanted to cripple the Saudi’s oil production (which they partially succeeded at) in order to inflate oil prices to save their own skins. It didn’t work. American fracking crippled the effort.

I think this is going to be the Chinese solution to the Hong Kong issue. Brutality in isolated doses and not allowing any martyrs to develop. The whiners in this country who constantly complain about our repressive government haven’t a clue what an oppressive government is really like.

Wonder how much of that hardware was paid for with Obama’s pallets of cash??

Several quick points:
Arming the protesters is a dumb idea because it will just let Iran make the *semi-legitimate* claim that the ‘Great Satan’ is behind any future violence for the next several decades.
Same for any military strikes against infrastructure.

We still need to support them, just not quite that way.

I agree – arming anyone there is foolish unless you’re going to give them enough to outgun the entire Iranian Army, since that’s who they will be fighting. Not to mention that this policy has failed almost everywhere we’ve tried it.

(last time we tried it – when Hillary and John McCain worked together to send Libyan weapons to “Freedom fighters” in Syria, and all we got in return was a dead Ambassador. Oh, and the “Freedom Fighters” ended up giving all of the weapons to ISIS.

The US Marine barracks in Beirut?
A US Embassy?
The Khobar Towers?

Yeah, we don’t really need to imagine it at all, do we?

This is why we need to pound them into the stone age. Make an example or Iran, doing so will send a message.

Maybe a show of solidarity and support for the Mullahs may quell dissent if only Carter, Clinton and Obama could fly to Iran and hold hands with the Mullahs. A little Obama cash left lying around could be used.

Don’t leave Janes Taylor our of this…

So, will the media blame the ones doing this or Trump?

These are the people that got Obama’s cash and are using it to pay for murder. That blood is on his hands.

Smuggle in rockets so they can shoot back!

“ Closer to home, former Secretary of State John Kerry has reportedly been busy advising the Iranian regime on how to maneuver around the current U.S. policy.”

Isn’t that a rather serious crime? Why is he free to do that??

Certified member in good standing of the Deep State. Glenn Beck discussed the Obama-Clinton civil society initiative which was to be so embedded at State Dept that no president could undo it. Entrenched, fortified and .. as we see now… actively protected. The shadow state in full power.