I think Page spoke out now because the IG discovered evidence “that an unidentified lower-level FBI lawyer falsified a key document used to obtain a secret surveillance warrant against a former Trump adviser.” 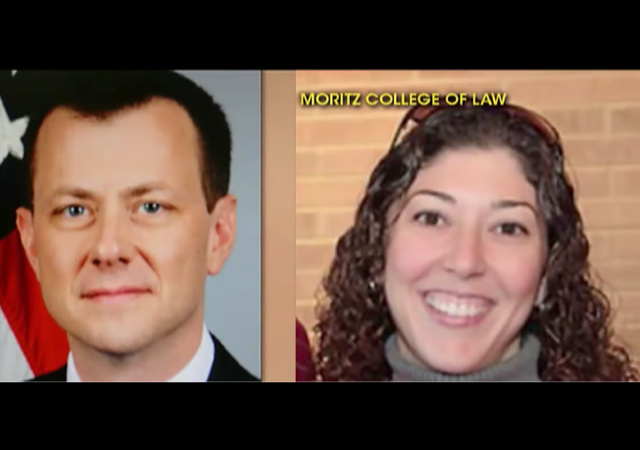 The Daily Beast sat down with Lisa Page, the former FBI lawyer and mistress of former FBI agent Peter Strzok, a week before the Department of Justice will release its inspector general report into FBI misconduct.

Page claimed she came forward now because President Donald Trump mocked her, but the sympathetic piece seems more like a way to get ahead of any damning information in the IG report.

Page remained quiet for the two years after reports surfaced of her anti-Trump texts with Strzok. Both expressed fear that he’d win in 2016, which led people to believe a coup would take place.

Can you honestly blame them? In one exchange, Page asked Strzok if Trump really could become president. Strzok said, “No. No he won’t. We’ll stop it.”

Author Molly Jong-Fast (author note: I am friends with Molly) asked Page why she decided to speak out now:

“Honestly, his demeaning fake orgasm was really the straw that broke the camel’s back,” she says. The president called out her name as he acted out an orgasm in front of thousands of people at a Minneapolis rally on Oct. 11.

That was the moment Page decided she had to speak up. “I had stayed quiet for years hoping it would fade away, but instead it got worse,” she says. “It had been so hard not to defend myself, to let people who hate me control the narrative. I decided to take my power back.”

Trump said at the rally, “I love you, Lisa! I love you so much! Lisa, she’s going to win one-hundred-million-to-nothing. But just in case she doesn’t win, we’ve got an insurance policy!”

Those on the right say Trump did not sound orgasmic. In all honesty, it seems like he’s taking on the part of Juliet expressing her love for Romeo.

Page continued: “It’s like being punched in the gut. My heart drops to my stomach when I realize he has tweeted about me again. The president of the United States is calling me names to the entire world. He’s demeaning me and my career. It’s sickening.”

Separately, Page tweeted, “I’m done being quiet.” In her interview, Page went on to call the president’s remarks “intimidating.”

“But it’s also very intimidating because he’s still the president of the United States,” Page said. “And when the president accuses you of treason by name, despite the fact that I know there’s no fathomable way that I have committed any crime at all, let alone treason, he’s still somebody in a position to actually do something about that. To try to further destroy my life. It never goes away or stops, even when he’s not publicly attacking me.”

According to Page, Trump’s words affect her every day:

“I’m someone who’s always in my head anyway – so now otherwise normal interactions take on a different meaning,” Page complained. “Like, when somebody makes eye contact with me on the Metro, I kind of wince, wondering if it’s because they recognize me, or are they just scanning the train like people do? It’s immediately a question of friend or foe? Or if I’m walking down the street or shopping and there’s somebody wearing Trump gear or a MAGA hat, I’ll walk the other way or try to put some distance between us because I’m not looking for conflict. Really, what I wanted most in this world is my life back.”

Maybe don’t be so sensitive about it? Maybe don’t have an affair with a co-worker? Maybe don’t send texts that people could easily interpret as a coup and a conspiracy? Maybe don’t act like electing Trump is the end of the world?

Did this force Page to speak out? Or is it the fact that the IG discovered evidence “that an unidentified lower-level FBI lawyer falsified a key document used to obtain a secret surveillance warrant against a former Trump adviser?”

To me, Page wants to come across as sympathetic as a way to lessen the blow over the IG report. We do not know yet if the IG will name her or Strzok as being the ones who committed any crimes.

Trump has done nothing to discredit Page, Strzok, or the FBI. They did it to themselves. IG Michael Horowitz concluded in a previous report that “the anti-Trump and pro-Clinton messages from Strzok, Page, Clinesmith, and two other FBI employees ‘brought discredit to themselves’ while harming the bureau’s reputation and sowing doubt on the impartiality of the FBI’s Clinton emails investigation.”

Horowitz stressed that “damage caused by their actions ‘goes to the heart of the FBI’s reputation for neutral fact-finding and political independence.'”

A reminder that Robert Mueller removed Peter Strzok from the Special Counsel investigation because of his texts with Lisa Page https://t.co/qZ5CjUZrtf

“I am informed by the DOJ IG’s office that I’m under investigation for political text messages and honestly, I have no idea what they’re talking about it.”

You’re not a victim… but nice try.

Strzok’s wife must have felt the same way after finding out about the affair. https://t.co/946tidF5pV

This condescension and ad hominem combined with a refusal to grapple with any of the litany of issues concerning the conduct of Lisa Page in conjunction with her colleagues—while you’re trying to make her a sympathetic victim coincidentally on eve of IG report—speaks for itself https://t.co/4PQl7IbHLL

I love the top picture of Page because it’s cropped from a picture of her posing with her hubby. That has to be a gut punch to him every time he sees that picture.

Are they still married? If I were the husband, I’d drop her like a hot potato.

Once you go Pro-Choice… Social Liberalism.

… trying desperately to cover her ass.

New definition for victim: To be caught in the act.

Lied to the court. Part of a corrupt institution..and too stupid to turn State’s evidence. They believe between the corrupt FBI and DOJ along with Obama judges Howell and Berman (and Obama AG Liu) that no one can touch them.

notamemberofanyorganizedpolicital in reply to puhiawa. | December 2, 2019 at 1:20 pm

America’s intelligence agencies—from the FBI and CIA to the NSA and more—are arguably the greatest threat to constitutional government today.

Author Molly Jong-Fast (author note: I am friends with Molly)

Well that’s a shame, you shouldn’t be. That is one nasty, vicious piece of work right there. Sure, she’s probably fun in person, so were plenty of the guards at Treblinka.

Actually, I am happy that they are friends so Mary can hopefully deliver our messages directly to Molly.

Mary, if you read this, the next time you speak to Molly, please tell her that Patrick Bateman is requesting that she seeks professional help for her severe case of TDS. Thank you.

The public has short attention spans. The sad truth is that way too many people’s responses will be “she’s pretty!”, not hear that the things she did were massively illegal, and she’ll walk.

Mary, friends see that friends who need help get it–Molly has needed help for a long time–her case of TDS appears to be terminal.

She might be repulsive but do any of you remember Horowitz’s last report? He said the agents involved with the hillary e-mail made some bad decisions but with no criminal intent. Ergo, they all got off scot-free. This was after he found out that the FBI allowed all of the perps in the e-mail scandal to be in on the same meeting and did not swear any of them in! Then the FBI destroyed the electronic evidence. This tawdry woman knows this and I suspect she knows that IG Horowitz is not going to go after her. I am getting sick to my stomach just thinking about Horowitz and his “Integrity”. All we have left is Durham.

If Lisa Page thinks Trump was faking an orgasm, she has a bigger problem than she knows. Trump speech clip below.

It just tells the world where her mind is, apparently 24/7.

It reminds me of the “ammosexual” insult that “progressives” commonly hurl at gun owners. If they were so serious about it, I’d laugh.

So she feels intimidated because Trump is president. Yeah, a lot of people felt that way about Obama and the Clintons, too.

It is wrong for Trump to “pick off” federal employees one by one. Trump needs to fire them in batches.

Her advance copy of the IG’s report must show her being mildly shamed, but ultimately not referred for prosecution or she wouldn’t be running her mouth like this.

notamemberofanyorganizedpolicital in reply to Merlin. | December 2, 2019 at 7:43 pm

There is still time and lots of “discovery” yet…..

I bite my thumb at thy

When your feminist hero is someone screwing around with a married man at work, you have no hero.

If you can’t take the heat, don’t start the fire.

Is it true that her dad owned a liquor store?

Contrived victimhood posturing is the most valuable currency in the Dhimmi-crat universe. There is no other coin of the realm.

Recall pathological narcissist-diva Michelle Obama’s constant, “woe is me” play-acting, despite her having led a life of total comfort and privilege. Or, the martyrdom act and partisan antics of career State Department bureaucrat Marie Yovanovitch, another self-serving, petulant narcissist, bemoaning the fact that POTUS fired her. This despite the fact that POTUS had every right to do so, and, that Yovanovitch is still employed by the State Department in a cushy teaching gig at Georgetown.

Page’s antics are totally in keeping with the long-running Dhimmi-crat tradition of playing the victim, for ego fulfillment and for political gain.

This woman was deeply involved in criminal activity. She deserves justice but not sympathy. If you sleep with a dog, you will get fleas.

In every picture I see of Peter Strzok, he appears to be scratching himself everywhere.

When you play in the mud, don’t expect to come out smelling like a rose.