“I’m not a billionaire. I can’t fund my own campaign. And as the campaign has gone on, it’s become harder and harder to raise the money we need to compete.” 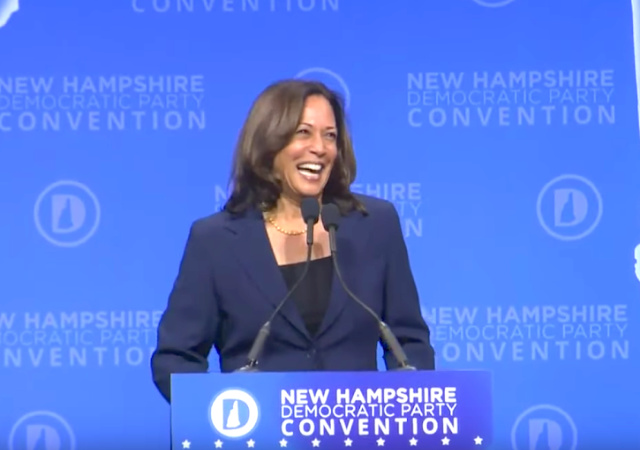 Sen. Kamala Harris (D-CA) will end her presidential ambitions after she has plummeted from the top tier.

Harris wrote a post explaining the suspension while taking shots at billionaires.

An aide told CNBC Harris informed her staff earlier on Tuesday about her plans to suspend her campaign.

To my supporters, it is with deep regret—but also with deep gratitude—that I am suspending my campaign today.

But I want to be clear with you: I will keep fighting every day for what this campaign has been about. Justice for the People. All the people.https://t.co/92Hk7DHHbR

In her post, Harris wrote that her campaign has not raised enough money. Instead of taking responsibility, she laments about others in the race:

I’m not a billionaire. I can’t fund my own campaign. And as the campaign has gone on, it’s become harder and harder to raise the money we need to compete.

Harris has slipped to single digits in the RealClearPolitics poll average.

Harris canceled a high-profile New York fundraiser on Tuesday, which led to speculations she may end her campaign. She said she canceled due to a personal matter:

Tickets started at $500 and went up to $2,800, which is the maximum a donor can give during a campaign cycle.

In November, Harris closed three of her four offices in New Hampshire in order to concentrate on Iowa.

However, Harris’s poll numbers remained low in Iowa. She sat at 2% in October behind candidates Andrew Yang, Montana Gov. Steve Bullock, and Sen. Cory Booker. She was tied with Rep. Tulsi Gabbard and Tom Steyer.

Stacey Matthews pointed out a few incidents where Harris’s staff caused more problems for her campaign such as lashing out at BuzzFeed over a critical tweet of the senator.

Just like in her post today she never took responsibility for the failures in her campaign. She played the race and sex card during many interviews, which did not help her win over members of her own party. She lost the majority of her support from females and black female voters.

Professor Jacobson pointed out in September that Harris should have ended her campaign at the debate. She failed miserably due to “canned one- and two-liners bashing Trump, and anecdotal stories about people she’s met.” Not to mention the fact she compared Trump to the Wizard of Oz.

This frees up a slot for another white male billionaire, preferably a smug, disconnected octogenarian.

notamemberofanyorganizedpolicital in reply to Pasadena Phil. | December 3, 2019 at 2:06 pm

I cannot express my sorrow at this…literally, my sorrow is at such a low ebb that I cannot see it to even evaluate it and provide a cogent expression thereof.

Perhaps she just couldn’t service as many donors and journalists as she thought she could.

Too bad Madonna didn’t offer to chip in …

notamemberofanyorganizedpolicital in reply to walls. | December 5, 2019 at 4:17 pm

I was wrong. I thought her resume (black, female) would allow her breeze to the Democrat nomination. But the polls never reflected that.

The irony is that the top two Democrat candidates (so far) are two ancient white heterosexual males who look and sound like refugees from the old Soviet Central Committee. Perhaps the Khmer Rouge wing of the Democrat Party is not yet ascendant.

I thought she would be in the top 3 oe 4 and last long enough to make it on the VP short list, but dropping out this early may ding her chances.

If the Dems don’t put an energetic African-American on the ticket, they’ll see even numbers from black voters than in 2016.

They might put Stacey [where’s the buffet at?] on the ticket …. but she’s far from energetic. You can’t cheat the laws of physics.

notamemberofanyorganizedpolicital in reply to IneedAhaircut. | December 5, 2019 at 4:16 pm

She never recovered from the moment that Tulsi Gabbard destroyed her in that debate. Because she had no answers to the things that Tulsi pointed out.

Kamala don’t hit your head too many more times on the way down.

Harris as a quitter,

“That Little Girl Is Me”

Kamala will be OK. She’ll be back on her knees in no time.

It WOULD be a acting.

Since she’s never really acted like a Senator, not holding my breath. She’ll whine about this till the end of time.

The only reason for any Democrat to run this year is to get national visibility for some future run for the presidency. I don’t think it helps much if they hold some lower-level office, such as U.S. House Rep or Senator. So anyone running for president in either party I assume has presidential ambitions.

I follow the Lichtman 13 keys method for predicting who’ll win the presidency. It clearly predicts Pres. Trump will win reelection – at least as how I assign the 13 keys. It has 9 TRUE, 2 FALSE, and 2 still OPEN. For an incumbent to win reelection, 8 keys have to be TRUE.

Admittedly, Pres. Trump’s polls have never been really strong. Lots of voters, both registered voters and likely voters, disapprove of him as president. So this prediction is a bit risky. But it almost never is wrong. (It was wrong in 2000 when it predicted Al Gore would beat George W. Bush.)

She seriously stood our as pathetic in a field full of pathetic candidates. Can’t believe anyone, not even someone as looney as Quid Pro Joe, would even consider her for the VP slot. One can hope, though.

I think Spartacus is right there with her on the pathetic scale. They could be twins or Bookends…

” I will keep fighting every day for what this campaign has been about” ME!

Really, we’ll all miss her so much (he said, laughing)

Did the dem primary voters ultimately vote heals up or heals down on Harris?

BOTH or as she would use it, any way will do if nothing else will work.

Does this leave Fauxcahontas as the last remaining woman of color in the Democrat field?

white IS a color.

A presidential campaign is quite a bit different from her earlier moves up through politics where she could advance by spreading her legs and using “God’s own money” To reach her goals.

I am surprised by her campaign meltdown, but given that the D Convention will be brokered, I won’t be surprised to see her in the VP slot on the ticket.

It’s always someone else’s fault. I’m sure it had nothing to with her crap ideas to fix the problems that her political party has created… Aside from the mattress strapped to her back, she was completely indistinguishable from her fellow Dem candidates.

The mattress was to worn to continue at her TRUE trade. Da po “HO”.

Willie Browns willing willie receptacle just dropped out of the Commiecrat field today,back to the senate with the other whores to frustrate Freedom .

I can’t take her seriously unless she’s “very clear.”